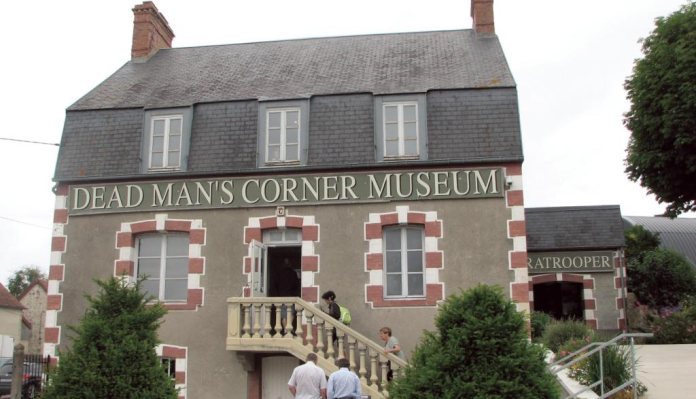 It is the function of the historian to record the actions of soldiers in battle and it is up to the museums to preserve the artefacts for the future. At the Dead Man’s Corner Museum and D-Day Experience at Saint Come du Mont in Carentan les Marais in France, in the sector of the Utah Beach landings at the base of the Cherbourg peninsula, these two roles are combined, to present an unforgettable visitor experience.

The building in which part of the museum display is housed stands on the junction of the D913 road, which was exit 2 leading from Utah Beach, and the D974 which heads northwards towards Ste Mére Eglise. The D913 bisects the areas, which on the evening of 6th June 1944, were designated as DZ (Drop Zone) ‘C’ and DZ ‘D’ where elements of the 501 and 506 Parachute Infantry Regiments of the 101st Airborne Division were due to land. As the American paratroopers were landing, the building was prepared to be heavily defended by a unit of the German 6th Parachute Regiment. It also served as a medical centre, where the wounded were treated as the fighting developed.

On the 8th of June, the house was attacked by American paratroopers from the 101st Airborne and a fierce battle ensued, during which an American tank moved forward, only to be destroyed and the crew killed. It remained there for several days after the battle and troops began to use it as a reference point for directions, describing the location as ‘… the corner with the dead guy…’. From this, it became known as ‘Dead Man’s Corner’.

Today, the building is preserved and has been turned into a museum, in tribute to the brave men who fought there. One of the units, which took part in the fighting, was Easy Company of the 2nd Battalion of the 506 PIR of the 101st Airborne Division, which has been immortalised in the book ‘Band of Brothers’ written by the late Stephen Ambrose, and turned into a superb mini-series of the same name. Many of the items on display in the museum are from the men who served in Easy Company, including a jacket worn by Dick Winters, who commanded the unit.

The museum is divided into two parts, the defended house and the D-Day Experience. The best place to begin your visit is the house, which on entering, is like stepping back in time. Each room downstairs contains a diorama, complete with realisticlooking, life-sized manikins wearing German uniforms. You are now inside the house very much how it would have looked in June 1944, complete with weapons used in its defensive function. The first room is at the front of house, where a machine gun is in position, from where it would have had a field of fire to command the road and junction.

Moving on to another which has been laid out like a command post complete with maps and radios, the atmosphere builds in a way like no other museum I have ever visited. The next room shows the treatment of wounded, with original items of equipment and medics in uniforms. A smaller room contains an excellent range of radio equipment, to show what kind of equipment was being used. Moving upstairs, the heavier equipment is displayed, such as the Panzerschreck anti-tank rocket launcher, flamethrower, machine guns and supply containers. This part of the visit alone was a great D-Day experience, but there was more and even better yet to come.

Outside the house is an example of an American M5 Stuart light tank, of the type used in the fighting around the area. Another exhibit, is an ‘88mm’ gun, which was greatly feared by tank crews and with just cause. This versatile weapon could be used against either tanks or aircraft and versions were even fitted into armoured vehicles, such as the Tiger tank.

The second part of the museum is housed in a purpose-built building looking like an over-sized Nissen hut, resembling an aircraft hangar. This is where the exhibition continues, with many artefacts of the American troops who fought in the vicinity around the house. Among the display are items from men such as Private First Class (PFC) John ‘Jack’ Agnew, who served in the HQ Company of the 506 PIR and PFC Jack N. ‘Hawkeye’ Womer.

The display cabinets in this part of the museum are fascinating and each caption contains detail, which hold the visitor’s attention and draws them on to the next caption, with even more extraordinary details. For anyone who has read the book Band of Brothers or seen the mini-series, this is where it becomes very real and personal. The photographs of the faces in the exhibition are those of the men mentioned in the book and here visitors are confronted by them and some of their personal items.

At intervals, a member of staff invites visitors to enter a ‘briefing room’ for a talk by Lt. Col. Robert Lee Wolverton of 506 PIR. The lights dim and projected on to a glass wall is a hologram with a re-enactor outlining the mission, which lay ahead on the night of 5/6th June 1944. This presentation lasts for a few minutes and is very realistic. It concludes by the presenter being distracted before turning back to address the audience to announce that the mission is on. The guide opens another door and you are ushered through to a full-sized C-47 ‘Dakota’, of the type used on D-Day.
This is the second part of the experience and something totally unexpected.

Climb a few steps and you are inside a Dakota, where you are asked to strap yourself in. The door closes and the sound of the engines starting fills the interior and the whole thing begins to vibrate. Through the windows of the fuselage can be seen film, to give the impression of taxiing down the runway past other aircraft waiting to take off for parachute drop on D-Day. The sound increases and the sense of movement intensifies and suddenly the tail lifts as though taking off. Through the window you see the sky and the ground passing as though actually flying. Loud bangs followed by the aircraft shaking simulates anti-aircraft fire and the fuselage shudders. The engine is hit and you’re on fire and crash-landing in a field in France.

The experience lasts for several minutes and is an incredible memory to take away with you. Exiting the aircraft, you can move back into the museum to see more displays and artefacts in the exhibition. It is the closest thing anyone is likely to get to the real Band of Brothers. After all that, you may want to become a paratrooper yourself, either German or American, and the museum shop can help any budding re-enactor there, also.

Most museum shops stock books and films, as does the Dead Man’s Corner Museum, but this one goes one stage further and offers an extensive range of uniforms, equipment and weapons. This is the first time I have ever seen such an enterprise. This is a case of ‘You’ve seen the film and read the book and had the experience; now you can become one of the men!’ Everything, quite literally, is available in the shop. Helmets, jackets, webbing, boots and weapons are all here. Walk in a civilian and walk out an Airborne soldier. Museums, put quite simply, do not get any better than this.

I heartily recommend anyone visiting the beaches of Normandy to visit to this museum to. To miss it is to miss a great section out of understanding what happened on that fateful night in early June 1944. The flight simulator, far from being a gimmick, adds to the experience and will be enjoyed by all ages.

The museum has ample parking facilities and is easily accessible being on the main road. It is open seven days a week but opening times vary during the year. Full details of location, opening times and facilities can be found on the website at: www.dday-experience.com.