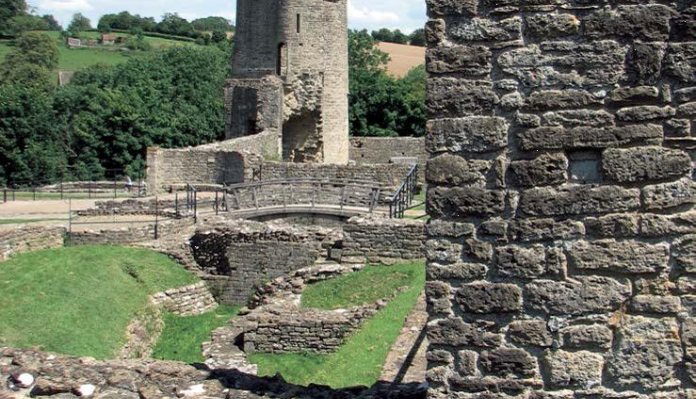 It does not always run true that every castle dating from the Medieval period must have a long history of being attacked and besieged. There was a time during an earlier period when that was true, but around the late 15th Century castles began to change and be transformed into grand stately homes, replete with all the comforts of the day. One such location where this transformation can be seen is at Farleigh Hungerford Castle, built overlooking the River Frome in the Somerset village of the same name, which, in turn, falls within the parish boundary of Norton St Philip, about 3.5-miles east of Trowbridge on the modern A366 road.

The castle was begun in 1377 by Sir Thomas Hungerford, whose family was favoured by the king, with the new residence being constructed in the style of a fortified manor. Completed in 1383, it was given the title Farleigh Hungerford. Over the years it was further developed to become evermore comfortable and the surrounding estate became a centre for hunting. Service during the Hundred Years War, especially at the Battle of Agincourt in 1415, ensured the family remained favoured by the royal court.

Today, 637 years since it was completed, the remains of the castle and some of the grounds are in the care of English Heritage which undertakes the maintenance of the property and has developed displays and exhibitions telling the history of the castle. It is one of the more isolated properties in the portfolio of English Heritage, but it attracts thousands of people to the site each year. They range from family visits, military history enthusiasts and students of military architecture.

Even with its walls in a ruined state, on approaching the site the castle still has the effect of being impressive. However, despite its age, being in existence during the Wars of the Roses and the turbulent years of the Tudor dynasty, Farleigh Hungerford castle has only ever been directly involved in one war. In 1642, Sir Edward Hungerford broke with tradition, leaving service with the king to take sides with Parliament. He was appointed to command Parliamentarian forces in Wiltshire and on 2 May 1643, with 1300 men captured Wardour Castle. Two months later he took part in the Battle of Roundway Down on 13 July, but otherwise his military career was less than outstanding.

Whilst Sir Edward was absent on campaign, Farleigh Hungerford castle was attacked by his half-brother, Colonel John Hungerford, who captured it without any resistance. A garrison was installed to hold the castle for the king. During 1644 several forays were mounted against the castle, but the Parliamentarian forces never regained the castle. Finally, on 15 September 1645 Sir Edward returned to Farleigh Hungerford, where Colonel Hungerford surrendered without any fighting.

When Sir Edward died in 1648, the castle passed to Anthony Hungerford, another half-brother, whose loyalties also lay with Parliament. On his death in 1657, it was his son, Sir Edward Hungerford, who inherited the castle and his father’s fortune. In 1660, during the restoration of the monarchy, Sir Edward made a generous monetary gift to Charles II. The castle had survived the war intact, but it would not survive the excessive lifestyle of Sir Edward who sold it in 1686 to pay his debts. Over the subsequent centuries the castle changed hands several times and it was allowed to fall into ruin before coming into the care of English Heritage in 1984.

A massive refurbishment programme stabilised the fabric of the castle, which included refurbishment of buildings which today serve to house exhibitions of life and times during the height of the castle’s fortunes. The chapel and crypt show the private side of life within the Hungerford family and how powerful families like this across the country held control over local area. There are two towers, both of which can be accessed to give a superb view across the surrounding area which once formed part of the hunting grounds and estate. They had military applications to allow any approaching force to be seen in advance.

Across the site there are the outlines of foundations of buildings and information boards with a wealth of detail are placed around the site to explain the function of each spot. Here are to be found stories of intrigues, betrayal, attempted murder and actions which would ultimately lead to execution. Much of the fabric remains to satisfy those enthusiasts with an interest in Medieval military architecture and how it evolved. The role the site played during the Wars of the Roses was small, but historians will find Farleigh Hungerford castle has something to add to the understanding of the period. Those with an interest in the English Civil War will discover that events at the castle, whilst rather minor, also adds something to the history of that period, especially in Wiltshire and further afield across the south-west of the country.

Although never involved in great battles, the history of the site is important and because it is not one of the ‘main sites’ to visit, it is a true discovery that looks into part of Britain’s past. Access to the site is seasonal and facilities are limited because of its location. Wheelchair access is limited but manageable around much of the site. For full details of opening times, directions and onsite facilities, visit the English Heritage website and search Farleigh Hungerford Castle at english-heritage.org.uk.