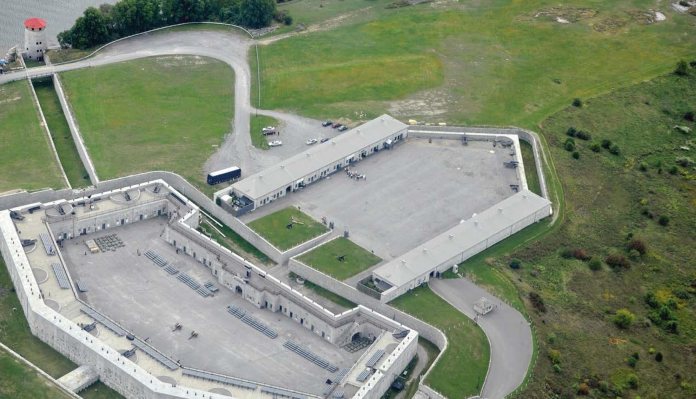 When it comes to thinking about forts in North America, we imagine the wooden log palisade construction because that is what we are used to seeing in Western films. These type of structures existed, indeed still do exist, but there were also stronger forts built using stone. For example, Fort Sumter, built between 1829 and 1860 and known for the part it played in the American Civil War. Along the border between America and Canada, from the late 18th century, a programme of fort building using masonry for defensive purposes was entered.

Today, many of these historical sites are preserved, such as the impressive Fort Henry near Kingston in Ontario. The site where Fort Henry stands had been considered as a military base by the British as early as the 18th century, following the end of the American War of Independence in 1783. However, it was not until 1812 that the British began to develop the site, which included the building of blockhouses to protect the nearby dockyard at Haldimand Cove, today known as Navy Bay.

When war broke out between Britain and America in 1812, Canada, as a British colony, was right on the front line as troops from both sides engaged in skirmishes and sent out patrols at points along the border. In that year, other new defences were built around Fort Henry, designed to be strong enough to protect the nearby Kingston Royal Naval Dockyard at Point Frederick against possible attack by American forces. From its elevated position at Kingston in Ontario, near the mouth of the Cataraqui Rivers which flows into the St Lawrence River, lookouts at Fort Henry were afforded a good vantage point from which to observe the eastern end of Lake Ontario. In November 1812 the artillery batteries were presented with their first targets when they opened fire on approaching American warships. From their height of 100 feet, the guns kept the American ships at bay and protected the dockyard at Kingston Harbour.

The following year construction commenced creating a more permanent defensive position which developed to become the Fort Henry we see today. Within seven years the fort was equipped with stone ramparts and earthworks, along with other defensive features including demi-bastions, redans, ditches and support batteries, turning it into a formidable position. Parts of the original fort were demolished and rebuilt to achieve the design improvements. Work began in 1832 and by 1836 the site was declared capable of defending the Lake Ontario end of the Rideau Canal waterway. Included in the new defences were four gun towers, referred to as Martello towers, but whilst similar, they are not true types of the design.

Built at the same time as Fort Henry were four defensible buildings, known as ‘blockhouses’, designed to protect the Rideau Canal, an important waterway built between 1826 and 1832. One of these, the Merrickville Blockhouse, survives and should be seen in conjunction with Fort Henry to show how Canadian border defences of early 19th century developed. Each of these buildings had a garrison of 50 men to provide musket fire to guard the transport route.

Other defences were built to improve the site, beginning with the construction of the lower fort and advanced battery emplacements completed between 1832 and 1837. This was followed by the Commissariat Stores, built between 1841 and 1843, with the last phase being completed by 1845. The final construction cost of the fort was in the order of £70,000, which is approximately 35 million Canadian dollars today.

The flanking ditches measured 30 feet in depth and 40 feet in width to present formidable obstacles. Should an enemy manage to enter the dry ditch they would have been confronted by concentrated rifle fire delivered from 300 positions. During the years which followed, the strength of the garrison fluctuated and the armament also changed over time. Mostly, however, the guns sited at the fort were of 24-Pounder calibre and there was storage for some 1,250 barrels of powder for the artillery and the garrison’s rifles.

The inventory of artillery at Fort Henry at one point comprised of 27 X 24-Pounders mounted in a style known as ‘en barbette’, which is to say they were sited on a raised position to allow them to fire over a defensive parapet. These guns had a range of 1,200 yards and were supported by nine 32-Pounders mounted in the advanced battery, two Carronades of 18-Pounders, plus each of the additional gun towers had a single 24-Pounder gun mounted. Sections of infantry added to this firepower with their personal weapons.

The fort was used as a prison during the Rebellions of 1837- 1838 where the captured rebels were incarcerated following the failure of the insurrection. One of those held at the fort was the rebel leader Nils Gustov von Schoultz, an officer of Swedish descent, who had been captured along with 150 rebels after a brief firefight in November 1838. They were taken to court in the town of Kingston for trial and sentencing. On being found guilty Schoultz was sentenced to be hanged. He was executed at Fort Henry on 8th December 1838.

The last British troops left Fort Henry in 1870, but the site continued to be garrisoned by Canadian troops until 1891 when the fort was decommissioned. During WW1 it was used as an internment camp to hold enemy aliens, including Germans, Turks and Austrians. In 1936 it was decided to renovate the site and turn it into a museum, being opened for that purpose on 1st August 1938 by the Canadian Prime Minister William Lyon MacKenzie King. During WW2, the fort was once again taken over by the military when it was used as a prison camp to hold German POWs.

Today Fort Henry is a tourist site and is administered by the Parks Canada, operated by the St Lawrence Parks Commission, plus is a designated National Historic Site. Throughout the year it serves as a backdrop to special events, including historical re-enactment displays which focus on the period of 1867. The significance of the date is because that was the year when Canada became a nation in its own right.

Guided tours escort visitors around the site to take in all points of interest, such as the cookhouse, sleeping quarters, flanking ditches, reverse fire chambers and the storerooms. Further information can be discovered about the site by visiting www.forthenry.com