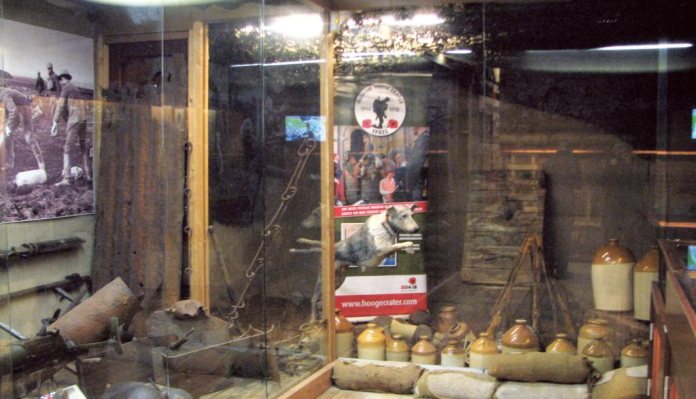 In this modern age of interactive, reality museums, it is refreshing to come across one which still functions in the traditional-style, without all the fancy gimmicks and allows visitors to see the artefacts on display without any distraction. One such exhibition is that displayed as the Hooge Crater Museum, located on the Menin Road, leading away from the small city of Ypres in Belgium, which tells the history of the fighting in the area between 1914 and 1918.

This privately-owned and operated museum can trace its origins back to the 1990s, when the buildings in which it is housed, a former chapel and school dating back to the 1920s, were saved from falling into disrepair by Roger de Smul-Ceuninck, who obtained them for posterity. The original museum, with its display of WWI artefacts, was opened in 1994, which is rather fitting because the area around Hooge was the Front Line and the scene of fierce fighting throughout the First World War.

In 2009, the museum was acquired by its present owner, Niek Benoot-Watteyne, who operates it independently with his charming wife Ilse. Neik is a wellinformed historian and enthusiastic militaria collector and since taking over the museum he has added much to the collection. For example, his most recent acquisition in an original Model T Ford ambulance, as used during the war, and forms a display showing how the wounded were treated by the medical services.

Everything in the museum is original and some of the artefacts are items recovered directly from what was once the battlefield in the surrounding area. The site around the museum has been the location of an extensive battlefield archaeological dig and some of the items recovered are now on display, alongside some rare and unique artefacts. The exhibition is comprehensive and laid out on the ground floor with a lot packed into the collection, which is well-presented in display cabinets.

Whilst not huge, visitors can find themselves spending two or three hours reading the captions and just browsing at leisure the manikins in uniforms, along with the impedimenta of war which surrounds each life-size diorama. You find yourself looking at strange items, some of which may be familiar from books, but not before seen properly. For example, early respirators to protect the troops from gas, pumps to keep the trenches dry and recreated general living conditions of the troops. This is a museum about the men and the things they used in the trenches.

Here too are the medals the men received, including Belgian and British types, along with some German awards. The personal items, such as shaving kit, cutlery and the things sent to the men by their families at home, such as bottles and jars containing ‘treats’ to give them a bit of cheer. No museum would be complete without weapons and there are plenty packed into the display cabinets. Rifles of all the armies show them in comparison, along with examples of the type of ammunition they fired. There are machine guns, hand grenades, bayonets, pistols and even an example of the massive 13.2mm calibre German 1918 T-Gewehr anti-tank rifle.

The photographs lining the walls and cabinets show the men and the conditions in which they lived, fought and died. There are first-hand accounts from both sides, along with letters and diary entries all of which need to be read. Peering into other cabinets reveals strange spiked items known as ‘caltrops’, devices dating back to medieval times, which were scattered along the roads to puncture tyres of vehicles or cripple men and horses if trodden on, which was likely in all the mud. Clubs, knives and bayonets illustrate the brutality of trench raids.

After looking at detail of uniforms and the minutiae of personal items and medals the display of artillery shells and fuses is absorbing. The variety in such a small museum is incredible and illustrates just how artillery came to dominate the battlefield. There are no examples of the actual guns themselves, but the ammunition and the details of how barrages were fired more than makes up for that. A short film, showing the conditions of the battlefield one hundred years ago where the museum now stands underlines the terrible conditions on the Western Front and Ypres Salient in particular.

After the visit, you can relax and enjoy refreshments or a light lunch and drinks in the restaurant, which fronts the museum. Sitting here, visitors are surrounded by an incredible display of shell cases that were decorated by the troops in designs, which have become termed ‘Trench art’. There is a selection of militaria on sale, such as medals, bullets, cap badges and ‘sectionalised’ artillery shells. A television screen shows film of how the Ypres Salient evolved and developed over four years of war.

It doesn’t stop there, because stepping out the front door, the Hooge Crater Cemetery, containing almost 6000 graves, faces you from across the road. Only a few yards to the left from the museum there is a small road and visitors can walk the route following what was once the positions of the German Front Line. Neik will very gladly explain the route, which takes about 45-minutes, and there is a free pamphlet to guide you along the route. It is very much worth it, because it leads to where underground mines were exploded, leaving the craters as a reminder that this was once a battlefield.

There are several museums in and around the area known as the ‘Ypres Salient’, but the Hooge Crater Museum, which is located only a ten-minute drive from the city of Ypres, provides the best place from where to begin exploring the area. For collectors of militaria, enthusiasts of military history or just general visitors exploring the area, it will more than satisfy your curiosity. Full details of opening hours, facilities and other sites in the area, visit the website at: www.hoogecrater.com.