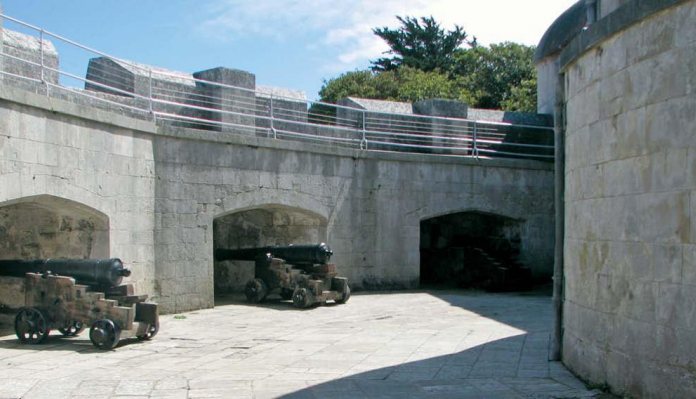 During his reign, King Henry VIII ordered the building of many coastal fortifications as part of his ‘Device’ programme, to defend against a French invasion. Although referred to as ‘Henrician’ castles, these defences are more correctly artillery. Examples include Walmer and Deal in Kent and St Mawes and Pendennis in Cornwall, where they provided defence to Dover and Falmouth harbours respectively. Their presence was a deterrent and such was their construction that, even though they dated from the 16th Century, many of these artillery forts were used during both world wars.

One of the finest examples of this type of fortification is to be found on the Isle of Portland in Dorset, which today is connected to the mainland by the A354 road, which runs through Weymouth. Built of Portland stone, quarried locally on the island, it was one of the costlier sites to be built, costing almost £5000 in its day, the equivalent to five million pounds today.

The site was chosen by Lord Russell, who had been appointed to survey and select the site for the fort’s location in April 1539. The design of the fort was to produce a semi-circular central tower, sometimes referred to as ‘fan-shaped’, with the convex bulge facing seawards. The arrangement for the guns provided a platform protected by thick walls with a lower gallery, known as a casemate, which provided overhead protection. Its size was smaller than either Deal or Walmer, but its importance was no less.

Construction began in 1539 and by December 1540 its development was sufficiently advanced to allow the first troops to be posted there. This comprised four gunners and two others under the command of Captain Thomas. By 1541, it was fully completed and commissioned into service, with a complement of eleven pieces of artillery, gunpowder and cannonballs. The fort was self-contained, with provisions stocked and sleeping accommodation for the gun crews.

Eventually, tensions between England and France eased and the garrison at Portland fort was reduced and finally withdrawn. Over the next 30 years, or so, the defences at the fort became neglected and fell into disrepair. By the 1580s a new threat emerged, this time from Spain and between 1584 and 1585 the sum of £228 (approximately £250,000 today) was spent on repairing the fort. Two years later, the Spanish Armada sailed through the Channel and the fort at Portland, along with other coastal defences, was put on alert. In 1596, it was recorded that there was still a garrison of six gunners and five soldiers at the site, commanded by a captain.

The fort was inspected in 1623 and reported to be once again in a state of disrepair, but it still had 13 pieces of artillery in place. An inventory of the stores recorded 54 muskets, of which only 20 were serviceable. Repairs were undertaken and in 1636 another two guns were added to the armament. On the outbreak of the Civil war in 1642, the fort was seized and held by Parliamentarian forces. In 1644, Royalist forces managed to capture the fort after which it was besieged for almost two years, when Parliamentarian forces recaptured it in 1646. It was garrisoned and in 1653 helped defend Portland against an attack by Dutch forces.

Once more unto the breach!

For the next 150-years, the fort’s fortunes waned until the outbreak of the Napoleonic Wars. In 1805, its defences were repaired and the artillery comprised six 24-Pounder cannons, six 12-Pounder and two 9-Pounder cannons. It was the last time the fort would be armed. For the rest of the 19th Century, it was used for various purposes, including accommodation for service personnel. During WWI, it served as part of the establishment for seaplanes operating against German U-Boats in the Channel. During WWII, it was used as a storage facility in the build-up for D-Day.

Seven-years after the end of the war, the fort was opened for the public to visit. Today, more than 470-years after it was built, Portland Castle is in the care of English Heritage, which is responsible for its maintenance. The site contains various displays and exhibits of artefacts to show visitors a full history of the site, which are illustrated with drawings and paintings of the different periods.

One of these is the layout of the kitchen, showing how the garrison would have been fed. To assist in the understanding of the fort, as well as interpretation boards, visitors can use audio-guides, which describe at various points what it is the visitor is seeing. This is very useful and detailed. Never having been attacked, it is possible to examine the architectural detail and see how the fort evolved with military engineering.

The casemate level for the guns affords an excellent view across the anchorage and with the gun platform above, the artillery from here would have had an unrestricted view to engage enemy ships entering the bay. The fort is compact and impressively strong, with its location placing it perfectly to repel or deter an attacker from coming too close.

In its restoration and maintenance of the site, English Heritage has not forgotten the main purpose of this site, which was to serve as an artillery platform. To that end, they have replaced several cannons of the period to show how they defences must have looked. This makes it a site to be visited by anyone who is interested in artillery or military history in general, because so many periods are encapsulated in this one location.

The layout, with its winding stairs is a tribute to over four centuries of military architecture and although small, it warrants a length of visit of at least two hours, if not a bit longer. Indeed, standing on the ramparts overlooking the bay, it is easy to think of all the history that took place in this spot. The preparations for D-Day with American troops embarking their ships and the landing craft, it would have been an incredible site to witness.

Refreshments are available on site and the shop stocks a range of books along with other bits and pieces for younger visitors. This is truly a hidden gem, and once discovered, is unforgettable. Portland Castle is open between April and the end of October and closed during the winter months. Opening times vary slightly also in October.