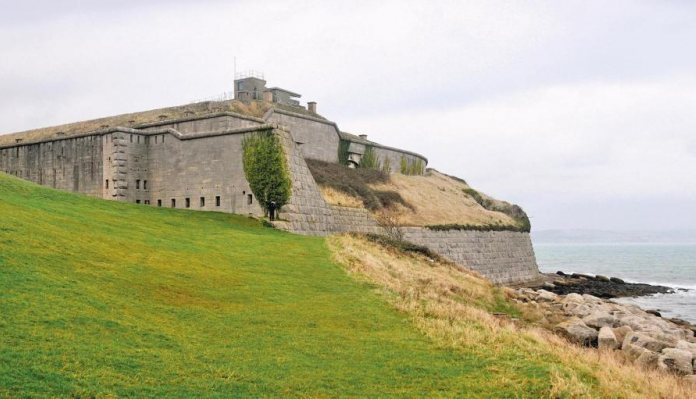 In Britain, you don’t have to look too far to find a historical site. It might be a castle, a battlefield or an estate where some historical figure once resided. The Victorian coastal fortification of Nothe Fort, at Weymouth in Dorset, does not have a particularly long history but during its time as a military base, it experienced many changes and events.

Located at the end of a promontory lying south of the entrance to Weymouth harbour, the fort has unrestricted command of the flow of vessels entering the waterway. Built between 1860 and 1872, when Britain feared an invasion by France under Napoleon III, Nothe Fort has a very low silhouette and the walls have been skilfully constructed to give the impression that they are part of the harbour outer walls. It is not until a vessel enters the channel that the site’s defensive purpose is fully revealed.

Today Nothe Fort is open for the public and from the outside, it does not look large, but on entering the site visitors can see what a superb feat of engineering No 26 Company Royal Engineers achieved almost 160 years ago. The fort is constructed on three levels with the lowest being the magazine for shells and powder. The middle or ground level was where the twelve rifled muzzle-loading guns were positioned in casemates. The upper level on the ramparts of the walls allowed light field guns and infantry to fire in allround defence of the position.

From the very beginning the Royal Artillery made the fort it’s own, with the first garrison including gunners from No2 Battery. These men served as crews for the original artillery complement of two 64-Pounder, four 9” and six 10” guns. These remained in service until 1890 and could have fired on any attack made against the neighbouring Royal Navy facility at Portland. In that year, the armament was changed to 12.5” calibre guns, weighing 38 tons, capable of firing shells weighing 800 lbs out to a range of over three miles.

By WWI, the armament at Nothe Fort had been changed for modern breech-loading types including three 6” guns mounted on the upper level. These could fire armour-piercing shells weighing 100 lbs out to a range of ten miles. However, the guns at the fort did not need to be fired in anger during the war. During WWII the 6” guns were still in place and the fort received Bofors 40mm anti-aircraft (AA) guns and four 3.7”
AA guns were positioned in the area which today is the visitors’ car park.

After the war, the fort remained in use as a storage facility for the Royal Navy until the early 1950s. Various proposals to turn the site into a commercial enterprise never took shape and Nothe Fort fell into disuse and disrepair. A group of volunteers formed to restore the site and between the 1970s and 1980s, its fortunes were saved. The team managed to preserve and refurbish the site we see today. The work is far from over and projects are continuously being worked on.

Nothe Fort has a resident group that presents Victorian period gun firing displays and at other times the site also hosts re-enactment weekends, including 1940s weekends. At other times there is still much to see in the way of exhibits and displays.

Walking through the main gate towards the ticket office, visitors become surrounded by military history. At this level, there is a fascinating model which shows how the fort was constructed and later developments over time. Admittedly, the guns here were never fired in anger at an enemy but that fact does not detract from the importance of the site. It is another example of the defence building programme which is sometimes referred to as ‘Palmerstone’s Follies’ because, in the end, the threat from France faded. Despite not being needed in the 19th century, Nothe Fort and other artillery forts like it, such as Fort Nelson and Coalhouse Fort, were used during both world wars. For this reason, they make perfect repositories where examples of artillery can be displayed with plenty of room.

A good place to begin is on the upper level and work your way down. On this level, there are great views towards Portland and across the expanse of the bay to appreciate the arc of fire covered by the guns from the fort. The guns displayed here are wartime weapons, including Bofors and 3.7” AA guns, plus naval ordnance, also. There are smaller displays such as wartime radio communication and observation.

The ground level is where the heavyweight stuff is exhibited. For example, firing positions for the 64 lbs RML guns have been reconstructed, complete with the loading implements, to look as they would have been in the 19th century. A section of a barrackroom of the period shows how the troops lived on site. This is also where many of the other extralarge items are also displayed, such as torpedoes and wartime searchlights. Some of the rooms have been used to show how a wartime NAAFI canteen looked and shows something of the atmosphere.

From this level, stairs lead down to the underground passages where the magazine storage rooms for the ammunition can be visited. Some of the rooms now house the handiwork of military modellers, mainly a naval theme, all finished to a very high standard. The hoists to move ammunition for the 6” and 12.5” guns can be seen and the powder rooms show the levels of safety required to handle the volatile powder. The surprise at this level is the inclusion of a command centre from the Cold War, complete with an integral blast door. This is a real piece of history from the 1980s and not a recreated set staged for visitors.

Under normal conditions, the fort has a schedule of displays and special weekend events planned, including gun firing, 1940s reenactment groups and much more. From Home Front to Normandy, military architecture and military modelling, this location fulfils all interests, making the site a time capsule covering the past 150 years of British military history. It is a relaxing and absorbing site to visit and time spent on-site varies depending on if an event is being hosted, but even on an ordinary day visit prepare to stay for at least three to four hours.

More information can be found at: www.nothefort.org.uk