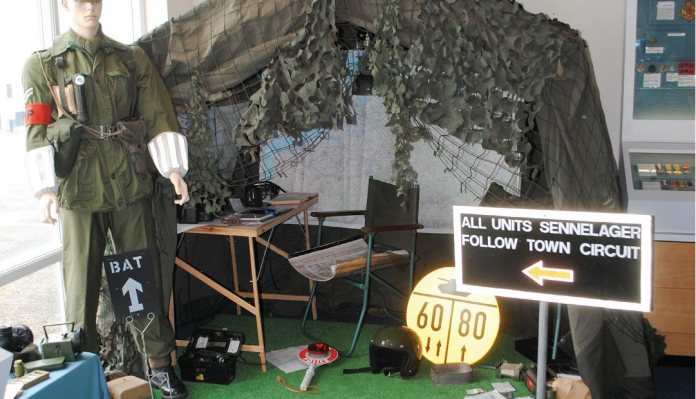 The Military Mounted Police was formed in 1877, followed eight-years later by the Military Foot Police in 1885. In 1926 these two units were amalgamated to form the Corps of Military Police and in 1946 it was designated the Royal Military Police. The regiment served in both world wars and this history can be discovered today in the Museum of Royal Military Police in the grounds of Southwick Park, near Fareham, Hampshire PO17 6EJ. This is also the location of the Defence School of Policing and Guarding, and the RAF and Royal Navy have similar displays in the grounds, also.

I was recently paying a visit to see an event at the village of Southwick and the opportunity to visit the RMP Museum presented itself. I had been to the museum before, but when such offers are made it is nice to accept them. From my previous visit I remembered it as being a well-presented display, with a comprehensive selection of artefacts. It was exactly how I remembered, but with the addition of some extra displays to bring the history up to date. Entrance is free of charge, but because it is located within an operational military camp, arrangements must be made prior to visiting for security purposes.

The museum is set in its own separate building and laid out on a single floor level, which is ideal for access by visitors in wheelchairs. Although formally established in historical terms in the late 19th century, the museum tells the history of military policing going back to the Tudor period. Soldiers follow orders in the main, but there is always a very small element, like any establishment, who transgress and it is those who end up having dealings with military police.

Through a series of exhibits, visitors can learn exactly how far-ranging the role of the Military Police has always been and continues to be in the modern age. One naturally thinks of them as dealing with deserters, but that was only a small part of their role. They also deal with security and movement of traffic during military operations, and handling prisoners of war is a massive part of their duties. The regimental motto is ‘Exemplo Ducemus’ which means ‘By example, shall we lead’. Looking in the Commonwealth War Graves Cemeteries in France, Belgium and Holland one sees example of this in the shape of the regimental cap badge of the Royal Military Police engraved on the headstones.

On the outbreak of WWII, there were just over 4000 members serving with the Military Police. Six-years later this had grown to around 32,000, serving in all theatres of war. Details such as this are highlighted in the museum. There is also the usual line of uniforms, equipment and weapons used by the RMP in their duties and the medal collection is also impressive. This is one of the least understood of all regiments in the army and this museum sets out to correct that. Re-enactors do not have a problem depicting Military Police, and in fact those who do portray the role do so very smartly and with confidence. They very obviously have done their research and they do credit to the men who served in the ranks.

Vehicles used by the Military Police, including motorcycles, are exhibited and a life-size model of a Military Mounted Police greets visitors at the entrance to the museum. All the campaigns and operations are covered, including Northern Ireland. Outside the museum there are some vehicles, including Land Rovers and a Ferret Scout Car, showing how units keep mobile patrols on the move when deployed. As military museums go, this is by no means the largest, but the museum shop stocks a range of items including books and DVDs related to the Military Police and campaigns where they were deployed. For further details and how to arrange a visit either telephone 023 9228 4372 or email museum_ rhqrmp@btconnect.com.

At a recent event I had the pleasure of meeting a group called the Notts and Derby Living History Group, which, for me at least, is a new group. They are well-established and, as their title says, they portray the regiments associated with the area, including the Nottingham Yeomanry and the Sherwood Foresters. The group has a civilian side to depict the Home Front and the military aspect is supported with a good selection of items to present static displays. This includes weapons, kit and equipment. They also have some vehicles available for events and they have attended some very good shows with their displays.

If you think this is the group for you to join, they can be contacted through their website. www.nottsandderby1939- 45lhg.com