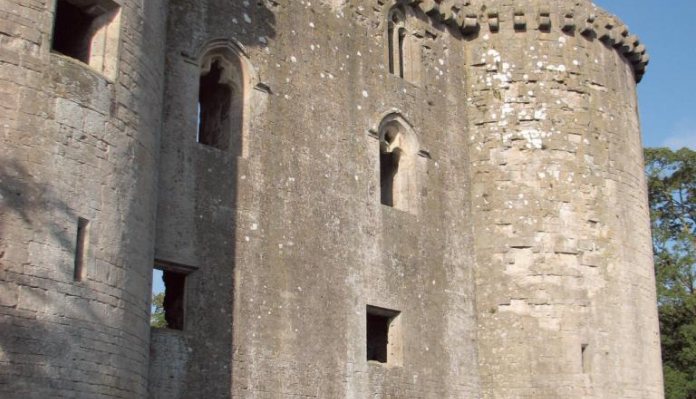 Now that winter is here, the number of events for re-enactors and vehicle owners are very few, except for some privately organised gatherings by groups, which leaves us with time on our hands.

One way of spending this time is to get and about to explore various historical sites, such as castles and battlefields. In this country, there is no lack of either, although some castles do close for the winter. However, it is still possible to find some which are accessible throughout the year, such as Nunney Castle in Somerset. I discovered this little gem a couple of years ago when I was taking a winter walk. I have since been back a few times and thought I would share the experience with you, in the hope it might provide an idea for an unusual trip out.

As we all know, castles are usually to be found strategically sited on high ground, from where the garrison would have commanding views of the surrounding area. The location of Nunney Castle in Somerset, as I discovered, could not be more different. It goes against the notion of dominating the high ground and is actually located on low-lying ground in the quiet village of Nunney, just off the busy main A361 road between Shepton Mallet and Frome.

It dates back to 1373, when it was built by Sir John de la Mere, a local knight who had served in the Hundred Years War, who took as his inspiration for the design the French castles he had seen first-hand whilst on campaign. Today, this hidden gem is in the care of English Heritage and is well worth a trip to examine the architecture of what, on first consideration, appears to be an otherwise minor 14th century site. The castle is open all year with free access but only the ground level is accessible.

The function and structure of Nunney Castle altered over the centuries but it still retained its fundamental style, which was a fortified manor house. It is not a large castle, in terms of defensive building. In fact, the internal measurements are just 60-feet by 24-feet. The walls are deceptively stout for its compact size and measure eight feet thick and rise to 54-feet, with a round tower at each of the four corners. Access today is across a narrow wooden footbridge, which spans the water-filled moat that once formed part of its original defences.

With such a compact design, the castle was more suited to being used mainly as a family residence rather than a military base. Indeed, that was its primary function for almost 300-years. Then, in 1645, it became the focus of attention during the English Civil War, when it was being held for the King by a Royalist garrison under the command of Colonel Prater. In September 1645, Parliamentarian forces, commanded by Sir Thomas Fairfax and Oliver Cromwell, moved to the area.

On the 18th September, several hundred troops from Colonel Rainsborough and Colonel Hammond’s regiments surrounded the castle and laid siege to it. A battery of artillery, including one cannon, which fired a 36-pound shot, was brought from the nearby town of Shepton Mallet and sited on a hill from where the guns could fire onto the castle.

The bombardment opened and concentrated on the walls on the north side. Colonel Prater and his small garrison continued to resist, and in an act of defiance, Prater raised his flag. For two-days the siege continued until, with the walls breached by artillery fire, Prater surrendered on 20th September. The moat had served its purpose, which was to prevent a direct assault but with artillery there was no need to commit troops to assault. On its capture, the castle had been severely damaged, which prevented it being further used during the war. Because of this, it escaped complete destruction and it was never fully ‘slighted’

It’ll Be All Over By Christmas!

Then, on Christmas Day 1910, 265-years after the siege, that part of the battered walls finally gave way and collapsed. Over the years the moat has silted up, but its trace shows how it would have been effective in deterring, if not actually preventing a determined assault. Much of the fabric material has since been removed from the site and today the castle stands like an empty shell. Interpretation boards have been placed to explain the development and role of the castle, including how the kitchens functioned and the standards of the living quarters.

Despite its small size, there is a lot to study from the intact structure, such as the ashlar masonry, windows and the machicolations. Each of the towers would have had spiral stone staircases leading to the upper storeys and it would have been comfortably furnished. The village has a charm all of its own and it is hard to imagine war ever visiting the location, no matter how briefly. The siege, only two months after the Parliamentarian victory at the Battle of Langport on 10th July 1645, was a very minor affair during the Civil War but students of the period will be interested in visiting the site of to see how it developed. The drive to Langport, to see the larger battlefield, takes less than an hour and, putting the two events together, helps build an understanding of how the Civil War affected Somerset.

There is ample parking in the village, a short walk to the castle, which has been voted one of the best in the country and yet it remains unspoilt for all that. Evidence of a Roman settlement has been uncovered near the village and the All Saints Church just across from the castle is worth visiting, also. The village of Nunney has its own Website, which features a range of activities, including walks and the dates on which local clay pigeon shoots are also organised.