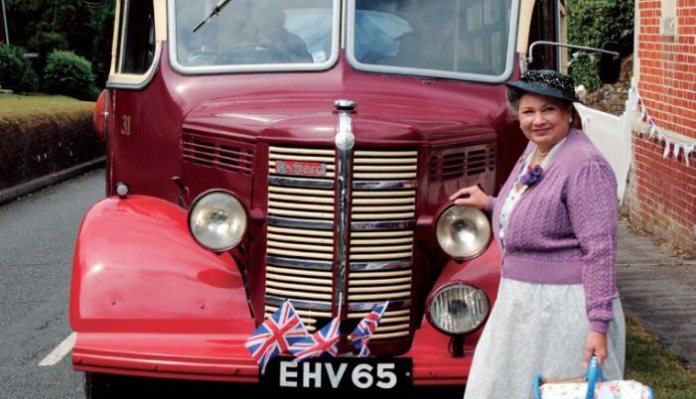 Songs have been written about them and they have been the stars of films and popular television programmes. The celebrities in this case are buses, either single or double-decker types, and over the years they have played an important part in making history. Buses, like steam trains have always been popular, and like them are enjoying something of a revival in interest. This can be gauged from the numbers of vintage models to be seen being driven on the roads today as they make their way either to or from a vintage vehicle show. They may not turn out in large numbers but when they do turn out they attract a lot of attention from all age groups. The young are fascinated that such transport existed and, for those of a certain age, they remember days out to the seaside or perhaps being evacuated away from the dangers of the bombing in 1940.

Buses are public transport taking people to and from work, but in 1914 the British army was so desperately short of vehicles that London buses were requisitioned for use to transport troops to the Western Front in France. In 1939, buses were again in the forefront of war serving on the Home Front throughout WW II. Photographs showing the damage in the ‘Blitzed’ cities such as London, Coventry and Nottingham, often show buses lying at the bottom of craters or tangled up in the bomb-damaged buildings. Bus drivers were killed during the bombing as they continued to operate services throughout the ‘Blackout’.

Throughout the Blitz buses carried people to work and home again and were an emblem of defiance to carry on as normal. Bus garages were destroyed by bombs, such as the Milehouse bus station in Plymouth, and more workers were killed. Some bus companies even raised their own units of Home Guard and even went as far as converting some vehicles for the role. For example, the London Passenger Transport Board Home Guard, made up from managers, drivers, conductors and mechanics, were to be found in many depots. One unit went as far as converting an AEC Regent bus into an armoured vehicle for the unit’s use. It was a monstrous steel box with a ‘pitched’ roof and apertures through which the men could fire their rifles. As with many such ‘inventions’ used by the Home Guard this vehicle, whilst useful, was probably more of a hazard to other road users.

Nevertheless, though, it showed something was being done. London Transport raised several battalions of Home Guard, including one called the ‘Dartford Country Bus Depot Home Guard’ which also used some of its own vehicles for transportation.

Buses still have a popular appeal with specialist magazines catering to the enthusiast and there are clubs and special events organised around the country. For example, at the Imperial War Museum site at Duxford they have hosted the gathering known as ‘Showbus’ which is the largest event of its kind in the world, being dedicated to the restoration and preservation of buses from all periods. Buses come in all shapes, sizes and colours and visitors to sites which feature them, such as the openair museum at Beamish in County Durham, (beamish.org.uk), have fond memories of them. Motor manufacturing companies such as Volvo, Dennis and AEC all produced buses, but the company which is unarguably most famously associated with them is Leyland.

The Historic Dockyard at Chatham in Kent (thedockyard.co.uk) is another location which operates an on-site service using a 1930s bus to carry visitors around the site, which gives a flavour of nostalgia. A similar service is operated at the National Motor Museum at Beaulieu in Hampshire (beaulieu.co.uk), where a replica 1912 open-topped bus on site serving in the same role. This is the kind used to transport the troops to France in 1914. At the Imperial War Museum at Lambeth in London there is one of the real buses which took part in the movement of troops. There are specialist museums where visitors can learn more about buses, such as the Trolleybus Museum at Sandtoft in Doncaster which has a range of vintage buses on display and special events are organised when the vehicles are operational. The Museum also hosts ‘The Gathering’ when vehicles assemble for a grand show. Details of all these events can be found on the website at: sandtoft.org

Buses of all periods are offered for sale and as with any type of vintage vehicle the prices are governed by condition, age and rarity. One enterprising owner of a double decker bus has turned his vehicle into a mobile exhibition centre to become a Home Front museum which is operated by a group called the Home Front Bus (homefrontbus.com). Through their website the group has established a number of links to various other bus-related websites for enthusiasts. The Home Front Bus has been fitted out to provide a wartime experience of civilian life, a shop and upstairs there is the ‘Blitz’ experience with wartime newsreel film telling how the bombing affected life and how public transport had to still provide services.

Vintage buses can be driven on the roads and there are plenty of shows to take part in. Indeed, there are vintage steam train lines, such as the East Somerset Railway and Buckfastleigh in Devon, which organise wartime weekend events and include vintage buses to give rides. Another steam train offering this service is the Gloucestershire and Warwickshire Steam Railway (gwsr.com) near Cheltenham. Buses may not be to everyone’s interest, but there is no denying they can be fascinating because they were a large part of wartime life and remain so today.