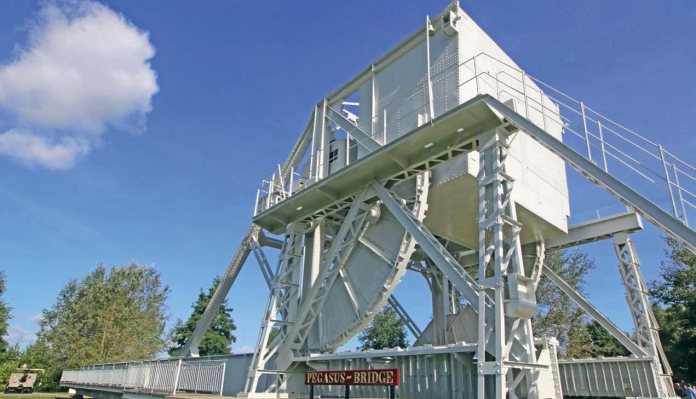 At around 06-30am on the morning of Tuesday, 6th June 1944, just as the first waves of Allied troops were approaching the Normandy coastline in their landing craft, it is doubtful that any of them were aware that airborne troops had already landed on French soil to capture strategic positions more than six hours earlier. To the west the American 82nd and 101st Airborne Divisions parachuted in to seize objectives while some 50 miles to the east the British 6th Airborne Division was undertaking similar operations, which included capturing the two bridges over the Caen Canal and the Orne River at Benouville.

The responsibility to seize these bridges was given to Major John Howard with troops from the 2nd Battalion Oxfordshire & Buckinghamshire (Ox & Bucks) Light Infantry who would land in gliders as part of the 6th Airlanding Brigade. Much has been written about the operation and features large in the 1962 film ‘The Longest Day’ and scene recreates the tension very well. The 6th Division landing, which had three missions to complete, was given the codename ‘Operation Tonga’. The seizing of the bridges was one objective and given the codename ‘Operation Deadstick’. The other two were the destruction of the artillery site at Merville and the bridges around Troan.

For his attack, Major Howard used six gliders, assigning three to each of the bridges, with a total of 180- men from ‘D’ Company and two platoons from ‘B’ Company of the Ox & Bucks along with specialist Royal Engineers to disarm any demolition charge. Howard’s three gliders landed close to the bridge over the Caen Canal shortly after midnight and engaged in a brief but fierce fire-fight which secured it within 15 minutes. The bridge on the Orne River, only a few hundred yards away, was also seized intact and the coded message for success ‘Ham and Jam’ was sent.

The mission was an unequalled feat of arms and the story of which, along with 6th Airborne Division’s other objectives, are told in the superb exhibition housed in the purpose-built Pegasus Museum and Memorial (Website: www.musee.memorial-pegasus. com) just across the road from where Howard landed. Opened in 1990 it tells the bravery and drama in great detail using the fire-hand accounts of the men who took part. It also contains many personal artefacts and an authentic recreation of a fullsized replica Horsa glider of the type used in the operation.

Sadly, the actual bridge from the war was replaced by a modern construction of very similar design, but the original was saved for posterity and is today on display at the museum where visitors can see the scars of war carved into its steel construction during the fighting. Other items on display outside include artillery such as a 17-Pounder anti-tank gun, section of a Bailey bridge, while the outbuildings contain maps, photographs and fascinating information about gliders. An M2 half-track and M45 ‘quad’ .50-inch calibre machine gun mounting is an unusual and very interesting combination.

However, it is inside the museum where the personal histories of individual men of all ranks who took part in the mission, tells how they managed to fight off German attacks and hold the bridge for 12 hours until relieved by British forces. A short information film presentation sets the scene by explaining the operation and why it was so important the bridges be captured. The exhibition looks at events from both the German and British aspect and, just as importantly, the civilians caught up in the war.

Exhibited in the display cases are letters and diary accounts of the men along with their photographs and sometimes their medals, which have been donated to the museum. It’s small when compared to some others in the area, but it is the personal touch which makes it different too. The names of some of the men whose stories are told can be found on the headstones, such as Private Peter Sanderson, killed on 12 June aged 19 years, buried in Ranville. Many more are to be found in cemeteries in Bayeux and Benouville.

All aspects of the operation are featured in the exhibition, including logistics supply, the dogs such as ‘Bing’ who parachuted with the men and the role of carrier pigeons. The weapons used by both sides show the comparisons but, at the same time how they were of similar types, such as rifles, mortars, machine guns and grenades. The equipment differed from standard German army issue to the specialised items used by the airborne troops, including an unusual, collapsible cart used to transport ammunition.

This is one museum where the visitor has to read the captions of the exhibits and take the time to read the personal letters, diary entries and firsthand accounts to get a better and full understanding of the operation. The larger, almost diorama-like, displays of jeeps and radio equipment again demonstrate the range of gear the men had to be trained in using. At the other end of the scale is an example of the small dummies called ‘Ruperts’, which were dropped to distract the Germans. It’s hard to believe such things, which look more like stuffed teddy bears, ever fooled them, but they worked!

The museum is all on ground level, with excellent access for wheelchairs and is a site where all ages will find themselves spending a few hours investigating one of the most successful operations of its type. There is a well-stocked shop, with an extensive range of books ranging from those for younger visitors, to those enthusiasts looking for a fuller history. There are DVDs available and other items of interest including Parachute Regiment cap badges and inert ammunition of the calibres used during the war.

On leaving the museum turn right and walk across the bridge where the Café Gondree is to be seen on the left. This was used as a medical aid centre during the fighting and today is a shrine to the men who fought here, many of whose photographs line the walls inside. It is still a working café and to take refreshment here turns it into an unforgettable experience for any visitor. Driving five minutes away in the other direction towards the small town of Ranville, visitors can pick up the wider story. From here it is possible to continue up to the site of Merville where 9th Battalion fought an astonishing action. This location has its own museum which will be a subject for another time.