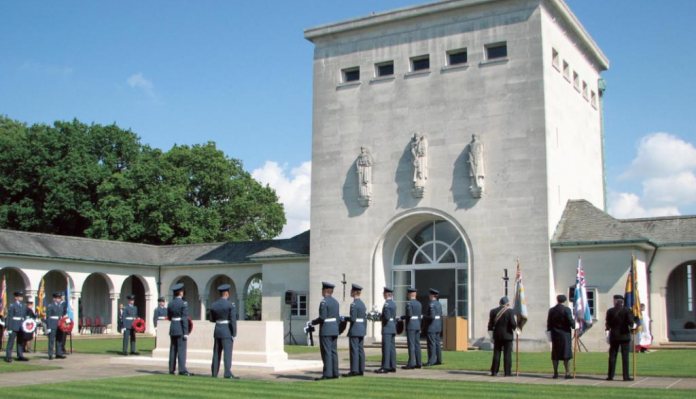 Between 1939 and 1945, the Royal Air Force lost some 116,000 personnel killed, from all branches of the service, including ground crews, in all theatres of war. Most are buried in graves around the world, which relatives can visit. However, for 20,456 men and women, they have no known graves, where their relatives can visit to remember them. On 17 October 1953, Queen Elizabeth II unveiled a memorial to honour those brave men and women, including those from the Commonwealth countries, who were killed whist serving with the RAF and have no known graves.

The names are engraved in a series of panels, which line the walls between small alcove-style recesses, each of which serves like a small memorial within the whole memorial located on Cooper’s Hill at Englefield Green, near Egham in Surrey, about four miles outside of Windsor on the A308. All branches of the RAF are commemorated here, with the list of names commemorated continuing into the post war years. The greatest number of losses was borne by Bomber Command, which alone lost some 50,000 men, followed by Fighter and Coastal Commands, along with the other lesser-recognised Commands including Transport, Flying Training and Maintenance and the ground crews, which also suffered losses.

The ground on which the memorial now stands was given over to the Commonwealth War Graves Commission in October 1949 and it is this body which administers and maintains the site today. The memorial was designed by the prominent architect Sir Edward Maufe, who based it on the style of a triple-arched portico, opening to cloisters which incorporates a tower containing a vaulted room.

Above the entrance to the portico, is the badge of the RAF, featuring an eagle with outspread wings, below which is the motto ‘Per Adua Ad Astra’ (Through Adversity to the Stars) Passing through the doorway and across the inner courtyard, there is the entrance leading up to the tower. Above the doorway, there are three sculptured figures, completed by Vernon Hill, representing ‘Justice, Victory and Courage’.

Along the walls of the cloisters are the panels bearing the names are mounted in order of date. They include 15,462 from across Britain, along with seven who served in the Royal Indian Air Force, 17 from the South African Air Force, 576 and 1397 from the Royal New Zealand Air Force and Royal Australian Air Force respectively and 3050 from the Royal Canadian Air Force. Among these, are nine who served with the Ferry Command, seven with the British Overseas Aircraft Corporation and four from the Air Training Corps. There is a quiet, office-like room where visitors can look for names listed in alphabetical order in the registers and correspond with the numbered panel. This makes it easy to locate a relative to lay a tribute.

Also listed on the memorial are eight members from the Air Transport Auxiliary (ATA) who flew aircraft from the factories where they had been built to deliver them to the operational bases. Women pilots were often engaged in this role and they too were killed whilst undertaking such duties. In total, there are ten members of the Women’s Auxiliary Air Force or WAAF, mentioned on the memorial at Runnymede, including Natalie Conwy Rees-Price who was killed on 12 May 1945. Clarice Sybil Ellis was another who was killed in an air crash on 8 September 1945 and is listed on the memorial.

Each name carries with it much poignant emotion for those who visit the memorial, but probably none more so than those of the four women who served in the with the WAAF, but were members of the Special Operations Executive, who were involved with organising resistance movements in France. To prepare them for their missions, these extraordinary women had been trained in radio communications, weapons handling and even received parachute training. Tragically, they were captured one by one and subjected to inhumane treatment before being summarily executed. Their bodies were disposed of and today they have no-known graves.

One of the women is Noor-un-Nisa Inayat Khan, born in Russia to an Indian father and American mother; she served as an agent with the Special Operations Executive (SOE) sending back vital information from occupied France. She was caught and tortured before being executed at the infamous Dachau concentration camp in September 1944. She was posthumously awarded the George Cross for her work. The other three women who served in the WAAF and later volunteered for duties with the SOE, suffering the same fate as Noor included, and are listed on the memorial and are Lilian Rolfe, Yoland Elsa Maria Unternahrer and Cicely Lefort.

Blue is the colour

The ceilings of the cloisters are painted sky blue and into panels are painted the national symbols of those Commonwealth countries from where the men and women came to serve in the Air Forces, including India, Australia, New Zealand and Canada. This is a place not just for personal reflection to remember a relative, it is also a place to begin research into so much history behind some of the most incredible operations undertaken by the RAF during the war. Operations such as, ‘Chastise’ to destroy the massive dams in 1943 and ‘Operation Jericho’ to attack Amiens prison to release French Resistance fighter in February 1944 and the attacks against the German warship, Tirpitz.

Further details of the Memorial and the commemoration services held at the site, can be found by searching websites on the Internet, usually beginning with the Commonwealth War Graves Commission. Close nearby are to be found the memorials to President John F. Kennedy and the site where King John signed the Magna Carta in 1215, which are both within easy walking distance and together allow one to encompass 800 years of history in one visit.