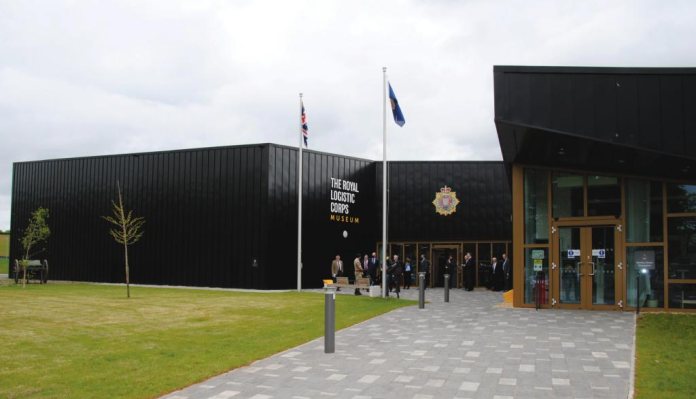 For an army on a campaign to function well, it must be supported by a supply column that will keep it provided with food, fuel, ammunition and all the other essentials that are vital to keeping it combat-ready. This is called logistic support and in today’s British army it is provided by the regiment known as the Royal Logistic Corps (RLC).

In historical terms, the regiment is a relatively recent addition, being founded on 5th April 1993 when five existing regiments, the Army Catering Corps, Royal Corps of Transport, Royal Army Ordnance Corps, Royal Pioneer Corps and the Royal Engineers Postal and Courier Service, were amalgamated. Although only a young regiment, the RLC has already amassed a wealth of combat experience in many operational deployments, such as Iraq, Afghanistan, Bosnia and numerous other operations to provide humanitarian aid. Indeed, during the current COVID pandemic, it was the RLC that moved much of the vaccine to where it was needed.

Each of these operations has come with its own unique set of challenges and the RLC has met each one headon and proven to be up to the task. This is the regiment’s modern history and it is adding to it every day. History from earlier times can be seen in the displays and exhibitions at the purpose-built regimental museum, which opened its doors to the public for the first time on 18th May this year. In 2018, the RLC closed the doors of its regimental museum at Deepcut in Surrey and packed up the exhibits in readiness for moving to its new location at Worthy Down, just off the A34 in Hampshire. As with any military operation, good preparation and forward planning meant a smooth transition to the new museum, which was built in about a year at a cost of some three million pounds. The RLC was involved in all stages, including the two weeks it took to transport the collection, using it as an exercise to gain experience in handling cargo. The doors to the new museum were officially opened on Monday the 17th May 2021, and Gun Mart was invited along to take a look.

The first thing that strikes you, is being a modern building it has been planned for ease of access, with most of the exhibition laid out on the ground floor. A lift has been installed to allow access to the upper gallery, where there is some artwork and a view looking down over the displays below. It has full facilities on-site, which will extend to a shop with a range of books and a well-stocked library for research.

From bicycles to wagons, the history of logistics is told through all manner of artefacts, from Marlborough’s War in the 18th century, through both world wars and up to modern day. Dependency on logistics stretches back even further as visitors are reminded with a display of the Hundred Year War and the English Civil War, before going on to lead through to the rest of the exhibition.

The lighting is subdued to preserve the integrity of the items on display but it is sufficient to see everything in detail, and photography is allowed. The cabinets contain uniforms from all periods, along with weapons and personal items, with first-hand accounts and diaries. A separate medal room containing thousands of items, including five Victoria Crosses associated with the history of the RLC, will satisfy the interests of collectors. In one of the cabinets is the very impressive collection of service medals awarded to Colonel Lucy Giles, who at one time commanded 47 Air Despatch Squadron RLC, balancing out the history between male and female service personnel.

The museum is not large when set against the likes of the Tank Museum or the Royal Signal Corps Museum at Blandford, but it has enough to interest all ages during a family visit. For the younger visitors, there are plenty of interactive, touch-screen displays with activities. For older visitors, there are two screens showing film presentations and information boards, full of fascinating facts on things such as the Chinese Labour Corps during WWI. The displays themselves have been carefully selected to present a well-balanced history of the RLC and that of the regiments it incorporated when it was formed in 1993. Visitors will find a second wander around the exhibition reveals some bits which they overlooked the first time around, such as the story of the explosive device developed by Captain Finch, which killed the German pilot Rudolf von Eschwege in WWI.

Weapons enthusiasts will enjoy seeing a cross-section of historical firearms and some of the improvised weapons used during trench raids in WWI. The museum holds a unique collection of horse-drawn General Service wagons, Horse Ambulance and Water Cart, which will be displayed during special event days in the future. Other vehicles include a Humber ‘Pig’ complete with a remote-controlled vehicle called a ‘Wheelbarrow’, which was used for bomb disposal during the ‘troubles’ in Northern Ireland. The field kitchen display shows how army cooks prepare food for the soldiers on operational deployment and reminds visitors that an army marches on its stomach.

Well worth a visit

Like other military museums, visitors will make what they will of the exhibition. An average length for a visit would perhaps be around two hours, while others may find much to keep their attention and remain for three hours. This is the part of the army that goes largely unknown, but without the RLC those forces deployed on peacekeeping operations with vehicles would not be able to function.

At the time of writing the museum is open, but due to the COVID situation, changes may be implemented. To avoid disappointment it is best to check the website for details (www. royallogisticcorps.co.uk/museum). The museum is planning some events for later in the year and more facilities will open as COVID restrictions are relaxed.

This is an excellent museum and one which will certainly grow a following as well as gain a reputation as a place to visit for research purposes or just as an interesting day out.