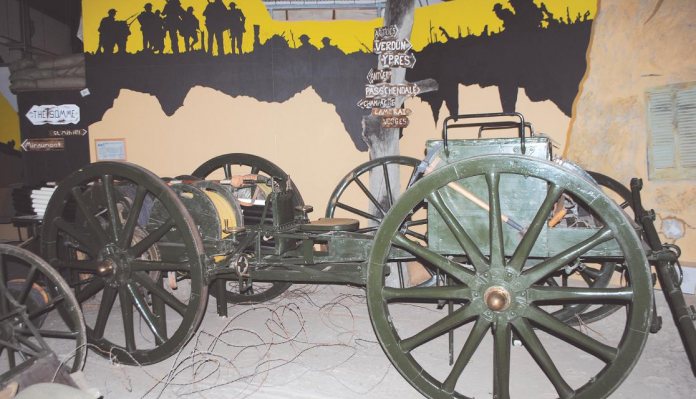 Communications have always been vital for any army to operate effectively and efficiently. More than 2000 years ago armies, used flags and trumpets to signal on the battlefield. Today, modern technology gives instant means of communicating at all levels. I discovered just how far things have come when I recently visited the Royal Signals Museum at Blandford in Dorset.

In historical terms, The Royal Corps of Signals is a relatively new regiment in the British Army, being formed in 1920 to provide communications for the army. Prior to its formation, military signalling had been the responsibility of the Corps of Royal Engineers. The First World War showed how vital it was, more than ever before, that a separate and highly specialised unit be tasked with providing signals, and as the regiment approaches its 100th anniversary this role has never been more important. Deployments to Afghanistan and Iraq and the many humanitarian duties undertaken emphasise reliable and secure signals.

The museum is inside the military camp at Blandford and in order to visit it visitors must register at the guardroom for the sake of security. This only takes a few minutes and can be seen as part of the experience. Parking is inside the camp perimeter by the museum. There is an entrance fee but it is worth it for the upkeep of, and to give access to, such a fascinating and invaluable resource for research into hundreds of years covering the history of military signalling.

The museum is purpose built and contains artefacts not only used by the Royal Signals, but also items from the many campaigns in which its members have served. On entering the display, there is an informative introduction, outlining the early history of military communication. The exhibition here recaps events, such as the Napoleonic Wars and Crimean War, which produced a revolution in signalling with the introduction of the electric telegraph. Prior to the introduction of electronic signalling, communications were labour intensive, being directly operated by troops using mirrors, flags or shutter systems. Morse code broke that and long messages could be transmitted over thousands of miles in minutes, along a series of wires. All of this history is explained through informative and fascinating displays, with photographs and examples of the methods used. The displays then take the visitor through the other campaigns where signals were vital for the operation, including the Zulu War of 1879 and the Boer War of 1899-1902.

Whilst great strides had been made, it was the First World War, which really brought signals and codes into greater significance. The gallery covering the period of 1914-1918 includes the only known example of a cable laying wagon from that period. This is where the hard facts and figures make an impression on the visitor.

For example, in 1914 there were just 6000 signallers in the Royal Engineers and four years later this had risen to 70,000. The miles of cable laid for signalling is also staggering. Indeed, it was the work of the signallers which led to the creation of an independent and dedicated Royal Corps of Signals.

The inter-war years display contains many interesting aspects and explains how Major Ralph Bagnold, an officer with the RCS, was instrumental in creating the Long Range Desert Group, which became legendary during the war in North Africa. The period between the wars shows how horses were still widely used and the introduction of the sun compass aided navigation and provided transportation. The British army was serving around the world in countries which were part of the Empire and allowed signallers to gain valuable experience in communications.

The Second World War provided greater roles for the RCS, as they trained Special Operations Executive agents in the use of radio equipment. Signallers served in every theatre of operations of the war. Exhibits show all the equipment used and the campaigns in which the signallers served. The 2013 film The Railway Man, based on the wartime experiences of Eric Lomax, a Lieutenant with the RCS, based on his book of the same title, is significant because many of Lomax’s personal possessions are exhibited in the museum. The interactive display also allows visitors to follow the story of many SOE agents, such as Violette Szabo and Noor Inaya Khan, and learn their fate, many of which were sadly tragic.

The small sits comfortably alongside the large in this section, with radios and specialist vehicles for carrying the equipment, complete with life-size manikins for scale. The major operations are all encapsulated in this part of the exhibition, including Dunkirk, D-Day, Arnhem and the use of pigeons is amazing to discover. In the First World War the British army used over 20,000 of these birds for sending messages. Obviously no display would be complete without the involvement of Bletchley Park codebreaking and so it is here.

Into the post-war era known as the ‘Cold War’ and rather than being scaled down, military communications and signals were more important than ever before. The men in the RCS were still serving around the globe, even with the end of Empire, as campaigns in locations such as Malaya, Korea, Aden, India, Kenya and many more. In 1945 there were 150,000 signallers in the British army, or nearly the equivalent to some ten divisions.

As the size of the army scaled down, the level of technology increased and looking at the display cases it is possible to see this transition. The evolution from analogue to digital and ‘burst’ transmission is explained and for clearer understanding there are interactive displays for visitors to try hands-on. There is something for all interests here in this comprehensive museum. Collectors will be interested in the large medal display, weapons enthusiasts will find the weaponry absorbing and vehicle buffs will be held by the motorcycles, trucks and other vehicles.

The Royal Signals Museum is spacious, well laid out and far from being the stuffy place full of dull displays. It is informative, interesting and engaging, just as a museum should be for the 21st century. Men and women of the RCS have served in every campaign and operation since its formation as an independent regiment, including the Falklands in 1982, Afghanistan and Iraq. Their presence is not always readily noticed, unlike the frontline fighting soldier, but their function is every bit just as important to the success of the deployment. The number of signallers involved in these operations will impress, such as the fact that around 530 were deployed on each rotation of Operation Herrick in Afghanistan.

The history of the RCS continues and part of that history involves the Queen’s Gurkha Signals, and their chapter is included at the museum. The museum has a well-stocked shop with books and films on the RCS and refreshments are available. Full access for wheelchair users is available. As regimental or military museums go, this one gets my vote for ‘must see’. For full list of opening hours, location and contact details visit the website at: www.royalsignalsmuseum. co.uk/visit-us. Trust me, you will not be disappointed.