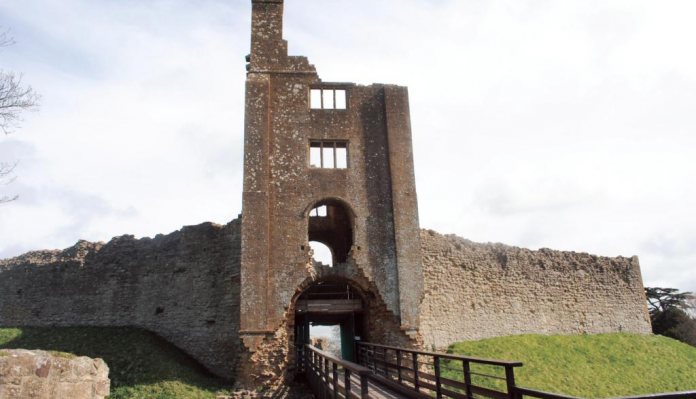 When Queen Elizabeth of England presented Sir Walter Raleigh with the estate of Sherborne Castle in 1592, the once-impressive fortification in Dorset was already in decay and a shadow of its former glory. The site on which the castle stands affords a commanding view to the north and west and when a moat dug to the south and east, later allowed to flood, it became a formidable position. The castle dated back to the early the 12th Century, and whilst it retained some of its defences, such as the gatehouses, it had been allowed to fall into disrepair, during which time it had served as a prison. The queen’s gift rendered Raleigh the latest in a long line of owners and very grateful for such a generous gift, he decided against spending any money to restore the castle’s defences.

Fifty years later in 1642, the English Civil War had broken out and the Royalist army and the Parliamentarian army manoeuvred to take possession of strategic positions.

One of those locations was Sherborne Castle, by now owned by Lord Digby a leading adviser to King Charles. In August, William Seymour, 2nd Marquess of Hertford, together with Sir Ralph Hopton, arrived with 400 mounted troops and 400 soldiers on foot, to take up the garrison of the castle. On 2 September, William Russell arrived to lay siege to the castle and opened a bombardment. The Royalist forces put up a staunch defence of the nearby town of Sherborne, with the result that after four days of fighting Russell withdrew his troops.

As they left, a force of about half the garrison, led by Hopton, followed in their wake. The two sides clashed in an otherwise minor skirmish just outside Yeovil, with Russell emerging victorious. The remnants of Hopton’s force retraced its route back to Sherborne Castle, now followed by the Parliamentarian force reinforced with three additional guns. Back in position outside the castle Russell resumed the bombardment and the outer wall was breeched. Terms of surrender were agreed on and the Royal garrison allowed to march from the castle.

The siege was a short but fierce and bloody affair, lasting 16 days. This time things were much different, with the very capable Sir Thomas Fairfax in command. He was determined to reduce the castle once and for all and ordered up the siege train of artillery from Portsmouth to pound the walls of the castle. The heavy guns arrived at the site on 11 August and took up position. When the castle was built in the 12th Century gunpowder artillery did not exist and the and the stout walls were enough protection for the time. Four hundred years later the walls offered the garrison protection against musket fire, but they could not withstand a pounding by artillery. Mining under the foundations further weakened the walls.

The artillery bombardment continued for four days and the commander of the castle garrison, Sir Lewis Dyves (sometimes written as Dives) knew that it would be impossible to continue to defend the castle. At around 2am in the morning of 15 August he sent a drummer with a message to parley with Sir Thomas Fairfax saying how he was prepared to surrender if given honorable terms. He became angry at the suggestion, probably knowing full well it was only a question of time before the garrison had to surrender without discussing terms.

Sir Thomas sent his reply with his own drummer to convey his reply to Sir Lewis in the castle. The drummer bearing the message would have been aware of the strong position his commanding officer was in and currently winning the battle, which may have caused him to become over-confident in his manner, so that when he came to deliver Sir Thomas’ message the drummer’s attitude was taken to be disrespectful. Sir Lewis became angry at such rudeness and was on the point of ordering the drummer to be hanged. However, he knew the man was under the protection of the terms of parley and he released the man unharmed to convey the agreement to terms of surrender. The garrison of Sherborne Castle surrendered later that day and Anne Finch, Countess of Winchilsea (1661-1720) later wrote of the affair in one of her poems: “Trail all your pikes, dispirit every drum, March in long procession from afar ye silent, ye dejected men of war! Be still the hautboys, let the flute be dumb.”

Once again in possession of such a troublesome place, the Parliamentarians decided to prevent its further use and destroyed the castle’s main defences and buildings in and act known as ‘slighting’. Today, the dramatic ruins of Sherborn ‘Old’ Castle are in the care of English Heritage which is responsible for its maintenance and is open to visit by the public during seasonal months of the year. It should not be confused with the nearby ‘New’ Sherborne Castle which was built by Sir Walter Raleigh as a residence and, as such, is a separate site. A visit to study the development of military architecture is recommended because it shows the evolution from the pre-gunpowder age to the time when it took artillery to defeat the defences.

The site also allows visitors to see how a castle became a family residency and was forced by war to become a garrison. For those interested in the English Civil War, a visit to the site puts it into perspective in understanding how the war in the West Country was fought. The castle lies about half a mile east of the town of Sherborne, just off the B3145, Castleton Road, with the postal code of DT9 3SA, for those using SatNav. Parking is limited and the site has wheelchair access. Because of seasonal opening times, it is best to check on times of opening by visiting the website at: english-heritage. org.uk/visit/places/sherborne-old-castle.