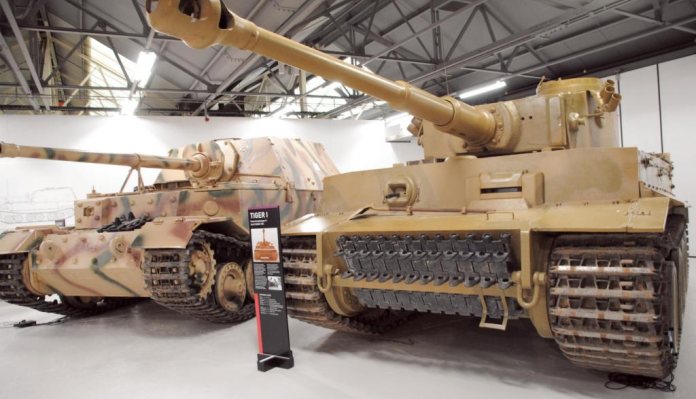 The Tank Museum at Bovington in Dorset is world-famous for its unique collection of tanks and armoured vehicles, which spans one hundred years. Historians, modelmakers and enthusiasts come from all over the world to see the tanks, some of which are extremely rare. It is not a museum which stands still and new exhibits are being created to keep the display fresh.

The latest exhibition, called The Tiger Tank Collection, was opened to the public on Thursday 6th April and I was invited along to have a preview look. Present at the opening were two former crew members who served in Tiger tanks during the war and two British veterans who came up against the mighty machines. The exhibition is due to last for two years and is bound to attract interest from all quarters.

In creating the unique display, the Tank Museum received support from the United States Army Heritage Center, which has loaned the Elefant heavy tank destroyer for the duration. The exhibition has brought together four variants which came from the Tiger tank programme. First, there is the Tank Museum’s Tiger, which is the only operational type in the world. Next there are the 68-ton Tiger II and the 74-ton Jagdtiger, both from the Museum’s collection. The vehicles are displayed in a hall all to themselves. Here they can be seen in all their grandeur and visitors can walk around each vehicle, to examine them in close detail.

Whilst the vehicles are the focal point of the exhibition, on the day the exhibition was opened, it was the veterans who were the true stars and it was a privilege to meet them. Wilhelm Fischer joined the army in 1941, aged 17-years, being posted to serve with the 7th Panzer Division. He was taught to drive tanks using the Panzer II, Panzer III and Panzer IV. He later trained as a driver on the Tiger I. He served in Russia on the Eastern Front and survived having six vehicles being ‘knocked out. Waldemar Pliska also joined the German army aged 17-years and was posted to the 7th Panzer Division, also. He told me that initially he was supposed to go to North Africa and was issued all the tropical kit. However, there was a change and he was sent to Russia, where he served in the Ukraine.

The British veterans included Ernest Slarks, who served with the 23 Hussars and landed in Normandy on D-Day +8 (14th June) and encountered Tiger tanks in Normandy. Ken Tout served with C Squadron 1st Northamptonshire Yeomanry, the same unit in which the late Joe Ekins served, who is credited with destroying Michael Wittmann’s Tiger tank. It was a remarkable experience seeing these men together and who were enjoying one another’s company and sharing stories.

The exhibition tells the whole history of the development of the Tiger and the variants which sprung from the main design, including the 67-ton ‘Sturmtiger’, which fired a rocket-propelled 380mm projectile. Only 18 operational vehicles were built and today three survive. The Tank Museum has a barrel which launched the rockets and this is on display in the exhibition, to demonstrate how variants were developed. On the walls are information charts and first-hand accounts from veterans, including Waldemar Pliska, and the Allies who came up against the Tiger in battle.

There is a large display cabinet with artefacts and types of ammunition fired by the Tiger tank. Technical drawings, photographs and specifications make this an exhibition which must be visited. The vehicles on display still bear their battle scares and reading the events leading up to the capture of these vehicles is fascinating. Whether a modelmaker, war gamer, military enthusiast or just plain curious, do not miss this exhibition. Full details can be found on the website, including Tankfest where the Tiger makes an appearance, at www.tankmuseum.org.

With its corps badge motto of ‘Ubique’, meaning everywhere, the Corps of the Royal Engineers since it was founded in 1716 quite literally served right across the globe, from Australia to South Africa. In the opinions of some regiments in the British army, those who serve in the Corps of Royals Engineers are either: ‘Mad, married or Methodist’. However, one thing is certain all those regiments are glad to have such highly trained specialist troops serving with them and on whom they can depend. Engineers have always been vital to armies throughout history and the Corps of Royal Engineers continue this proud tradition.

The creation of the first unit of the Corps of Royal Engineers dates to a Royal Warrant issued by King George I in 1716. There were 28 Engineers in this initial formation but over the years its establishment grew and by 1787 it was designated with its present title. During the Napoleonic Wars, the REs constructed the Lines of Torres Vedras to defend Portugal against French invasion. It is ironic that when Napoleon Bonaparte died on St. Helena in 1821, it was two men from the Royal Sappers and Miners who built the vault in which the Emperor was interred. In 1856, the Royal Sappers and Miners became part of the Corps of Royal Engineers. Since then, it has served in every conflict in which the British army has fought, including both World Wars, Falklands, Iraq and Afghanistan.

These fascinating facts and many more, which have added to the regiment’s history, can be discovered by visiting the recently re-opened Royal Engineers Museum, located at Gillingham in Kent. Housed in a splendid building, the vast display of artefacts range from buttons and badges to specialist vehicles used by the regiment. There have been many famous members of the regiment, such as General Gordon, Lord Kitchener and, of course, Lieutenant John Chard, each of whose service is recorded in the exhibition halls. The Royal Engineers served in the Crimean War 1854 to 1856, from which conflict the Victoria Cross was instituted. It is fitting that since that time 26 men from the regiment have been awarded this highest honour in the British army. The histories of these awards are recorded and the medal room has a fine collection, including three George Crosses and many other gallantry awards.

Without doubt, though, the most famous recipient of the VC was Lt. Chard, who was awarded the medal for his part in defence of Rorke’s Drift in January 1879 during the Zulu War. In fact, the Royal Engineers Museum is proud of its fine display of artefacts showing the Zulu Campaign, including Lt. Chard’s service revolver, a Webley .45-inch calibre Royal Irish Constabulary Model. Among the more unusual weapons on display is the Brennan Torpedo, an early example of a guided anti-ship missile, which must be seen to be believed. The display cabinets literally burst with fascinating artefacts, such as the Duke of Wellington’s map of the Battle of Waterloo and the story of ‘Snob the Dog’. Alongside all this exciting material are displays of uniforms and personal weaponry and displays of both World Wars.

The library of the Corps was started in 1813 and today contains thousands of volumes, photographs, manuscripts, personal documents and maps, all of which are housed in the museum and are available to view for research purposes on request. The museum hosts special events with demonstrations, including model shows. Full details of facilities, opening times and events can be found by visiting the website at: www.re-museum.co.uk.