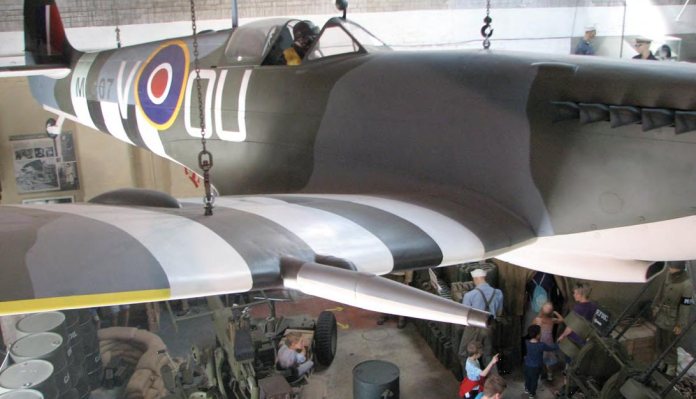 So many museums nowadays do not encourage visitors to touch exhibits on display, apart from the high-tech interactive computers, due to public liability and responsibility in case of accidents. It was refreshing, therefore, to come across the recently opened Castletown D-Day Centre on Portland in Dorset. Here, they positively encourage visitors to touch objects and get involved. This attitude means that there is no need for computer gimmickry and visitors can get on with enjoying themselves.

I first heard of the D-Day Centre in 2016, but it was only just recently that I have been able to fit in a visit around my schedule. My only regret is that I had not visited sooner, because it is a fascinating exhibition. Not large, by any means, and tucked slightly away on the quayside in a building once used by the Admiralty, the Centre is a great experience, which can be enjoyed at all levels.

The port of Weymouth and the harbour facilities at Castletown on Portland were just two of the locations in the area used by America as embarkation points for the D-Day landings at Normandy. It is fitting, therefore, that in tribute to this event, the D-Day Centre be created where the historical event it is commemorating actually happened in 1944. Whether widely read on the subject, and visited the landing beaches in Normandy, or completely unwise to the history, visitors will find this a fascinating place.

Outside the entrance is a Sherman M4A4, of the type used during the Normandy campaign, along with a Dodge WC52 ‘Weapons Carrier’ positioned to resemble a vehicle service point. On the wall is a large interpretation board, giving all the salient points and dates relating to D-Day. Visitors can sit in the Dodge and, with some supervision, they can also climb into the Sherman to gain experience of the vehicle’s interior. That is just for starters, there is more to come inside the main exhibition.

The display is laid out in ‘open plan’ reflecting the fact that this was once used as a warehouse and the hardware on display is a treat for military enthusiasts. This is not your ordinary, run-of-the-mill military museum, but very much a ‘hands on’ experience. The exhibition focuses on the American aspect, which is only right because, after all, this was their embarkation point. There are some British aspects, to reflect the role of the Royal Navy in supporting the operation. For example, one of the exhibits tells the story of Able Seaman Diver Thomas Pike.

Downstairs, the display is laid out with a Harley Davidson motorcycle, Dodge WC54 ambulance and scenes to represent the handling of logistics to support the invasion force. Weapons, uniforms and equipment and information boards tell the story of the operation, whilst overhead, suspended from the roof beams, is a full-size replica of a Mk IX Spitfire in D-Day identification markings. For weapon enthusiasts, there is a Bofors 40mm anti-aircraft gun and an M45 ‘Maxson’ mounting with quadruple .50-inch calibre machine guns, all of which can be accessed and visitors allowed to take seats where the crew would have sat when firing. In a canvas tent, a film presentation plays recordings of interviews of veterans and civilians to show an overall view of events from the time.

This is an exhibition which can be viewed at leisure, peering into display cases, reading the captions and sitting in the vehicles completes the immersion experience. The upper floor puts visitors level with the suspended Spitfire, allowing great photographs from all angles. From the gallery, visitors can look down on the displays to see them from a different angle. At this level, is another Jeep with machine gun mounted for more interaction. Rifles and other weapons are displayed and visitors can pick these up and handle them. They are attached by chains to hard points, but this still allows the weapons to be handled comfortably. There are more personal stories at this level, such as Lieutenant Harold Thomas of the 1st Medical Battalion serving with the 1st Infantry Division, landing on Omaha Beach.

From here it is possible to look out of the window over the harbour, to see the two gigantic ‘Phoenix’ caissons, which were to be used as part of the Mulberry Harbours to support the landings. A life-size mannequin in German uniform shows what type of troops awaited the Americans as they waded ashore in France. Photographs support the displays and the captions provide the right level of information without being long-winded.

As with all museums, the amount of time spent on site looking at the exhibits depends on the individual. Some people will spend longer than others, whilst some visitors will only have a cursory glance. The D-Day Centre is not huge and what it has on display I found enough to interest me for about an hour and a half. But then, I have been all over the Normandy battlegrounds and landing beaches. I would suggest that the duration of an average visit last about two hours to allow captions to be read and displays to be viewed.

Personally, I found it to be a fascinating exhibition, which said everything a visitor would want to know about D-Day. It does focus on the American side of things, but this is not a criticism; after all, it was from here that that troops of 5th US Corps and 1st Infantry Division departed to land on Omaha Beach. I have been to many museums which try to tell the story of D-Day and this is one of the finest I have been to. The reason for this, I think, is because it has the old-fashioned approach of allowing the visitor to discover things for themselves, rather than it all be presented on a computer screen.

I can recommend a visit after which I also suggest a drive out to explore something of the rest of the military history of Portland. As a family experience, you will not be disappointed. The D-Day centre is open seven days a week and for full hours of opening times and news of the exhibition visit the website at: www.castletownddaycentre.com.