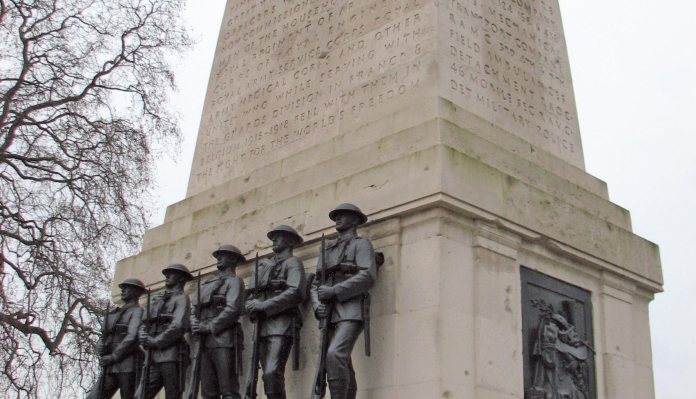 Long before either the Parachute regiment or the Special Air Service were raised, the British army had elite regiments, which could be relied on to steady the ranks in any crisis and remain steadfast in the face of any adversity. The most famous of these were the five regiments of Foot Guards, raised at different times, but all imbued with the same martial spirit, which earned them a reputation as being tough, no nonsense soldiers with an unrivalled quality for endurance and stern discipline.

First came the regiment that would become the Coldstream Guards, formed in 1650 during the English Civil War. However, because it was raised by a Parliamentarian officer, General George Monck, the regiment would find itself placed second after the First or Royal Regiment of Foot Guards in the order of seniority following the Restoration of the king in 1660. The First or Royal Foot Guards were formed in 1656, but it was not until after the Battle of Waterloo in June 1815, where the regiment fought with distinction and the title of Grenadier Guards was conferred on the regiment. The Scots Guards were raised in 1660, with the Irish Guards being formed in 1900 in recognition of service during the Boer War. The Welsh Guards were formed in 1915, with Welsh volunteers coming from other regiments, but they very rapidly joined their sister regiments and gained a reputation as fearless soldiers.

These five regiments together share a single museum at the Guards Museum at Wellington Barracks in Birdcage Walk, London. Despite having so much history between the regiments, the museum is far from being cluttered and the exhibits are well displayed to show a wealth of history, stretching back over 350 years. The Guards have served in campaigns all over the world and their presence has averted disasters and prevented some from becoming worse than they did. For example, the part played by the Guards in the withdrawal from Dunkirk in 1940 is but one instance of their typical fighting spirit.

Collectively, the five Guards regiments have accrued dozens of battle honours, such as Inkerman and Mons, and between them some of the most noteworthy recipients of the Victoria Cross have served in their ranks. The most recent Victoria Cross was a posthumous award made to Lance Corporal James Ashworth of the Grenadier Guards for his actions in Afghanistan in June 2012.

The Guards are most often recognised by their bearskin caps, which they wear on ceremonial duties. Yet, in all their history, the only time this distinctive headdress was worn in battle by the Grenadier, Coldstream and Scots Guards was during the Crimean War. Today, the bearskin is reserved for ceremonial duties, such as the Queen’s Birthday Parade, known more familiarly as Trooping the Colour. Visitors to the museum discover that this is but one of their roles. First and foremost, the Guards are infantry and as such they have served in many conflicts.

Each regiment has its own history, due to the different dates they were formed, but they do serve together on operational deployment. The Guards are probably best known for sentry duties outside Buckingham Palace and St. James’s Palace, but the regiments are first and foremost fighting infantry regiments. The Grenadier, Coldstream and Scots Guards were in France in 1914 as part of the British Expeditionary Force. More recently, they have been deployed around the world to locations such as Iraq and Afghanistan. The Scots and Welsh Guards served in the Falkland Islands in 1982, an action which added another battle honour to their credit.

In the quiet atmosphere of the Guards Museum, among the display cases visitors can discover more about these remarkable regiments, which have such a complicated role in today’s modern army. There are unusual aspects to be discovered, such as the Coldstream Guards goose mascot and the origin to regimental nicknames. Not widely known is the fact that the Guards had at one time their own Armoured Division, which served most notably during ‘Operation Market Garden’. There was also an Independent Parachute Company, which served in Cyprus and during the Suez Crisis. In 1966, a Guards’ Squadron was formed for the Special Air Service. Guardsmen also served with the Long Range Desert Group in North Africa in the Second World War. All this, and much more is waiting to be discovered.

After a visit to the museum, visitors come away with a much different opinion of the Guards. The museum shop stocks a full range of titles, DVDs and much more including models. There is full wheelchair access and for full details of opening times and new exhibitions visit the website at: www.theguardsmuseum.com.