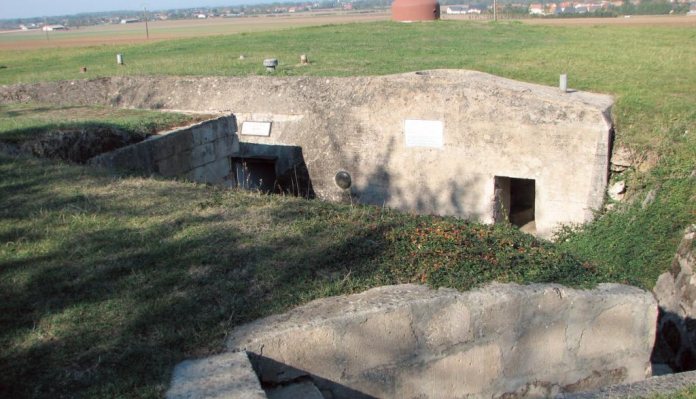 The stretch of Normandy coastline assaulted by the Allies on the 6th of June 1944 extends for over 50-miles and divided into five beach-head landing areas, designated to the attacking forces. The German army not only built hundreds of fortified positions along the coast, designed to curtail any attempt to land in force, they also built bunkers and defensive positions in depth. The positions on the coast are well known and heavily visited, yet just a few miles inland the less well-known are just as fascinating. Some have been wellpreserved and refurbished to show visitors what they looked like 75-years ago.

One such position is to be found just 2.5-miles inland, just south of the small town of Colleville-Montgomery, just off the D60a road heading towards the city of Caen. Building began in 1942 and would contain 18 bunkers to provide mutual fire support; the site was known to the Germans as Widerstandsnest 17 (WN17). The British code-named it ‘Hillman’ and designated it as a target to be attacked by the infantry Suffolk Regiment, which landed on Gold Beach.

The Hillman site served to direct artillery fire from other positions in the area, namely those code-named ‘Morris’ and ‘Daimler. It was commanded by Colonel Ludwig Krug with a garrison of 150 men with an armament comprising of machine guns. The attack on the site was a classic infantry assault, supported by tanks from the Staffordshire Yeomanry and the 13/18 Royal Hussars. One of the defining moments came when Private ‘Titch’ Hunter attacked a machine gun position singlehanded, winning the DCM in the process. The Suffolks consolidated the position but the greatest surprise of all came on the morning of the 7th of June, when Colonel Krug emerged from one of the bunkers with the surviving members of his garrison and surrendered.

Now, 75-years later, the site is a museum dedicated to the Suffolk Regiment and operated by local volunteers as ‘The Friends of the Suffolk Regiment’. The site is open at certain times during the year and it is possible to go underground to enter the HQ and communications centre of the site. Since it was first opened to the public in 1990, Hillman has been renovated by the team of volunteers and their hard work has restored the site to how it was in 1944.

Visitors can walk into the bunkers to enter the world of the Germans defenders, to see the fighting in Normandy from their point of view. The volunteers have replaced furniture using tables and chairs from local houses as the Germans would have done. Bunkbeds have been restored, to show how the garrison would have slept and the displays also show how they prepared food and coffee. Other items, such as typewriters, lighting and various sundries, have also been returned to create a museum into which visitors can walk.

This is a site which looks as though it has been trapped in time. There are no inter-active or virtual-reality displays. This is stepping back to 1944, with all the atmosphere of the time. Indeed, the presentation gives visitors the impression that the garrison will walk in at any moment. Weapons are in their storage racks and uniforms are hung up and, with personal items placed in a random way, the history of the site is reinforced. The types of weapons used by the Allies are also displayed here, along with items of kit and other equipment.

This sub-terranean world, some 13-feet underground, is well illuminated and visitors can wander between rooms in their own time, taking the opportunity to look at things in detail. For example, the generator room and the air-filter rooms, which have been restored to show how they would have operated. It is possible to stand at the base of the shaft and look up into the interior of the cupola, which once housed a machine gun. This is not the original cupola attacked by Titch Hunter but is a replacement of the type which was here in 1944. What made him undertake such an action, without being ordered to do so, can only be imagined. However, it was his bravery, which undoubtedly contributed to the site being captured.

As well as looking at the military importance of the site, it is the military architecture which built it that must also be considered. It is one of the finest preserved and restored command network bunkers to be found anywhere in Normandy. Its location, being off the main routes, means it is a true ‘hidden gem’, unlike any of the over-commercialised sites closer to the coast. From its vantage point on the elevated feature known as ‘Periers Ridge’, from where it would have given a panoramic view of the Allies as they advanced across the landscape, it is possible to understand the importance of Hillman and why it was essential it be captured or destroyed.

The photographs and information captions around the site provide details of the attack against the location and the fighting which led to its capture. Looking at the maps of area, it is possible to see the width which the defences extended here in Normandy. However, it is only by visiting Hillman that visitors can see the depth to which the defences were constructed and understand how these formidable defences provided overlapping and mutual fire-support between positions.

To appreciate the site, a visit lasting a duration of 1.5-hours minimum is suggested. However, to truly appreciate it and look at everything, it is down to the individual as to how long they remain on site, but it will be a lot longer. There is limited car parking space and for those less physically able will find access something of a difficulty. This is not a museum, so do not expect a souvenir shop selling items. What visitors will take away, though, are memories of a unique experience. Further details of the site such as opening times, and a map of the location, can be found on the website at: amis-du-suffolk-rgt.com