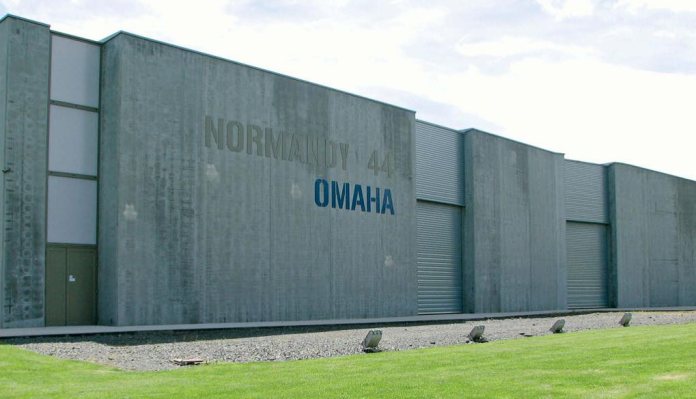 The D-Day landing beaches along the Normandy coastline in France, which together formed ‘Operation Overlord’, are unarguably among the most famous battlegrounds in the world and which have since been visited by countless millions of people. To help in their understanding of what happened on that fateful day on 6th June 1944, and the subsequent weeks, many museums have been established along the stretch of coastline.

Each one sets out to explain the fighting, either as a set-piece action, such as the attack against Merville Battery, or as a complete history of the campaign. The size of the museums varies from small to large and, equally, the standard of displays also varies in quality. One of the best and most recently-opened is the ‘Overlord Museum’, located on the main D514 coastal road just opposite the American Military Cemetery at Colleville in the Omaha Beach sector.

This museum is the legacy of Michel Leloup, who sadly died in 2011, before he could see the completion of his idea to house his unique collection in one purpose-built centre. Michel Leloup was a young boy during the war and grew up in a country under German occupation, witnessing first-hand the battles fought around his home in Falaise. As an adult, he became interested in collecting artefacts from the war and he amassed items which included German and Allied vehicles, weapons and equipment. His collection grew so big that in 2008 he decided to relocate it to a dedicated museum close to the landing beaches.

Work began on the new premises with 1400-square-feet of display space, continuing apace so that five years later it was opened to the public. Since that day in 2013, the museum has become one of the leading sites, telling the complete story of the Normandy Campaign. It attracts visitors from around the world and welcomes veterans of the campaign, conveying on them the status of true heroes.

In the grounds, immediately outside the main museum building, there are several vehicles on display, including an example of an M4A1 Sherman tank, Sexton self-propelled gun and an M-10 tank destroyer, along with other exhibits such as a section of ‘Bailey Bridge. On entering the museum, visitors are confronted with a collection which was amassed by one man and, in that respect, is unrivalled.

This is a museum about the ‘hardware’ of war, with over 35 vehicles including a German ‘Panther’ tank, Kettenkrad, American half-tracks, amphibious truck called a DUKW (known as a ‘DUCK’), Harley Davidson motorcycles, a landing craft and Jeeps and trucks. Some show their battle scars from the fighting. For example, the front of the Panther is pockmarked by shot across its glacis plate, none of which penetrated. Some of the items will be familiar, but this is still a remarkable collection to visit, and there are some unusual items on display.

Moving through one display area to another, the exhibits have been laid out to present a diorama, which tells part of the story of events in June 1944. The DUKW, for example, is loaded with boxes of stores and behind, on the wall, is a large photograph showing how things were on D-Day. The landing craft has its ramp lowered and two medical orderlies are carrying a wounded man on a stretcher. Elsewhere, there are examples of the obstacles which were once part of the beach defences and are now being used to create displays. Life-size mannequins wearing American uniforms have been posed among these items, to show what must have happened.

Unfortunately, the quality of these mannequins is not terrific, but ignore that one, simple point and concentrate, instead, on the weapons, equipment and uniform. Their size puts things into perspective and is better than just looking at items laid flat in a glass-fronted display case. A set of mannequins in the uniform of the 1st Infantry Division (The Big Red One) with personal weapons are posed among the beach obstacles, to show the landing on Omaha Beach. An interesting pose shows a man lying on his back firing a rifle grenade from his M1 Garand rifle and another shows kit being carried. Together they show a good representation of events during the landing.

The displays are laid out to allow visitors the best possible views of the exhibits from all angles. All aspects of the operation are covered; from getting the logistic supplies ashore, to the individual fighting man. Photographs and information boards provide additional information and it is easy to spend two hours or longer wandering around looking at everything. Personal items of kit from the German and Allied armies are fascinating to compare and it is incredible to see how much alike they really are.

This is a museum to visit at leisure and take your time to look at everything and it is worth it. The large exhibits, such as the German PaK40 7.5cm anti-tank gun, can be examined in close detail and the smaller items of personal kit are also deserving of attention. From weapons enthusiasts to collectors of militaria, or just plain-interested visitors, this museum has something for everyone. If you have never visited the Normandy Beaches before, this is a great place to start your experience.

There is ample parking and the museum shop is well-stocked with books in a range of multi-language titles, along with models and DVD films, as well as the other usual paraphernalia, such as T-shirts, mugs and caps. The staff also speak English, so there is no language barrier. For full details of opening times and location, visit the website at: www.overlordmuseum.com.