The Trench of Death 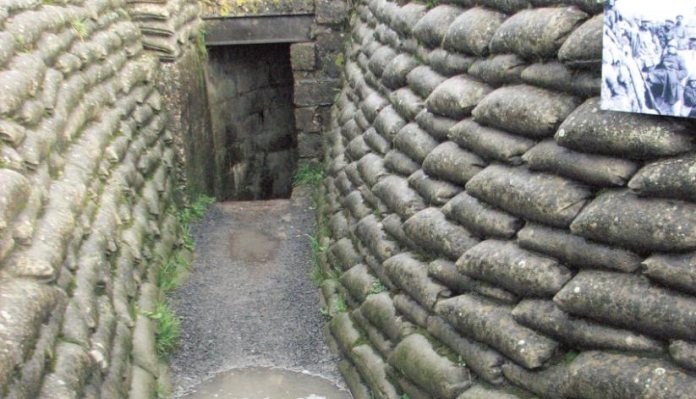 As the winter of 1914 set in, the Allied and German armies facing one another along the frontiers of Belgium and France began to ‘dig in’, creating a series of defensive trenches, to provide cover from bullets and shells. The trenches became deeper and longer, extending almost 500 miles from the Belgian coast in the north, to reach the Swiss border in the south and referred to as the Western Front.

Mostly, it was held by the French and British armies, with the tiny contingent of the Belgian army holding onto an area around the Yser canal in the north. Before the war, the Belgian army had numbered barely 130,000 men, but after suffering severe losses and most of the country under German occupation, it was reduced to about 70,000 men. To hold their stretch of the Front Line, the Belgians flooded the area to their front and dug in. That was the only way that they could prevent the Germans from advancing and it was a tactic which worked.

Today, one hundred years after the end of WWI, stretches of these trenches have been preserved for visitors to see. One of the finest examples of these preserved earthworks is that created by the Belgian army as it held positions along the Yser Canal and is known as the ‘Dodengang’ in the Dutch language. In English, it is known as the more sinister-sounding ‘Trench of Death’, and forms part of a museum recording events which unfolded here and around the nearby town of Dixmude between 1914 and 1918.

The actual Trench of Death itself follows the original line of wartime defences, which incorporated the Yser Canal to the front as additional defences, extending for 300 yards, to give an impression of what life was like here for the Belgian soldiers. The sides of the earthworks have been recreated using concrete sandbags to show how the trench was constructed and walking into the site is to step back in time. It is a low-lying, often wind-swept site, which, in winter, along with the damp from the canal, is fiercely cold.

The wartime role of the Belgian army is often overlooked in favour of the larger French and British armies which undertook the great offensives. Here, in the north, the Belgian army held on stubbornly to protect the left flank from being out-manoeuvred by the Germans. With more than 90% of the country under German occupation, recruits to replace losses were in short supply, but what forces they had held on tenaciously. Concrete observation posts and shelters were constructed, all of which have been preserved and can be entered as part of the visit to the site.

There are information boards at points along the site, which detail the purpose of each position and how it would have functioned during the war. Explanations of the troops and the fighting here is also detailed on these boards. It is a fascinating experience to be able to get inside these positions and gives visitors a real sense of the past, without being shot at! Standing in the observation posts, it is possible to look out across the Yser Canal towards where the German front line once was. Whilst no great attacks took place here, as happened at Messines in June 1917, the location was no less important to hold and no less dangerous.

The troops holding this stretch of line would have constantly been on the alert for any German movement to try and force a crossing of the canal. Walking through the maze of lines form the Trench of Death is like jumping into the deep end of a swimming pool, you become completely immersed and you get an understanding of what it must have been like to be a Belgian soldier serving here in the front line.

Entrance to the site is through an interpretation centre, which was opened in August 2014, in time for the centenary to mark the start of WWI. The exhibition contains a series of display cabinets, which show weapons and uniforms of both the Belgian and German armies, along with other items of kit and equipment. Interactive video displays provide additional information and photographs, to show what the surrounding area looked like at the height of the war. This section is best viewed before continuing to the trench, because the captions provide important information.

Once the gallery and the exhibition has been viewed visitors step into a viewing area, which gives an uninterrupted view along the trench system. It is important that the floor covering be looked at in detail, because it is a massive aerial wartime photograph showing the positions and how the Belgian defences were constructed. The site is thoroughly absorbing and unlike any other preserved stretch of front line trenches a visitor may have been to.

At the entrance, books and other items are on sale, which link in with the site. If you have never given much thought to the part Belgium’s army played in WWI, a visit to this site will make you change your mind and instil a respect for this small country and what it did to help protect itself. The Trench of Death is open every day between April and September, but only weekends outside this time. Full details of opening times and location are on the website, which can be found at: bezoekdiksmuide.be/dodengang.