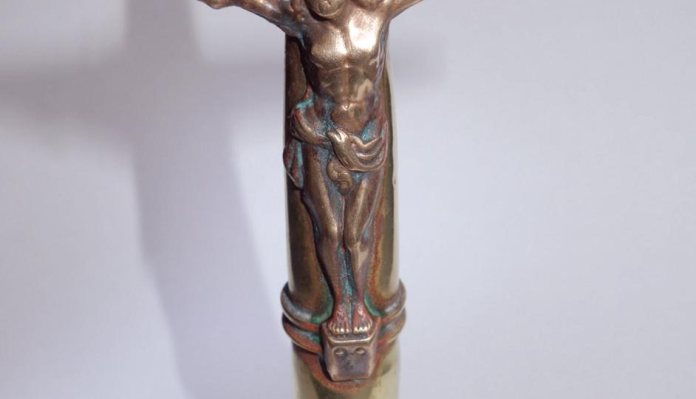 The British sculptor Norman Stillman once said that war was “Long periods of boredom, punctuated by moments of terror” but he was referring to the Second World War; I can quite believe that during the First World War, the periods of terror lasted a lot longer than a few moments. Soldiers were in fear of their lives almost constantly; if you managed to dodge the machineguns, mortars and mustard gas on the battlefield, you were being bombarded by artillery day and night! To take their minds off the horrors of war, many soldiers took to crafting useful objects out of the detritus of war, some made intricate models from packing crates and wooden ammunition boxes, others made cigarette lighters from empty cartridge cases. Other items were made after the war by the local population to sell to people who came to visit the battlefields and cemeteries. I was given a couple of letter openers many years ago, made from empty rifle cartridge cases and scrap brass, and it sparked an interest in these items and I’ve picked up a few more here and there.

The first item in my collection was made from a German 7.92mm X 57mmm cartridge case and bullet, as fired from the Mauser Gewehr 98. The scimitar-shaped blade (which is common to a lot of Trench Art letter openers) is inscribed 1914-1918 and ‘souvenir from Peronne’ on one side and Pr. W Carrol 3rd Leicester Reg. on the other. Peronne was near where the Battle of the Somme took place, so Private Carrol may have been working on this item to take his mind off the impending battle, or during a lull in the fighting, not that there was a great deal of ‘downtime’ I’m sure! Writing this article has re-kindled my interest in Private Carrol, so I will probably do some research and find out more about him.

The second item is also made from a 7.92mm case and bullet but this time the case is copper plated steel with grooves along the sides of the cases and bullets. Steel cases were quite common, as they were cheaper to produce but any buried rusted away, unlike brass cases. One side has souvenir, the other ‘Phalempin’ which is in Northern France, near Lille.

The most intriguing letter opener I have is made from a .303 round but has the blade made from a piece of alloy of some sort, not the usual brass; I was given it by someone whose uncle had been in the Royal Navy in World War One. On one side it says ‘Souvenir De Salonique and on the other is ‘Balkans’ and ‘LZ85, 5.5.16’. This all seemed very specific and a quick internet search led me to the fascinating story of a German Zeppelin, the LZ85. The 200-metre long, four engined Zeppelin had carried out a raid on Vandar during the Salonica campaign but had come under fire by ground based, 12 pounder anti-aircraft guns, as well as HMS Agamemnon. The ship claimed victory when LZ85 was brought down and the 12-man crew were captured by Serbian troops in nearby marshes. Souvenir hunters soon descended on the wreck and it would appear that the letter opener I have was made from part of the superstructure!

Another item in my collection is a miniature coal scuttle made from a cut down 1 pounder or 37mm case. These rounds were fired from ‘Pom Pom’ guns and were used by most countries, in one form or another, during the conflict. The workmanship is actually quite good and the handle is made from thick copper wire with a wooden handle. The ‘shovel’ part is actually a 7.92mm case with a copper handle fitted to the end.

As I mentioned earlier, many examples of ‘Trench Art’ were actually made after the conflict, as souvenirs to be bought by visitors to various significant places. I have a brass case in my collection that looks like a flare gun cartridge but is much longer (Four-inches instead of 2¾-inches) heavily embossed with Vlamertynghe and souvenir. Vlamertynghe is in Belgium and there is a large military cemetery in the town and it’s quite close to Ypres. There are 1175 Commonwealth graves, so maybe a grieving relative bought it whilst visiting the grave of a fallen soldier. I’ve not been able to identify the case and it has been suggested that it may have been used to start an aircraft of some sort – if any readers recognise it, I’d really appreciate an email.

I’m not religious but the crucifix made from two 8mm Lebel cases caught my eye; it’s similar to ones I’ve seen online, so may be another item made after the war. No matter when it was made, it’s still an interesting way to re-use something in a ‘swords to ploughshares’ way.

Shell cases are often seen made into flower vases and I’ve seen some huge examples in the past. I’ve got a six-pounder case that I bought recently and it was made in December 1915 at the Kings Norton factory in Birmingham and filled at their factory in Abbey Wood in North Kent. It was one of the National Filling Factories set up to finish the production of ammunition. I bought the case/vase from, along with various other items, Chris Hawkins Antiques in Hastings, Sussex. This means that, once I’d brought it home, this particular item started life 5 miles from my house, travelled to France and returned 100-years later via East Sussex!

Collecting militaria in all its forms is a fascinating hobby, some of it with very interesting stories attached and I’ll be on the lookout for more item of Trench Art on my travels.