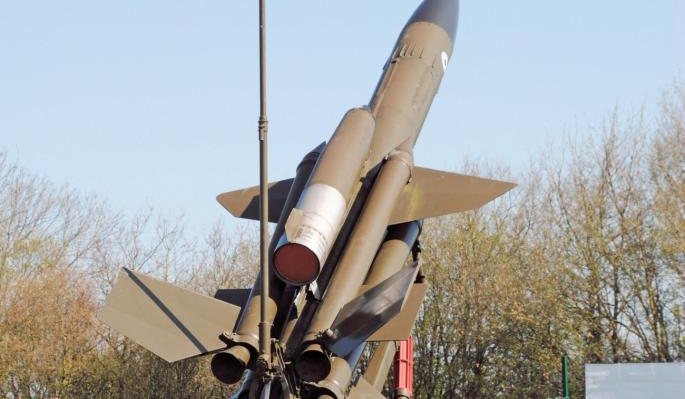 The site on which the Helicopter Museum at Weston-super-Mare in Somerset now stands was an operational airfield during the war, being used to train pilots and test experimental weapons. It was also the site of an aircraft factory producing the Bristol Beaufighter, a highly-successful multirole strike aircraft, with almost 6000 being built. It was rather fitting, therefore, that over the 8th - 9th of April it opened its doors for a weekend’s event of history. The site has previously hosted wartime weekends, but this event had a twist to it, with a couple of groups very cleverly linking it in with some of the displays inside the museum.

The Helicopter Museum has almost 100 aircraft on display in its collection, which span the history of the helicopter from its inception to present day. The idea of helicopters was already being explored at the outbreak of war and the Germans produced the Flettner Fl282 ‘Kolibri’ (Hummingbird) which flew between 1942 and 1945. After the war, helicopters were further developed and eventually used in warfare. The French army used helicopters in Algeria, but it was the Vietnam War which showed how important helicopters were in war and this would only increase in future conflicts. This aspect is emphasised in the museum. Today, helicopters are vital to armies for a wide range of operational duties, including airlifting wounded men to hospital.

I had been to the museum before, but this event was new to me and walking on-site I was looking forward to seeing what the organisers had produced. I must admit to being very surprised at what had been accomplished in terms of scale and diversity. The amount of space is very limited, but the groups used what they had available to put on a series of very interesting static displays. Together with the line-up of military vehicles, they covered a lot of history from WWI to the Vietnam War. This timeline only became apparent when I got on site proper.

One of the first groups I spoke to were depicting the 12th Devons, which were an airborne unit during WWII and took part in the landings in Normandy during the night 5th - 6th June 1944. It was the first time this group had attended the event and they were putting together the final touches of their display when I spoke to them. They explained how as members of the Living History Association they also depict the 2nd Devons, which were infantry. It is great to see local groups depicting local regiments to remind people of the role such units took on in the war.

Static displays feature collections of weapons, uniforms and kit put together by members of groups and I have often compared these to outdoor museum exhibitions. At the Helicopter Museum, this is exactly what it felt like, as I wandered from one display to another, passing between British and American equipment, German and Soviet Red Army. It was like visiting several specialist museums, one after the other. There were Home Front Displays featuring civilian life and the Home Guard showing how these units were raised across the country. The role of the ARP Wardens was demonstrated by a couple of reenactors, who had put together the type of kit used in their wartime duties and stacked it on a handcart for mobility. This was just the right size for the site and it worked very well. It looked authentic and, being mobile, allowed wider interaction between the re-enactors and visitors.

Attending the event for the first time was a group depicting the 2nd Battalion Lancashire Fusiliers, which was famous for winning six Victoria Crosses ‘…before breakfast…’ during the Gallipoli Campaign in 1915. Based in Bristol, the group was only formed in January this year and already has several members. Robin Armstrong of the group explained to me that they are all interested in WWI and hope to grow the group. They put on a display of interesting items from their collection, including weapons, tents and personal equipment. The uniforms they were wearing were reproduction, purchased from Soldier of Fortune (www.sofmilitary. co.uk) and use deactivated rifles for static displays. The group can be contacted by emailing [email protected]

As well as the static re-enactment displays, there were trade stands for collectors and displays of collections relating to the war years, such as Tony Salter the ‘1940s Living Historian’ who was exhibiting items associated with the Home Guard Auxiliaries. These would have been the resistance movement in the event of a German invasion. The display was fascinating and included examples of devices they would have used to destroy bridges and vehicles. Weapons such as Sten guns, knives and other improvised items showed an aspect of ‘What could have been’, which is largely unknown or forgotten about.

All the groups had made good use of the space available and between them produced a marvellous ‘big little event’, rather like condensed history. That sounds like a contradiction in terms, but that is exactly what it was. The atmosphere was friendly and relaxed, which allowed everybody time to wander around and chat to members of groups. Kevin Drake, who depicts the Home Guard at Westonsuper- Mare, which looks out on the Bristol Channel, had a small display that is always very good and people enjoy looking at these. I spent time with Kevin and joined him for an authentic cup of tea, made in the style of the Home Guard. I also met up with Stuart Beeney from the group ‘Rolling Thunder’, which depicts the Vietnam War.

Rolling Thunder had put on a small, rather informal, display with members wearing equipment to show how foot patrols were conducted in the jungles of Vietnam. The presence of the group also provided a direct historical link with the displays in the museum, because Huey helicopters were used to transport troops, such as these, to areas of operations. The group had a vehicle on site, along with some items of kit and weapons, and erected tents to give a snapshot look at the war. This was a much-reduced display, compared to what they normally do, but nevertheless it attracted a lot of interest.

There were around 20 various vehicles on site, including a DUKW, trucks and German motorcycles. However, it was a Willys Jeep, built in 1945, which had been painted in the regimental colours of the Guards Armoured Brigade that attracted my attention. The owner was wearing Grenadier Guards cap badge and, this being my old regiment, I just had to discover more to this story. The Jeep was dedicated to his late father, William Coles, who had served in the King’s Company of the 1st Battalion Grenadier Guards and had fought during the Dunkirk Campaign in 1940. In 1944, Sergeant William Coles returned to France and served in the Normandy Campaign, where he lost an arm during the fighting in August 1944. This was, indeed, a fitting tribute.

Several ‘strollers’ were walking around as individual historical depictions. As ever, these attract attention and make good photo-opportunities. One of these strollers was dressed as a helicopter pilot, complete with body armour and helmet, which was most appropriate given our location. The depiction linked in with the Helicopter Museum, as did the ‘Cold War’ Soviet Army display. There was no room for mobile displays, other than the odd foot patrol by groups, and the vehicles did not move either. Even so, with all these displays and the museum exhibition, also, there was plenty to see. Inside, among the exhibits, there were more trade stands and displays connected to various other interests. This made it the type of venue where it is possible to roam around and find bits which had been overlooked.

Throughout the day, the re-enactors on their displays were continuously engaged in conversation as they answered questions and explained things in more detail than is possible at the larger events, where they are much busier. The permanent outdoor exhibits of the museum include a Bloodhound antiaircraft missile, which looks very impressive. Looking across the perimeter area, it is possible to see various wartime buildings, including the concrete pillboxes, which were built to protect the site. This is a site which is still developing and growing. It hosts a series of events throughout the year and full details of these and other news, including opening times and directions to the site, can be found on the website at www.helicoptermuseum.co.uk.

There is potential for this event to grow and develop. It already has everything much bigger shows have, but it retains the informal charm of the smaller events. This puts it between the two and judging from the numbers of visitors on site, this is a popular event. For anyone thinking about joining a re-enactment group this is the event to visit, to gain some understanding of the hobby. It is the ideal place to have a chat in relaxed atmosphere and pick up some tips and suggestions as to what group suits your interests. For enthusiasts in military equipment and weapons, this event also works well, because there is time to dwell on looking at things and talking to people. I seriously recommend that this venue be put into your diary dates.