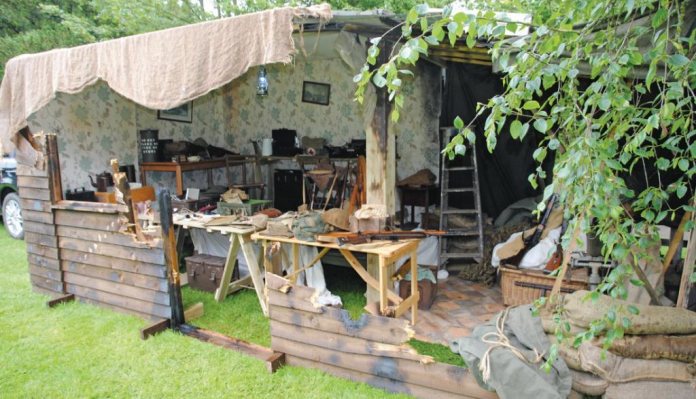 At the time of writing it has been 18 months since the outbreak of COVID-19, which developed into a pandemic leading to governments around the world imposing ‘lockdowns’ in their countries to try and defeat the virus. We all know what it has meant to everyone, but now, with vaccines and following regulations, we are at the stage where things are beginning to return to normality. The move is slow but it has begun and looks set, fingers crossed, to continue.

Museums and theatres are reopening, people are on the move and organisers of militaria fairs, vehicle shows and reenactment events are releasing dates.

All this good news is a great relief to everyone and we can now make plans to visit places. We knew it would come to an end and news of planned events is appearing on social media sites. From the small local events to the larger shows, things continue to look good. For example, the Imperial War Museum (IWM) has announced that its sites, which includes Duxford, The Cabinet War Rooms and HMS Belfast, are open to the public. The site at Duxford in Cambridgeshire has already hosted a Flying Day event in July, with reduced numbers and limited facilities to minimise risk.

The Duxford website (www.iwm.org. uk/airshows) announced the news that the Battle of Britain Air Show, scheduled for 18th-19th September, is pending, but other dates for Flying Days in August are confirmed. However, to avoid disappointment, keep watching the website for any changes. All IWM sites advise booking tickets in advance online to help the staff on-site at events. It’s all understandable and to have something to look forward to is, at least, better than nothing.

The Tank Museum at Bovington in Dorset is also open and announcing a full schedule of events continuing right to the end of the year and even looking ahead into 2022. Check out their website (www.tankmuseum.org). Like other locations, visitor numbers will be reduced, so book your tickets online for Tankfest, 17th-20th September.

If the situation continues to improve, then as the saying goes, the show will go on. This will include a model show from 4th-5th September, a militaria fair and auction on the 6th November and even a Christmas Fair 27th-28th November. There really is something for everybody going on at the Tank Museum, which is more great news.

The Cobbaton Combat Collection at Chittlehampton at Umberleigh in North Devon has announced that it is open for business 6 days a week, Sunday to Friday, with visiting hours between 10 am and 4 pm. For more info visit www.cobbatoncombat.co.uk.

When enthusiasts move around and start visiting locations they will, no doubt, notice a lot of changes. Some will be obvious, but it will all be for the best and keep interest alive. New museums have opened, such as the Royal Logistic Corps Museum near Winchester, as mentioned last month, which is well worth a visit. New exhibitions and displays will have been created and groups that put on gun firing displays at sites such as Nothe Fort in Weymouth and Fort Nelson, near Portsmouth, will return all refreshed and ready to do their stuff.

Military vehicle shows are also starting again, such as the one-day event held on 27th June at Haselbury Mill, Somerset. The site where this annual local show is hosted is very small, but they manage to pack a lot into the site, which includes militaria traders. The number of vehicles on site was limited due to restrictions but after arriving and parking their vehicles in a static line-up, visitors could freely wander around.

Vehicles this year included a Panhard AML60, belonging to the French Army Re-enactment Group (FARG), Austen K2Y ambulance, GMC trucks, ‘Green Goddess’ fire engine and an unusual heavyweight Leyland ‘Hippo’ truck used in WWII. From the condition of some vehicles, it was clear to see that owners had spent a lot of time during lockdown doing maintenance and refurbishment.

A couple of vehicles had their engine bonnets raised for inspection and owners found themselves the centre of attention and kept busy with questions. The traders’ stalls attracted their fair share of attention with a mixture of curious visitors and genuine collectors keen to pick up a few items. A handful of collectors-cum-reenactors had put on displays of items, which included lots of weapons.

People were glad to be able to visit a show like this and the look on their faces was one of relief at being able to get out again. The static displays also showed that collectors had spent time renovating and sorting out items as well as devising new ways of showing the equipment. One collector used an air-drop container as a display case to show weapons used in WWII.

Andy Norman is a Somerset-based vehicle owner, a serious collector of militaria and re-enactor, wearing a British uniform to drive his M3 White Scout Car. He used the show to unveil a static display with a difference. It depicted a room in a farmhouse littered with military equipment as though it was being used as a radio and headquarters base. Webbing, personal kit and weapons were lying around as though the soldiers had just popped into another room. The walls were encrusted with soot from the oil lamps and items of furniture and civilian possessions were scattered about.

Andy explained that the display was all contained inside a trailer with drop sides and was meant to represent a typical farmhouse that an army unit would have used during WWII. He bought the trailer on eBay and had the idea of using it as a mobile display that he could tow to events behind his car. Wooden boards produced the right effect and using items from his extensive collection, he has created a mobile museum that looks authentic.

If what was on show at Haselbury Mill as a small event is an example of the standard of display achieved by enthusiasts during lockdown, then it raises the question: ‘What else can we expect to see when the big shows start again?’ Indeed, what does lie in store for us? All the surprises awaiting the expectant visitors can only be guessed at but we can be sure that whatever is revealed, will be incredible and show how time was well spent in creating new and wonderful displays for an appreciative public.