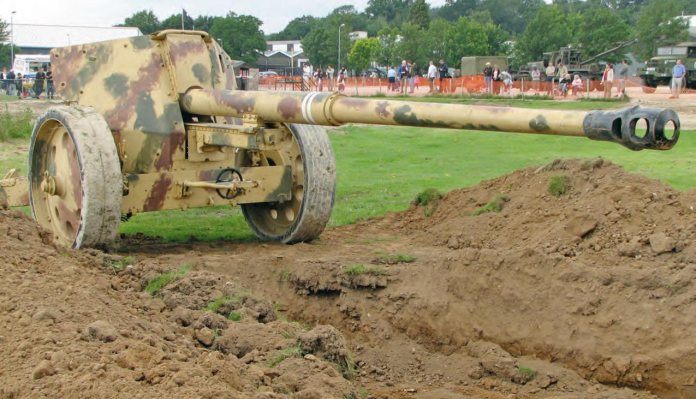 When the German army launched its westward Blitzkrieg in May 1940, the Allied armies of Britain, France, Belgium and Holland for the first time experienced the weight and power of weapons which they would quickly come to fear and respect. One of these weapons was the 8.8cm anti-aircraft gun, which had been used in the anti-tank role during the Spanish Civil War, 1936-1939. Now it was being used in that role again with devastating effect. 30 months later, in November 1942, following Operation Torch, the Anglo-American landings in North Africa, the American army would join its Allies in holding the ‘88’ in equal measure of awe and dread.

So, where did the gun come from and how did it gain its reputation? The story begins during WW1 when the German army used an antiaircraft gun with a calibre of 8.8cm, copied from a design used by the German navy. Known as the Fliegerabwehrkanone 16, or more simply the FlaK 16, to mean aircraft defence cannon, it would become the template from which the legendary 88 of WWII would be developed. After the end of WWI, German armaments engineers went to Sweden to work for the company of Bofors in which German industrialists held majority interests. These German engineers secretly continued to develop the 88, with the first serviceable version appearing in 1928 as the Flak 18.

Over the next several years the gun entered service with the German army during its rearmament programme and would later be sent to support Franco’s Nationalist forces during the Spanish Civil War. Meanwhile, the weapon’s design and ammunition were being improved and the next version, known as the Flak 36, appeared. It incorporated many advanced improvements to speed up loading and firing. The dual role of the 88, as demonstrated in Spain, would be a feature in all other versions of the gun throughout its service life, including the FlaK 37, which also became known as the PaK 37, Panzerabwehrkanone or anti-tank gun.

During WWII the 88 would be used in all theatres where the German army and its allies fought, from North-West Europe to Russia, Italy and North Africa, to the Balkans and even at sea on some U-Boats and surface warships. The gun was also mounted as the main armament on armoured vehicles, being known as the KwK, standing for Kampfwagen-Kanone, the most famous of which was the Tiger I. Other vehicles included the Elefant, Jagdpanther, Tiger II and Nashorn. Anti-aircraft versions of the 88 were also mounted on flatbed railway carriages for mobility. All versions of the 88 were mounted on wheeled trucks and half-tracks such as the SdKfz 8, but it was the towed versions, capable of firing from their trailer carriages, that expanded their deadly reputation against tanks on the battlefields of Italy, North-West Europe and Russia.

The 88 served in the dual role of anti-aircraft and anti-tank gun, progressing through several versions, each more powerful and with improved performance, which culminated with the FlaK 41. The gun, in all its versions, was used throughout the war and after 1945 was used by several countries including Greece. In 1943, the armaments company of Krupp was awarded the contract to produce the version known as the PaK 43. There were manufacturing problems which were overcome by the company of Rhinemetall-Borsig and resulted in a version known as the PaK 43/41, which was fitted with a huge gun shield, leading to the troops calling it the ‘Scheunentor’ (Barn Door).

This version, with a longer barrel, fired three types of new, more powerful ammunition than that used by other versions of the 88. This was known as Panzergranat 39, with the standard armour-piercing round weighing 22.9 lbs complete and a muzzle velocity of 3,282 fps to penetrate 167mm of armour at 1,100 yards. The more powerful armour-piercing core rigid weighed 16.1 lbs with a muzzle velocity of 3,710 fps and was capable of penetrating 192mm of armour at 1,100 yards. Finally, the HE shell, weighing 20.3 lbs with a muzzle velocity of 2,640 fps, could be fired out to a range of 19,000 yards. The KwK version of the PaK43 fired other ammunition types, including the APCBC-HE, which stood for ‘armourpiercing capped ballistic cap-high explosive’.

In the anti-aircraft role, the 88 served as the backbone of German home defence against Allied bombers, with thousands deployed around the major cities, such as Berlin and Hamburg. In the anti-tank role, it served right until the final battle in the heart of Berlin in May 1945. The reputation it gained during the war has lasted to the present day and those examples on display in museums such as the IWM in London, Fort Nelson near Portsmouth, the Muckleburgh Collection in Norfolk and many others around the world, continue to attract great attention.

When it came to air defence, the Germans developed a strategy called ‘PaK Fronts’ - powerful defensive points comprising antitank weapons concentrated around 88mm guns. These took a high toll of tanks and were used mainly in Russia but the tactic also featured in the battles in the west and Italy.

Owning an example of the gun itself is possible, with some in private ownership, but they are expensive to acquire. Sometimes owners will display their 88 at shows and on occasion allow re-enactors to use them in static displays and demonstrate the gun in action. The PaK 43 in the collection held by the Tank Museum in Bovington has been used in arena displays being towed by an SdKfz 7 prime-mover and even to fire blank charges. Like the Tiger tank with its 88 gun, such displays are unforgettable.

One of the most unusual displays involving the 88 has to be that involving an all-female re-enactment group called ‘Females Re-enacting Axis Forces’ or FRAU, which in German means woman. They were portraying Flakhelferin or ‘FlaK Helpers’, a role well-documented in records and shown in photographs. By August 1944 there were around 450,000 females serving in the role of anti-aircraft FlaK Helpers, so the depiction was correct. Many groups depicting German armed forces have excellent female units but FRAU expands on the roles they can recreate. More information can be found on the website (www.f-r-a-u. page.tl) but please be aware that the site does not appear to have been updated for some time and security may be compromised, so please treat with caution. Alternatively, the group can be contacted through Facebook.

The reputation of the 88 is such that interest in it reaches from ballisticians to engineers, military enthusiasts and even modellers who use it to produce incredibly detailed dioramas. For collectors, there are items associated with the gun, such as sight units and examples of inert ammunition, which can usually be found for sale at larger militaria fairs and shows such as War & Peace. Prices for such items vary according to type and condition, but to own a piece of history with such associations is worth it in itself. There is no sign of interest being lost in this fascinating gun, which was once the most feared weapon of its age.