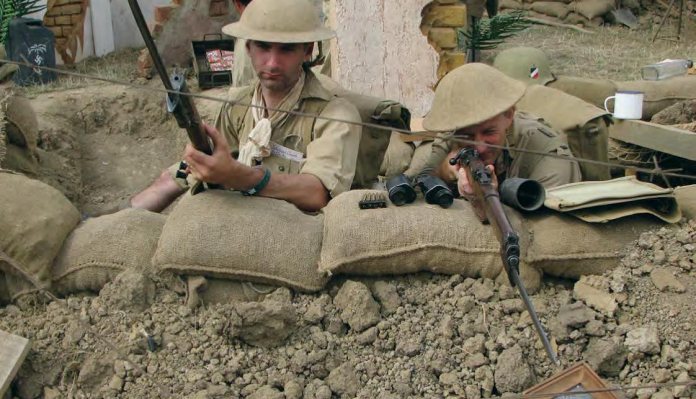 On the 10th of June 1940, in the closing phase of the Dunkirk evacuation, Mussolini declared war on Britain and France, taking Italy into the war as Germany’s ally. Eight weeks later, on the 4th of August, Italian troops attacked British Somaliland in North Africa, opening up another front of the war. While the German Luftwaffe was bombing Britain, Italian troops were advancing across other territories in North Africa. They began by attacking towards Egypt, a British protectorate, on the 11th of September.

By the 16th of September, the Italians had reached Sidi Barrani, located on the Mediterranean coast, 50 miles inside the Egyptian border, and built up a force of 60,000 men. At the time, Italy had some 300,000 men in the area of what is today, modern Libya. The British had 30,000 to oppose them. The foundations were now set for a campaign that would last for three years, ending on the 13th of May 1943 with the surrender of the Axis forces of Italy and Germany.

It would be a tough campaign fought over hundreds of thousands of square miles of harsh, desert terrain, under the most severe of conditions. This inhospitable region would also be the place where many specialist units would be raised and tested in battle. For the British, this included the Special Air Service (SAS), Long Range Desert Group (LRDG) and the ‘Popski’s Private Army’. It was also where the nascent British Parachute Regiment was first tried in battle. For the Germans, it was the battleground of the speciallycreated, ‘Deutsche Afrika Korps’ (DAK). The Italians deployed the parachute unit, ‘Folgore’. Troops of other Allied nationalities also served in the theatre, including South Africans, New Zealanders, Australians, Indians and the French.

Field commanders on both sides would gain international reputations, including Erwin Rommel, known to the Allies as the ‘Desert Fox’, Bernard Montgomery, universally known as ‘Monty’, and after ‘Operation Torch’ in November 1942, the American General George S. Patton would be added to the list. Weapons, tactics and logistics would all be tested to the limit and the battles fought, such as El Alamein and Tobruk, grabbed newspaper headlines around the world.

There is a natural cross-over point into the field of interest for militaria collectors and military vehicle owners alike, which in turn leads to re-enactment groups depicting regiments who fought in the North African theatre of operations. One unit of particular interest to all these enthusiasts is the British 7th Armoured Division, the ‘Desert Rats’. Raised in 1938 by Major-General Percy Hobart, it would go on to gain international recognition and its regimental badge, showing a jerboa, a rodent indigenous to the region, in red with a white background, would become an item of interest to collectors.

In March 1941, America ratified the Lend Lease Act to Britain.

This guaranteed supplies of weapons, vehicles and equipment, a full nine months before America came into the war. The tanks supplied to Britain included the M3 Grant Lee, M4 Sherman and M3 Stuart tanks, all of which would be used in North Africa for the first time to face off against German Panzers. Trucks and motorcycles were also used by all sides and today some owners paint their vehicles in the colour scheme of North Africa and add divisional badges of the units which fought there, including the yellow cross on a white shield against a blue background. This belonged to the British 8th Army.

The duration of the campaign, its diverse nature and the different nationalities involved, makes it an ideal subject which collectors can get inspiration from in order to begin collections. This includes medals, weapons, photographs, diaries and personal items, which are snapped up almost as soon as they appear for sale. There are even battlefield tours which take visitors to the sites where men like the New Zealander, Charles Upham, won the Victoria Cross.

Closer to home, just how do re-enactors set about creating an impression to depict North Africa in a country which is green and full of trees? Some groups opt for the easiest solution and use sand-coloured hessian laid out to give the impression of sand. This works well, is free from mess and is relatively inexpensive. Some groups have been known to go all out for authenticity and arrange for deliveries of sand to create a realistic setting. Displays are then built onto this background, including prefabricated adobe-style buildings, plastic palm trees and battlefield debris.

Khaki tents are quick to erect and can be kitted out for a range of purposes, including a medical centre, cookhouse or headquarters centre complete with radio equipment. They blend in perfectly and vehicles can be parked close to create a life-size diorama, which any modeller visiting the show would find useful as a reference point. Displays featuring the Afrika Korps are always popular and if someone depicting Rommel is present, that always attracts visitors.

Battle re-enactment scenarios have been organised at shows to give the visiting public an idea of things. One of the best shows where this has been achieved is at the Tank Museum at Bovington in Dorset, which has the only functioning Tiger tank in the world in its collection. The annual Tankfest, usually held in July, sees a good turnout by groups who put on first-rate static displays based around items such as the 25-Pounder field gun, painted in the right colour scheme, with lots of hessian.

The North African campaign means groups can depict ANZAC troops, with the Australians in their distinctive ‘slouch’ hats. This has also led to the appearance of ‘Monty’ wearing his unique slouch hat covered in regimental badges to recreate an iconic image from the war. Another recreated famous image is of Rommel standing by a tank looking immediately recognisable. Individual re-enactors just sitting in a vehicle or taking up a firing position behind a barricade creates the right effect.

It is fitting that the Tank Museum’s Tiger tank should be used in the North Africa battle re-enactment scenarios, because it was captured intact, having been incapacitated during an engagement in Tunisia. Now fully renovated, it is sometimes painted in Afrika Korps colours to join other German vehicles in arena displays to show what type of vehicles were used in the campaign. It is a rewarding sight to see, which is made complete when set off by the presence of re-enactors depicting DAK troops.

The North African campaign was a protracted series of battles which wargamers use as a subject for their hobby, and for them to see these displays make it a period of interest to all military enthusiasts. Film buffs will recognise many items and vehicles from battles such as Tobruk or El Alamein on display at shows, having seen them in productions such as ‘Sea of Sand’ and ‘Ice Cold in Alex’, both from 1958.

It’s good to see displays on this campaign being featured at shows because it is so different from the European theatre of war. Importantly, they serve to remind visitors it was where the first Allied victories over the Axis forces were achieved on land.