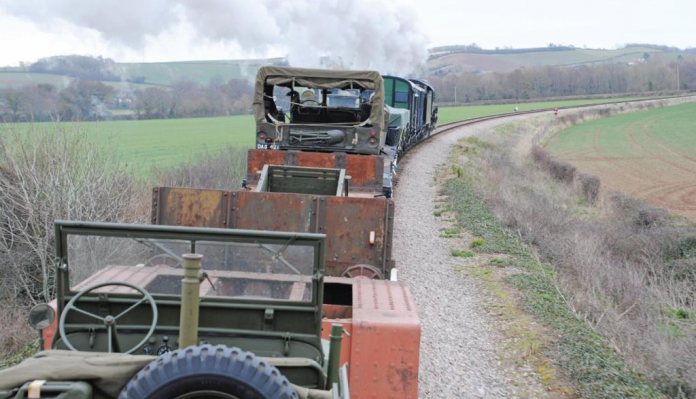 Helmuth von Moltke (The Elder), the Prussian army’s Chief of Staff, in pointing out the importance railways would have in war said: “…don’t build fortresses, build railways…”. Later, Count Alfred von Schlieffen, Chief of General Staff to the German army, and whose plan formed the basis of the attack against France in 1914, echoed those words when he said: “Don’t just count battalions, count railways…”. The wise words of both these men came before both world wars and how right they were because railways would prove vital to the conduct of these conflicts. However, if trains were important during WWI, they were invaluable assets during WWII. Without the railways the masses of troops and equipment could not have been moved and logistics transported thousands of miles to keep the armies functioning. As transport for civilians, trains were essential for workers going to the factories and moving the finished products.

Railways have always been popular, attracting a following of enthusiastic devotees which over time has expanded to now include re-enactors. At first the interest was slow, but it was there, which encouraged event organisers to persevere. During WWII films appeared which featured railways, such as ‘Brief Encounter’ in 1945 and the 1941 comedy ‘Ghost Train’, provided audiences then with entertainment and today are viewed with nostalgia.

The interest in vintage weekends is such that event organisers welcome more WWII re-enactors to help in creating memorable wartime weekends. Social media networks have been a great help in spreading the word about steam train wartime weekends. The result is a great success with the idea spreading from the smallest vintage steam railway line to the larger lines. Some lines have long-established WWII events, such as the North Norfolk Railway Line, while others, such as the West Somerset Railway at Minehead held its first WWII event in 2018, which was a resounding success.

There are around 130 vintage steam railway lines operating passenger services across the country, with hundreds of miles of tracks between them, all of which are run by volunteer enthusiasts. With such an adaptable resource it made perfect sense to invite re-enactors along to turn back the clock to the 1940s. Re-enactors gather on the platforms waiting for the trains, civilians and military alike, where they mingle to recreate the atmosphere into which visitors can join as a complete experience. Period entertainment with singers and music completes the effect and it is like being transported back in time.

Life on the line

The range of themes using railways as a backdrop to an event is very diverse, from being vintage for civilians, a military train for service personnel or a mixture of both, such as the Christmas Leave Train organised by the Watercress Line (watercressline.co.uk). This event is being held on 26-27 December this year and allows military and civilians to mingle just as it happened during the war years with people travelling home for Christmas. Visitors come to join in this very popular event which is full of unexpected and very pleasant surprises.

Some lines organise specific roles for the trains, such as an evacuee train complete with WVS ladies acting as escort for children who thoroughly enjoy the experience. The presence of policemen and women in period uniform adds to the effect and it looks like wartime film footage. Such events are not entirely out of place against these settings because many of the vintage lines hosting these re-enactment events were used during the war. The evacuation of children from cities such as London, in order to escape the bombing, is commemorated by memorials such as the statue of Doreen Ash on the platform at Donyatt Halt, near Ilminster in Somerset.

Re-enactment events which are staged around railway stations allow more people to become involved, including the train drivers, engineers and footplatemen. Other members of staff also join in with the display on the platform as the guards asking for tickets. These events are an extension of re-enacting the Home Front and participants travel on the trains with baskets of shopping and for some light-heartedness ‘spivs’ try to tempt passengers with nylon stockings and other wartime luxuries.

On those vintage lines with stations on longer stretches of track, such as North Norfolk Railway (nnrailway.co.uk), the North Yorkshire Moors Railway (nymt.co.uk) and the Watercress Line, the re-enactors set up various displays for passengers to visit including bomb disposal, first aid and routine daily life. On the Gloucestershire and Warwickshire Steam Railway near Cheltenham (gwsr.com) arrangements include displays of military vehicles at the stations.

Another station which includes military vehicles is the West Somerset Railway (west-somerset-railway.co.uk) which has over 20 miles of track, and during the war served the military training camps in the south west. The line operates a special supply train to transport vehicles during its 1940s weekend to show how a convoy train would have looked in the build-up for D-Day. This is of interest to vehicle enthusiasts and is something extra to see. Vehicles also park in the grounds of the stations and are often driven from one location to another.

In some cases, especially the more rural stations, it appears as though time has stood still at these vintage railways. Buildings shown in photographs dating back to before the war still look the same today as they did more than 80 years ago. Those residents living locally who were children during the war, remember the troops and how busy the lines were with trains passing along the route. Such memories help organisers develop the events and the information is passed on and preserved.

Re-enactment events involving vintage steam railways often have a lot of spare land available to them, such as Buckfastleigh in Devon, where static camps can be set up as additional interest for visits to see. This facility also suits traders offering collectables from books to militaria and other items of interest. At Sheringham in Norfolk, the town has become a fully integrated part of the annual 1940s weekend organised on the North Norfolk Railway. There are many traders in the town and even the cafes and restaurants join in by offering refreshments themed in the wartime style.

These events are truly inclusive and everybody of all ages can become involved and take part. Some events, such as the North Norfolk Railway and North Yorkshire Railway, attract re-enactors from all parts of the country and with this influx comes new ideas to help grow the event. Simple ideas like policemen on bicycles, ladies pushing prams, tending allotments and service personnel going home on leave and waiting for the train to arrive. Best of all, though, is the fact that these re-enactment displays can be organised for any time of the year as demonstrated by the Watercress Line with its Christmas Leave Train. Vintage railway events can now be found happening across the country, from Wales to Yorkshire and even the Isle of Wight. If you have not yet taken part in one of these atmospheric events, look at the websites for dates and jump aboard one of the trains for a unique historical experience.