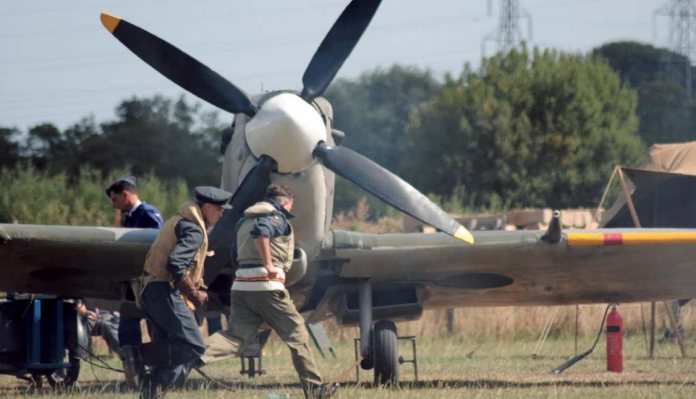 When France surrendered to Hitler on 22 June 1940, Britain was still reeling from the after-effects of the Dunkirk campaign and now, with France gone, the country stood alone. Only four days earlier, on 18 June, Winston Churchill as the newly appointed Prime Minister delivered a stirring speech to prepare the people of Britain for lay ahead. He broadcast on the radio: “What General Weygand has called the Battle of France is over. I expect the Battle of Britain is about to begin”. He made many patriotic references and his tone exuded defiance.

The wait was not long before the Germans made their next move. On 10 July a force of around 120 German aircraft entered British air space and began to attack targets, including radar sites and airfields. The RAF responded, scrambling Hurricanes and Spitfires to intercept the enemy. The engagement was brief and three German aircraft were claimed destroyed for no losses to the RAF. It was a foretaste of what was to come as the fighting intensified.

This year marks the 80th Anniversary since those inspirational words were spoken and today we can remember and reflect on the bravery of the men and women who took part in the Battle of Britain. Re-enactment groups depicting the RAF present displays at events, including life-size replicas of Spitfires and Hurricanes, to commemorate ‘The Few’, as the pilots became known at the time and have been known as such ever since. The Battle of Britain is one of those rare subjects which re-enactors can present either as an indoor or an outdoor display. It also allows male and female re-enactors to become equally involved.

It is an episode of the war which can be told from either the German or British perspective and include all members of a group from the young, who can depict the pilots, to the older members who can depict officers or ground crew. Displays can be created using items obtained from various sources including original pieces of equipment or reproduction kit all the way up to full-size replica dispersal huts and on occasion even a Messerschmitt Bf109 has been known to turn up. They are also full of action as pilots scramble to their aircraft at the sound of a bell, running with great urgency.

Across the country there are groups depicting the RAF such as the WWII RAF Group (ww2.rafgroup.org) which attends various events to put on displays, including the absorbing role of the plotters which was a mainly female occupation. With banks of telephones, tabletop maps and screens to indicate the readiness of each squadron, it is like looking in on a full functioning Operations Room. These rooms were the nerve centre of each Fighter Group and it was they who guided the fighters to intercept the enemy. All this is conveyed in displays, including the tension, as the girls move the markers across the board.

At one such display, a famous visit to RAF Uxbridge by Winston Churchill on 15 September 1940 was re-enacted, when the Battle was at its height and everything was committed. On seeing how the Germans were in danger of overwhelming the fighters, Churchill enquired about reserves. He was told there were none. When moments like that are re-enacted it makes us realise just how close things were for the country and everything depended on pilots such as ‘Sailor’ Malan, from South Africa, ‘Johnnie’ Johnson who shot down 34 and the inspirational legless pilot Douglas Bader.

The subject of the Battle of Britain remains one of the most popular displays at re-enactment events and if the organisers can arrange a flypast by a Spitfire, then every head at the show looks skyward for a glimpse of the most iconic of wartime aircraft. If that cannot be arranged then the next best thing is a full-scale replica, some of which, like Graham Adlam’s aircraft, are fitted with replica engines and gas guns to provide realistic sound effects. Graham also trades in Battle of Britain memorabilia for collectors and details of his stocklist can be found on his website at spitfirespares.co.uk.

The German aspect of the battle also attracts a lot of attention and displays sometimes include a fullscale replica of a Me Bf109 along with pilots sitting, waiting for orders. Among the famous German pilots were Hans Joachim Marseille and Werner Molders who shot down a total 55 aircraft during the French campaign and the Battle of Britain. The most famous of all, though, was Adolf Galland, who survived the war. A photograph of him seated with his spaniel has become a famous image from the war and has been recreated many times and various events.

Some of the airfields which were used during the Battle, such as Duxford, Cosford and Middle Wallop, have museums on-site with exhibitions telling the part they played in the Battle. The RAF Museums at Hendon and Cosford (museum.org.uk) are both free to visit and each has excellent displays on the Battle. Some of these museums host regular events involving re-enactment displays to recreate the period, such as IWM Duxford where the ‘Flying Legends’ Show attracts a lot of visitors and collectors.

Many of the airfields have long gone, being turned over for development, but the role they played during the Battle of Britain is remembered through memorials. Some airfields, such as RAF Northolt, not only have memorials, some of the original buildings have been preserved as well as handling flights. Another similar site is Biggin Hill, on the outskirts of London, and was a main fighter airfield. There is a superb Battle of Britain memorial on the Embankment in London, but the National Memorial is at Capel-le-Ferne in Kent, on the heights overlooking Dover Harbour. It commemorates the nationalities of all those who served in Fighter Command of the RAF. It takes the form of a propeller with a lone pilot seated on the ‘boss’ in the centre, set within a frame of grassed earthwork shaped to create a pilot’s headset.

For full effect, the memorial is best viewed from the air. In fact, there are several websites offering flights over the site, it’s a question of making a choice. The Memorial site is closed at the time of writing, because of the Coronavirus Pandemic, as are other museums, but a ‘virtual’ tour is available to view online at the website, where full details of facilities on site, can be found at battleofbritainmemorial.org.

The date for the Battle of Britain is accepted as lasting between 10 July and 31 October 1940. During that period factories produced 1865 Hurricanes and Spitfires and RAF losses for the same period were 1850 aircraft destroyed or badly damaged, with over 900 pilots killed or wounded. The Germans committed over 2500 aircraft of all types. The Germans admitted to losing 896, but a more likely estimate puts the figure somewhere around the 2300 mark. The cost in pilots’ lives is difficult to calculate and some are buried in cemeteries across the country, such as Oberst Alois Stoeckl and Major Karl Ritscherle in the German cemetery at Cannock Chase. Others are buried in German cemeteries in France, such as Egon Meyer, who flew during the Battle of Britain and went on to shoot down 102 aircraft by the time he was killed on 2 March 1944, is interred at St Désir-de-Lisieux.

The telling of the Battle of Britain by re-enactors’ displays is always done with the respect that is due to the bravery and heroism of the men who flew and fought to defend the country. The members of the Women’s Auxiliary Air Force are also remembered for their bravery and dedication to duty. The history has to be told, including that of the Germans who, as servicemen, were doing what they were ordered.

This year we can commemorate the 80th anniversary of that time when the country was saved by young men and women from many nations. Unfortunately, due to the exceptional circumstances we are living through, there will be no formal ceremony. However, the Few of the original Few who are left understand this and know that they are in our thoughts.