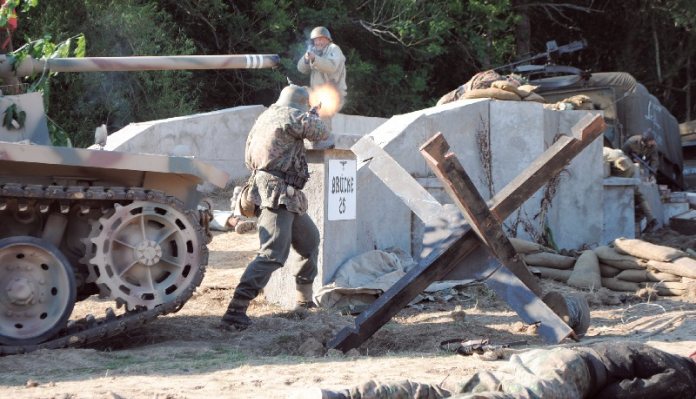 When it comes to preparing for either a film production or a stage play, there is a whole team, who go about their work to support these presentations, but they remain unseen. Yet, without their efforts, such plays and films would not enjoy half their success. Among these ‘invisible’ workers are the set designers, who are responsible for creating the backdrops, which make such productions as realistic as possible. The same thing applies to battle re-enactment, because without a backdrop created by a set designer, the action would take place in an open field.

However, by adding a few temporary buildings, piles of bricks or the odd stack of hay, strategically placed, and the transformation into a realistic setting is complete. Add the re-enactors and the result is an exciting production. In fact, the similarity between putting on a stage play or a film, and a battle re-enactment could not be closer. All three have the same aim, which is to entertain crowds of people and to do that they each require set designers, because these are the people who come up with the ideas to create the scenes.

Like films and stage plays, there are different levels involved in setting the scene for battle re-enactments. To create something special is a work of art and takes time. Of course, a good imagination and ‘Do It Yourself’ skills go a long way, also. Naturally, professional set designers working on films have a team employed for the task and a big budget. When it comes to staging a battle re-enactment, the budget is limited and the work is done by re-enactors themselves who willingly volunteer their services. It is their determination and hard work which makes a battle re-enactment a success.

Some venues allow the digging of trenches on site, but that requires an earth excavator if the work is to be completed in time for the event and not leave the re-enactors too exhausted to enjoy the show. The ‘finishing touches’ are completed by hand using shovels and this has the effect of being very convincing. Trenches were used during the American Civil War and WWI and at some events these structures are built to a size which allows visitors to walk through for a full effect. Earthworks can also be built to recreate emplacements for English Civil War artillery or positions for either anti-tank guns, mortars or machine guns in WWII scenarios.

Some re-enactors go to extraordinary lengths to recreate the right set for their battle reenactment display, to the extent where they will deliberately tip over a vehicle onto its side to look as though it has been caught in an explosion. This requires a lot of organising and heavy lifting equipment. The result is spectacular and very realistic. Some groups have built modular structures of houses, which can be transported to an event like some gigantic ‘flat-pack’ and assembled on site. Additional parts can be included, such as gates, walls and railings; put in some furniture and the effect is complete.

The houses are very well built and, along with a careful application of paint, they can be rendered in the style of the period, including both world wars and even the Vietnam War. The structures are constructed from wood and some have special strong points, which allow reenactors to occupy the first floor, from where they can look out the windows. Groups also use the buildings to site weapons such as machine guns, just as they were during the war. Other designs have had the appropriate ‘battle damage’ applied to produce the effect of demolished walls, to expose the interior showing staircases and charred woodwork. More bulky structures, such as bunkers, are built using polystyrene, which can be painted to resemble concrete. These are lightweight for transportation and when assembled are large enough for men to stand inside for realistic effect.

At some of the larger battle re-enactment scenarios, several groups will combine their resources to recreate a setting which also includes recreated bomb craters. With careful co-ordination and skilful management vehicles, including, tanks and Jeeps, can be driven through these settings, just as seen on a big budget film set. In such cases, the battle scenario can begin among the buildings and then move out into the open to show vehicle mobility.

At one memorable show, a group decided to present a battle re-enactment to recreate the Battle of the Bulge, which, as most people know, was fought in the snow around the Belgian town of Bastogne. All very well you might think, but this was the middle of the summer in the Kent countryside. The scene was set, complete with halfdestroyed houses, vehicles and even telegraph poles, and the re-enactors took their places, suitably dressed in white, winter camouflage. Just before the battle commenced, it began to snow as snow machines blew a blizzard across the scene. It was very surreal but, at the same time, very authentic.

Indeed, when it comes to creating realism, re-enactors know no bounds. One of those who really engages with setting the scene is Dan Butler, who, along with others, portrays the 116th Regiment of the 29th Infantry Division, which landed on Omaha Beach on D-Day. Dan, a builder by trade, is well-known to re-enactors, especially for his remarkable creations, which in the past have included bunkers, complete with anti-tank guns, and entrances to mines complete with railway tracks.

Of all his creations, though, his most outstanding masterpiece was a full-size replica V-2 rocket, ready for launching, which will never be forgotten by anyone who saw it. The rocket, standing over 45-feet in height, dominated the show and could be seen from anywhere across the Hop Farm in Kent. The scene also included a destroyed railway line, sentry tower and earthworks. It was worthy of any film set designer and the battle re-enactment action was thrilling. However, it should be remembered that displays like this do not come along very often.

It is not just static sets which designers utilise to create the right scene, mobility can be incorporated into a display. During WWI, armies laid narrowgauge railways to transport ammunition and other supplies to points along the Front Line. This was recreated at one event to commemorate the First World War and was set among trenches and craters to reproduce a scene straight from film footage of the day. Napoleonic battles are supported by backdrops to replicate the fighting around Hougemont Farm at the Battle of Waterloo. Village huts built on displays make the Vietnam War that more understandable when created by groups such as the AIPS or Rolling Thunder.

The displays at re-enactment displays are many miles from where the events took place and many years after the fighting ended. However, by recreating settings, re-enactors make their presentations that more understandable by showing things in all dimensions. A good example of this is displayed the group depicting the 101st Airborne Division in Normandy with their Normandy farm building, circa 1944, erected at Weybourne Station on the North Norfolk Railway during the annual 1940s Weekend. The partially destroyed house allows visitors to enter, with soldiers in the attic, to get a feel of what it may have been like.

Bringing the curtain down

After the show, it can be folded down for storage or transporting to the next event. Re-enactors are very clever and capable of conjuring up stage props to set most scenes, from submarines to houses and, given half the chance and the right materials, quite possibly they could even build a castle. What they will produce next is only limited by requirement and their imagination. But one thing is sure, that whatever they produce, the effect will be amazing.