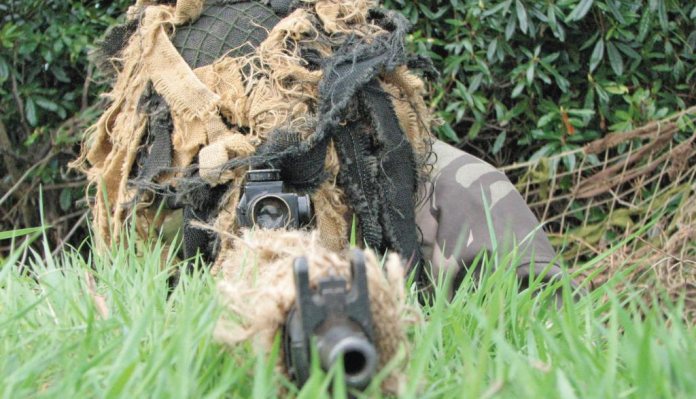 Re-enactment shows are spectacular because of the variety of displays put on by the participating groups which exhibit collections of items associated with a particular period. Members of the groups take on roles and duties at these shows which range from cooking to being a soldier engaged in the battle reenactment display. A lot is going on at these displays which does not become immediately obvious. Then, the surprise is sprung as some members of the group emerge to reveal themselves, such as a sniper, who is probably the most secretive soldier on the battlefield.

Many books have been written about the art of sniping, the weapons and tactics, even the exploits of individuals have been recounted such as the Russian sniper, Sergeant Vasili Zaitsev, mentioned in the 1973 book ‘Enemy at the Gates’ by William Craig. Later, this was given greater prominence in the 2001 film of the same name. Since the publication of the book and others, such as ‘The White Sniper’, which is the story of Simo Haya of the Finnish army, who fought against the Russian invasion between 1939 and 1940, notching up 542 confirmed kills, the depiction of snipers has become a feature at re-enactment events.

People have become fascinated by the role of sniper which can be presented from the period of the American Civil War to the modern conflicts including Afghanistan. Their role on the modern battlefield, with all the ‘hi-tech’ equipment, may seem redundant today, but snipers still have a very important part to play in military operations by providing support fire against selective targets. One of the first incidents which can be considered as sniping was performed by Tom Plunkett of the 95th Rifles, when, using his Baker rifle, he shot and killed French General Auguste Colbert and his aide Latour-Maubourg at the Battle of Cacabelos on the 3rd January 1809. The firing position Plunkett adopted was unorthodox, being supine, which is lying on his back, to shoot at his targets. I have seen this recreated at various Napoleonic events, including the 190th anniversary of the Battle of Waterloo back in 2005. Sniping was used during the American Civil War and I have seen depictions of this recreated at events complete with weapons fitted with Malcolm-type telescopic sights of the period. It was a Confederate sharpshooter, an early term for a sniper, who shot and killed Union General John Sedgewick at the Battle of Spotsylvania on the 9th May 1864 at an estimated range of 800 yards with a Whitworth hexagonal bore rifle.

Whilst accurate shooting remained important it was not until WWI that sniping began to be taught as a useful tactic in war. The first designated snipers, using special optical sights fitted to rifles for the purpose, began to appear on the Western Front after receiving proper training. The Germans, French and British snipers operated along the trenches and sometimes even developed elaborate firing positions such as fake trees fashioned from canvas and wood. The new skills demanded patience to wait for a target to present itself.

They had no special camouflaged uniform, but the types of weapons they used have become of great interest to collectors and weapons historians. All sides used standard issue service weapons and civilian hunting rifles ranging in calibres from .375 to .276. One British officer, Hesketh Vernon Hesketh- Prichard, made it his purpose to improve sniping in the British army. He wrote an instruction book on the subject, Sniping in France, which contained many important and valid points concerning fieldcraft, aiming and when to fire at the optimum moment.

The best snipers in the Canadian army were those ‘First Nation’ who used their traditional hunting skills in the role. Francis Pegahmagabow, known as ‘Peggy’ of the Ojibwa tribe had a tally of 378 confirmed kills.

Some Canadian snipers used the Ross rifle because of its inherent accuracy. As a combat rifle in the trenches, it was too delicate but as a sniper rifle, it proved it’s worth being used by men such as Michael Ackabe a First Nation of the Wabigoon Band. When America entered the war in 1917 they used the M1903 Springfield rifle fitted with either the M1913 Warner & Swasey sight or the Winder ‘sighting tube’. These weapons and optics are of interest to collectors.

One of the top-scoring British snipers was Private Thomas Barratt who served with the 7th Battalion South Staffordshire Regiment. He won the Victoria Cross for his actions on 27th July 1917 but was killed that day. Re-enactors who recreate ‘walk through’ trenches at shows for the public to visit sometimes include impressions of snipers, complete with telescopic sights and explain the role of the sniper and the weapons used. Such a display within a display is something different and expands on the general impression by going into specialist areas.

By WWII the role of the sniper had developed into a new level of importance, not only with specialist weapons and sights but also the camouflage suits, known in the British army as the ‘Ghillie suit’. Snipers were used in all armies, but it was the Russian army which came to dominate the role and even elevate some of them to what we today would consider ‘celebrity’ status because of their achievements. It is an automatic assumption that it would be a role dominated by men, but in the Russian army, there were hundreds of women snipers, all of who were absolutely deadly. Women like Rosa Shanina, with 59 credited kills, Luyudmila Pavlichenko, with over 300 confirmed kills, and Nadezhda Petrova, with 122 kills, including eleven in one day.

These women and others, like Kyra Petrovskaya, whose count was never published, were called ‘flintenweibe’ (women of steel) by the Germans who feared and stood in awe of them by degrees. The service records of these women give female re-enactors something to really set about recreating, from their 91/30 Mosin-Nagant rifles fitted with NU optical sights, through to the special camouflage suits they wore. One re-enactor who helped me by recreating a publicity image of Kyra Petrovskaya was Jennifer Mason, whose portrayal was perfect and showed what can be achieved.

History books are full of accounts referring to men being hit by so-called sniper fire, but these were probably shot by stay behind solitary riflemen rather than properly trained snipers. These lone riflemen are described as ‘sniping’ from church towers or trees. No self-respecting sniper, properly trained, would cut him- or her-self off from an escape route. The episodes in the 1998 film, Saving Private Ryan, where snipers fire from the church tower is great stuff straight from Hollywood, but it is not correct. A sniper uses stealth and guile to acquire a target, shoot and move away unseen to a new location. That is how they survive, as any good shooter and re-enactor will know through research.

The Canadian army produced good snipers in WWII, such as Sergeant Harold Marshall, of the Calgary Highlanders. His photograph where he is holding a No4 MkI*(T) rifle fitted with a No32 sight has become an iconic image of the war and some re-enactors depict his character. Meanwhile, the version of the rifle has become a highly-prized collectable among weapon enthusiasts. The Germans used the Zf.-Kar98K rifle of 7.92mm calibre, fitted with a Zielvier optical sight and on the Eastern Front, snipers would use captured Russian Mosin-Nagant rifles. Two outstanding German snipers were Joseph Allerberger and Matthaus Hetzenauer, with 257 and 345 confirmed kills respectively. Reenactment groups depicting German units sometimes include snipers in their displays.

A British re-enactment group which depicts the Lovat Scouts have created a display to show sniping skills in WWII. The Lovat Scouts served in Italy from 1944 until the end of the war and excelled in the sniping role, and the group shows the weapons and equipment used in action. Occasionally other groups will depict snipers to represent other theatres of war, including North- West Europe.

Re-enactment displays of modern snipers and their weapons are of great interest to collectors and enthusiasts and the general public alike. They show things in real-time which they have seen on the news from war zones such as Iraq and Afghanistan. The weapons range from the British made Accuracy International L115A3 chambered in .338 Lapua Magnum up to the heavyweight Barratt or McMillan TAC-50, .50 calibre rifles. A Canadian sniper engaged and hit a target at the range of 3,540m using a McMillan .50 calibre, while Craig Harrison, serving with the Household Cavalry in Afghanistan, used an L115A3 to hit a target at the range of 2,475m.

Of all the different types of re-enactment displays, it is those where sniping is depicted which have the widest historical range and being of great fascination to collectors, shooting enthusiasts, re-enactors and the general public visiting shows. Surely there cannot be many specialist displays which can claim to appeal to such a cross-over of interests.