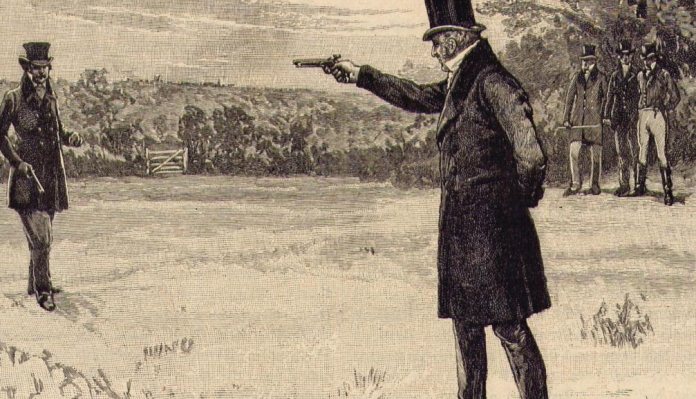 In 1819, after a military career spanning almost 30 years, the Duke of Wellington entered British politics, being appointed to the post of Master General of Ordnance in the Conservative Government of Lord Liverpool. Only 9 years later, with political experience behind him, Wellington was elected Prime Minister in 1828. The position brought him new political adversaries who were keen to debate and argue against his decisions.

Indeed, it was not long before he was facing George Finch-Hatton the 10th Earl of Winchilsea (sometimes written as Winchelsea) who was opposed to his proposal for conceding to Catholic emancipation, which would give them the right to sit in Parliament. It seems strange to think that voters could elect Catholic politicians, but due to their religious beliefs in a Protestant country, they were barred from taking their seats. Wellington’s decision overturned that and, in the process, gained outspoken opponents one of whom was Lord Winchilsea, who went further than the rest and wrote a series of defamatory letters to the Standard newspaper, in which he expressed offensive opinions about Wellington. In these letters he declared that in allowing Catholics to take their elected seats in Parliament, Wellington must have some ulterior motion, stating that, ‘under the cloak of some coloured show of zeal for the Protestant religion’he [Wellington] was planning ‘an insidious design for the infringement of our liberties and the introduction of Popery into every department of the State’

Such an action could not be ignored and Wellington wrote to Winchilsea requesting an apology. Letters were exchanged between the two men and throughout the course of correspondence Winchilsea remained firm in his convictions to which Wellington responded by demanding, ‘satisfaction for conduct which a gentleman has a right to require, and which a gentleman never refuses to give’. In effect, Wellington had ‘called out’ Lord Winchilsea and was demanding a duel to settle the affair of honour. Wellington was known to be opposed to duelling, but here he was showing how far he had been provoked to issue such a challenge. Winchilsea had no military experience but nevertheless accepted the challenge and the two men agreed to meet at Battersea Fields in London on Sunday, 21st March 1829.

Wellington had joined the 73rd Regiment of Foot in 1787 at the age of 18, going on to serve in many campaigns. His final battle was Waterloo in 1815, where his victory over Napoleon made him the hero of the age. Yet, despite all his military service, he was alone in believing himself a creditable shot. His status meant he was often invited to attend shooting weekends and it was during one such trip in 1820 he told Lady Shelly, ‘I have been shooting pretty well lately’. Unfortunately, his claims did not match his ability, which was so bad it terrified Lady Shelly’s young daughter. When he shot Lady Shelly’s laundry woman, Wellington made a token reparation payment of one guinea for the wound. To this Lady Shelly remarked to her servant, ‘this ought to be the proudest moment of your life. You have had the distinction of being shot by the great Duke of Wellington’.

In 1823, at Wherstead Park in Suffolk, Lord Granville became another victim of Wellington’s poor aim when he received facial wounds. Gamekeepers across the country frequently found themselves having to take cover from Wellington’s guns and Captain Thomas Browne, who had known Wellington since the Spanish Campaign, considered his former commanding officer, ‘a very indifferent shot.’

According to duelling protocol seconds were appointed, with Sir Henry Hardinge representing Wellington and Lord Falmouth representing Winchilsea. A doctor had to be in attendance and this was John Hume, who was Wellington’s physician. It was only at this point that it was discovered that neither man owned pistols and it fell to Dr. Hume to supply the weapons. Hume recognised Wellington as he rode to the meeting point who greeted the doctor with friendly familiarity: ‘Well, I daresay you little expected it was I who wanted you here.’ To which Hume replied: ‘Indeed, my Lord. You are the last person I should have expected here.’ Wellington was anxious to get the whole matter concluded as quickly as possible, so that he may return to the normal proceedings of his daily routine.

Whilst waiting for the arrival of Lord Winchilsea, Wellington leapt over a small ditch and gave instructions to his Second, ‘now then, Hardinge, look sharp and step out the ground, I have no time to waste.’ A distance of 12 paces was measured out at which point Wellington called out his objection to where Winchilsea would be placed: ‘Damn it, don’t stick him up so near the ditch. If I hit him, he will tumble in.’ Hardinge was responsible for loading the pistols, but he was having great difficulty because he had only one hand, having lost the other during the Battle of Waterloo. As the doctor in attendance, Hume would normally avoid direct involvement in a duel, but now he found himself loading the pistols.

When all was ready and both men were in position, Hardinge gave the command for the men to fire. Winchilsea’s pistol arm remained by his side. Wellington raised his pistol and deliberately aimed wide and fired. Winchilsea responded by firing in the air, an act known as delouping when duelling. After the duel, the two men exchanged brief correspondence and the affair was concluded when the two men departed the field with the same ‘cold civility’ as they had met.

That should have been an end to the affair but the newspapers saw a sensational story in the duel, with The Times of London stating: ‘The Duke of Wellington is the last man on earth who should be called upon to defend himself by duel against any attack on his public character.’ The Morning Herald proclaimed that Wellington’s actions had thrown London into ‘great ferment’. With each of the men holding high political office, they should have known better than to engage in an act that could have resulted in dire consequences had either been killed by their opponent. The final word on the matter was left to King George IV, with whom Wellington had an audience at Windsor Castle later on the day of his duel, where he is understood to have said that he was delighted with the duel and that he would have done the same. The fact that duelling was not legal in the country meant the two men had broken the law, but its practice was unofficially tolerated.

Some gunsmiths, such as Durs Egg and Joseph Manton, developed duelling pistols into a specialised design with distinct external hexagonal barrels, a spur on the trigger guard and the grip shaped for a better fit and balance. Matched pairs could be purchased in elaborate cases with all the necessary accoutrements. Today, these pistols are highly collectable items to weapon enthusiasts and fetch good prices for individual weapons, while cased sets are high value. Mostly there is no proof attached to these weapons to say if they were ever used for the purpose for which they were intended. It’s usually the design and gunsmith’s name which makes them appealing to put in a collection. Unfortunately, the weapons used by Wellington and Winchilsea are believed to have disappeared as there is no known trace of them and the maker’s name is not recorded.

As a historical fact, duelling is something which re-enactment groups depicting the Regency period have sometimes staged for the interest of visitors. Several members of a group will gather to recreate the duel, going through the whole process of loading the weapons, pacing out the distance and giving the order to fire. It’s a colourful, if deadly, part of history and visitors find the whole thing fascinating.

The most incredible part of it is that the pages of history record so many influential figures, including American presidents, who fought duels.