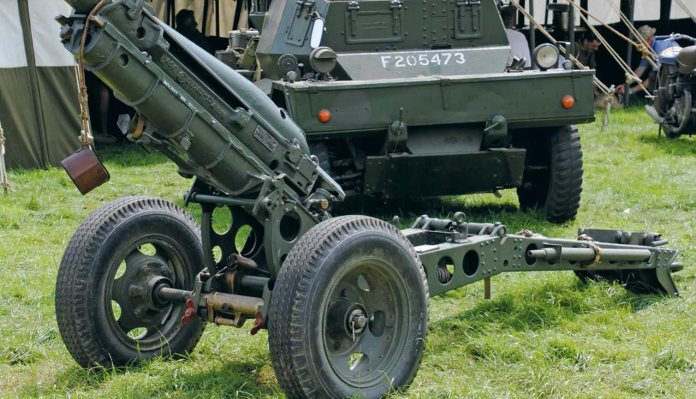 Armies frequently learn lessons from war that they can apply to later conflicts in which they become involved. America entered WWI in April 1917, but in the just over 18 months in which it was engaged, the American army learned several important things, especially concerning weaponry. For example, they adopted the French 75mm field gun and decided to keep it in service after the war.

Then, in 1920 the Westervelt Board, a postwar study report, concluded that an Americandesigned weapon of the same calibre should be developed. It was suggested that is should be a howitzer-type that could be broken down into manageable loads, making it a pack howitzer, so that it could be transported by pack animals and deployed anywhere to provide support for the infantry. Being a howitzer with an angle of elevation between -5º and +45º, the design could be used to fire indirectly in mountainous regions or directly at targets such as bunkers or tanks.

The first weapons were available in 1927 and were known as the 75mm Pack Howitzer M1, later becoming the M1A1. With a combat weight of 1,269lbs, the weapon could be dismantled into six loads capable of being carried by horses or mules. It was a compact design that measured only 13ft in length, around 4ft in width and just 3ft in height. However, there was no sense of urgency when it came to production and by 1933 just 32 weapons had been produced. Even by 1940, only a further 60 units had been delivered. By the end of the war in 1945, some 8,000 had been produced by Rock Island Arsenal in Illinois. They were used by US forces in all theatres of war and supplied to British forces, especially the airborne units.

By 1941, when America entered the war, the howitzer had been changed by mounting it onto the M8 carriage, fitted with pneumatic tyres, which increased its combat weight to 1,439lbs. It could still be broken down into loads but most often it was towed, assembled ready for use. Another version was developed, known as the M1A1 mounted on the M3A3 carriage with a split trail, however, the combat weight increased to 2,224lbs and it was not capable of being broken down in pack loads. Apart from that, the overall specifications remained unchanged and the weapon could be towed by a Jeep or any other vehicle, such as the Dodge WC 52 weapon carrier.

The howitzer was fitted with a horizontal sliding breech block and a hydro-pneumatic recoil system and was served by a crew of six. The ammunition was of the ‘fixed’ type and all, except for the anti-tank round, had a maximum range of 5.5 miles. A rate of fire up to six rounds per minute could be achieved but often it would be slower when engaging selected targets. Six types of ammunition were developed for the M1 howitzer, all of which (except one) had a muzzle velocity of 1,250 FPS. Two types were HE, the M48 and the M41A1, the projectiles of which contained 1.49lbs and 1.10lbs of TNT filling respectively. Two types of smoke rounds were available, the WP M64 and the FS M64.

The anti-tank ammunition was designated as the M66 High Explosive Anti-Tank-Tracer (HEAT-T). It weighed 16.29lbs with a projectile weight of 13lbs and produced a muzzle velocity of 1,000 FPS.

According to the manual, this type of ammunition had a maximum range of 7,000 yards but it would have been used at much closer ranges when engaging moving tanks. The M66 could penetrate between 80 and 100mm of armour depending on the range.

The H M64 type of ammunition was a chemical round containing mustard gas but this was never used. Three further types were developed for training purposes. The M2A2 and M19 were drill rounds, while the M337A2 fired a blank charge. Inert examples of all these types are of interest to collectors who purchase them at militaria fairs to build up a display. Re-enactment groups can use these items in a static display at shows or even replicas which can be purchased from specialist websites online.

The combat service of the M1 howitzer is impressive and it saw action in Italy, North-West Europe and during the ‘island hopping’ campaign across the Pacific, where the US Marines valued the weapon for its powerful punch. In fact, they gave the howitzer its nickname of ‘Little Dynamite’ because of its usefulness against bunkers and hard targets, including tanks. For example, when the US Marines were engaged in the capture of the tiny island of Betio between the 20th and 23rd of November 1943, they fired over 2,300 rounds in four days of fierce fighting. They also used the M1 on Tarawa, Saipan and a dozen other islands, including Iwo Jima, where LVT (A) 4 tracked amphibious vehicles fitted with 75mm barrels in turrets supported the troops.

In the campaign in the jungles of the Far East, the M1 was transported broken down into packs for mules to carry along the trails. The American unit known as Merrill’s Marauders fighting in Burma had two howitzers, which they nicknamed ‘The Fatboys’.

In European operations, the weapon could be broken down into nine loads for transportation by aircraft and delivered either by parachute or by gliders, such as the CG-4 Waco. Airborne forces such as those involved during ‘Operation Market Garden’ in September 1944, used howitzers delivered by Hamilcar gliders and towed them with Jeeps once they landed. The crews and ammunition were also carried in Jeeps, which could move rapidly to deployment areas.

The weapon was versatile and trials were conducted to fit M1 barrels into turrets mounted on vehicles such as the LVT (A) 4 and the M5 Stuart light tank, a combination which became designated the M8 with some 1,778 being produced. Both these types are seen briefly in the excellent mini-series, The Pacific. The US Marines used LVT (A) 4 vehicles with the M1 howitzer during their landings on Iwo Jima in February 1945 and also formed artillery units around the M1, with three battalions each with 12 howitzers to provide specific fire support. Another vehicle to have the howitzer mounted for mobility was the M3 half-track, which became known as the T30 Howitzer Motor Carriage, with some 500 versions being built.

Whilst the weapon and its ammunition are of interest to collectors and enthusiasts, it is still in service in some parts of the world. Its post-war service saw it being used in conflicts such as the Korean War and Vietnam, plus many other smaller conflicts. During WWII, Britain was supplied with around 826 under the Lend-Lease programme and China received over 760. In all, some 17 countries used the M1 howitzer, including Brazil, France and Turkey. In 1962 it was re-designated as the M116 and still remains in service.

Today, examples of these weapons can be seen on display in military museums, such as the Airborne Museum in Duxford. Plus, re-enactment groups, usually depicting British Airborne units at Arnhem, include them in their displays. At these shows, they are sometimes hitched up to Jeeps and towed in arena mobility displays or used in battle reenactment scenarios, where they look very impressive. Some groups position the howitzers in wooded areas and create a realistic setting to depict a scene in WWII, which delights modellers seeking ideas for dioramas. The history of this weapon already spans over 90 years and interest in it does not show any sign of fading.