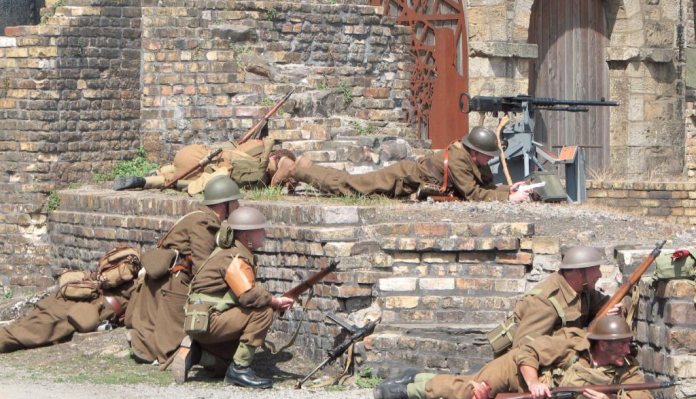 Re-enactors enjoy bringing history to life with their presentations and the involvement in battle re-enactment, the action side of things, is where several groups or more can combine resources to produce an event which stands as a memorial in tribute to those who took part in the event for real. These special events commemorate anniversaries, such as the bicentenary of the Battle of Waterloo in 2015 and the 600th anniversary of Agincourt in the same year.

Even more recent events are commemorated by re-enactment groups and because this year marks the 80th anniversary of the Dunkirk Campaign and the evacuation of the Allies from France, codenamed ‘Operation Overlord, it is only fitting we at Gun Mart look at how re-enactment groups have depicted this episode from WWII. Many books and documentaries have been produced on the subject of the Dunkirk Evacuation and it has also been used as the backdrop to a raft of historical dramas. Eighty years ago it was a defining moment for Britain because it signalled the country’s defiance against Hitler.

In May 1940 the Second World War was in its eighth month and there had been no military activity of any consequence. People began referring this as the ‘Phoney War’. In France it was called the ‘Drole de guerre’ (Funny War) and in Germany it was being called ‘Sitzkrieg’ (Sitting War), because nothing was happening. Then, at 04.30am on 10 May 1940, quite literally, ‘all hell broke loose’ as the full weight of the German army was launched westwards against Holland, Belgium, France and the British Expeditionary Force, BEF, which had been in France since September 1939.

The Dunkirk Campaign is a favourite subject for groups to produce displays, either static or animated, especially if they are depicting a regiment which was involved. Due to the scale of the operation, displays to depict what happened have to be produced on a much reduced level. Usually these are set on the beach and seen from the perspective of the British army. With judicious use of items, it is surprising what groups can achieve with even a very limited space.

The image most of us have of the campaign is of roads littered with abandoned vehicles and jettisoned military equipment. This can be recreated by a group in a small space just by spreading out items on the ground, such as water bottles, helmets, bits of uniforms and the occasional discarded weapon. It is achieved by using items collected by several members and scattering the kit in a line, as though it has been thrown down. If the group should be fortunate enough to have a vehicle, then that can be incorporated into the display for added realism.

As for the soldiers themselves, there are different ways they can demonstrate the fatigue the soldiers suffered as they struggled to the evacuation beaches. Simply having buttons undone and not shaving produces the image of having gone through a rough time. The roads were crowded with civilian refugees and this is an opportunity to include them into a display, with bicycles, prams and small carts. There are some excellent re-enactment groups depicting French and Belgian army units and when they are involved in an event they make the scene look like film footage from newsreels of the time.

Obviously, it is impossible to involve the Royal Navy with a Dunkirk re-enactment display when it is held in a field, but they are not forgotten as references are made to the ships evacuating the troops. The RAF can be involved as ground crew being evacuated along with troops and their vehicles which had to be abandoned. Often with nothing more than the uniforms they stood in, the RAF had to be got away along with everyone else. Defensive positions can be created as a reminder of the rearguard holding back the Germans as the troops were gathered off the beaches. These depictions can be a machine gun with either a fallen tree trunk or sandbags as protection.

The Germans involved in Dunkirk memorial events can use motorbikes and vehicles such as Kubelwagens, along with the usual display of weaponry, including rifles and machine guns. Much of the equipment used in such displays can be obtained from companies specialising in reproduction kit from helmets to complete uniforms.

Many of the officers taking part in the Dunkirk campaign would go on to become famous names later in the war, such as Montgomery, Rommel, Guderian, so to see their depictions would not be out of place.

There were many incidents during the campaign, not all of which can be depicted at re-enactment events, and so only an example can be shown. For example, the winning of the Victoria Cross by Corporal Harry Nicholls, Grenadier Guards, on 21 May, could be depicted as a set action re-enactment, but the incident of Major John ‘Mad Jack’ Churchill of the Manchester Regiment using a longbow to kill a German might be stretching things a bit too far.

Following the German attack on 10 May, the evacuation of troops from Dunkirk officially started on 27 May and by 4 June, when the evacuation ended, over 338,000 men, British, French, Belgian and some Poles, had been rescued. The routes leading to Dunkirk along which many units marched are today marked with memorials in tribute to their bravery. Some locations are less well-known, such as the bunker just off the D916 road heading north from Cassell. It was here on 27 May that Lieutenant Roy Creswell and 13 men of 2nd Glosters held out for three days before being forced to surrender.

Some of the locations are sad reminders of events, such as the massacre of the men from the Royal Warwicks at Wormhout. Likewise, the Duriez Farm and Louis Creton’s Farm at La Paradis, where 97 men of the Royal Norfolks were executed on 27 May, has to be tracked down. There are memorials at both sites in tribute to the tragic events which occurred at the locations.

Here in the UK there are reminders of the Dunkirk Evacuation, such as the Association of Dunkirk Little Ships which list the survivors of the more than 850 privatelyowned vessels which helped rescue the troops from the beaches. The Association has a website at: adls.org.uk It was organising a return trip to commemorate the 80th anniversary of Operation Dynamo, but at the time of writing it had been cancelled due to the Coronavirus. The 69 ème Régiment d’Infanterie is a UK-based re-enactment group depicting French troops of both world wars and they were planning an 80th anniversary visit to Dunkirk, also. Given the conditions at present, it is unlikely this will happen. The website for the group is at: 69eme.net.

The site of Dover Castle, overlooking the harbour, with clear views to the coast of France on a good day, was used by Vice Admiral Bertram Ramsey as his Operational Headquarters from where he directed the evacuation of the BEF. His operations room, lying deep within a series of tunnels dug into the chalk has been restored and recreated as it would have looked during 1940. This would have been a hive of activity and walking out onto the balcony he could have surveyed the scene as it unfolded.

Remembering events like this and commemorating them with special re-enactments to recreate part of the operation is what re-enacting history is all about. That, along with all the memorials both here in the UK and across France and Belgium, will ensure the heroism of all those men so long ago will never be forgotten.