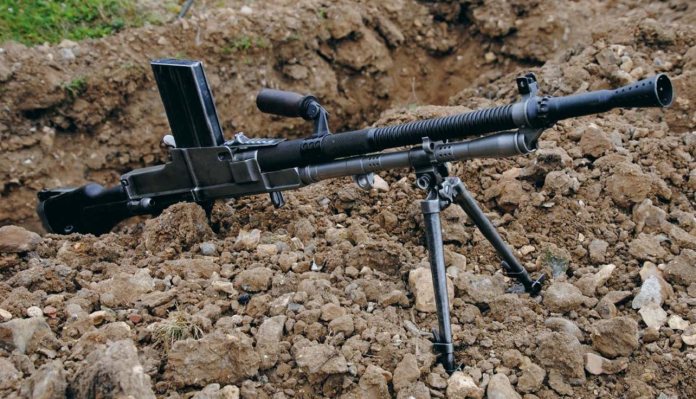 When Germany began its re-armament programme from 1933 onwards, it began by replacing those weapons which had been forbidden under the terms of the 1919 Treaty of Versailles. The size of the army increased and it found itself being issued with newly designed weapons which included anti-tank and anti-aircraft guns, mortars and modern machine guns in the shape of the MG34. This would later be joined by the MG42 in 1942 and both these weapons are today of interest to collectors. Apart from these two weapons, the German army used many more types of machine guns than might be realised.

As the war progressed and the German army expanded, it began to get spread out over a vast area of occupied territories. This meant that there was a problem when it came to supplying enough weapons to equip this force. The simplest solution was to use those weapons captured from the Dutch, French, Belgian and Polish armies which surrendered in 1939-1940. Added to this were the stocks left behind by the British after Dunkirk in 1940, and the Russian weapons after 1941. These were often non-standard German army calibres, but millions of rounds of ammunition had also been captured which allowed these ‘foreign’ weapons to be used.

The German army showed it was not averse to using these captured weapons in static defensive positions or for arming volunteer forces serving in occupied territories. It seemed the logical thing to do, but to the logistics branch, which had to deliver the right calibre to the right unit, it was a nightmare task. Nevertheless, that did not prevent the use of machine guns such as the British Bren Gun, the French Model 1924/1929D and the Czechoslovakianproduced ZB-vz26 and AB-37.

For example, over 1,700 FT- 17 tanks were captured from the French in 1940, giving the Germans access to hundreds of 8mm calibre Hotchkiss machine guns that were ready to use. Many tank turrets were removed intact and emplaced in static defensive positions for use as armoured machine gun posts along the Atlantic Wall, including the Channel Islands. The French Modèle 24/29 magazinefed light machine gun was designated as either the Leichtes Maschinengewehr 115(f) or the 116(f) and hundreds of these were also used in static defences.

The German army also benefited in many ways from the amount of material, equipment and weapons abandoned by the British army in the aftermath of the Dunkirk evacuation. It is estimated that of the 30,000 Bren Guns used in France, the British lost some 28,000 weapons. These were either destroyed, lost or discarded which, together with millions of rounds of ammunition, presented the Germans with a veritable ‘treasure trove’. Indeed, the Bren Guns were greatly valued and used in various roles, being given the service term ‘Leichtes Maschinengewehr 138(e).

Captured examples of the British Vickers machine gun were termed Schweres Maschinengewehr 230(e) and other seized pieces of equipment were given similar designations. The Germans also used Czechoslovakian ZGB vz33 machine guns and Danishmanufactured, Madsen Let Maskingevaer magazine-fed light machine guns. The latter had a cyclic rate of fire of around 450 rounds per minute, weighed 20 lbs and although it had been used in WWI and prone to stoppages, it was still useful. The list of captured weapons went on to include Polish, Greek, Belgian and, later in the war when Italy capitulated, Breda machine guns.

The history of these weapons makes them of interest to collectors, who can include them as extensions of the types of firearms used by the German army. They can also show the types Germany supplied to their allies such as Hungary, Bulgaria and Romania. Some collectors will display an exhibition of these weapons at an event to show how diverse the German arsenal was. Examples of these weapons can be obtained either at militaria fairs or from dealers such as Lingfieldbased D&B Militaria in Surrey (www.dandbmilitaria.com).

Examples of these ‘foreign’ weapons used by the German army and its allies can be seen in museums, but the association is not always explained in the caption notices. This may be a minor point of detail to some people, but to weapon enthusiasts, it makes all the difference. That is where reenactment groups fill the gaps with their static displays, which become outdoor museum exhibitions, with them acting as curators and guides to answer questions.

The Czechoslovakian ZB 53 was a belt-fed, air-cooled machine gun firing a 7.92mm cartridge, which was the standard calibre of the German army. The British army also used it in the same configuration but called it the Besa, plus used it as a tank-mounted weapon. The Germans used the ZB 53 in the sustained fire role, mounting it on a tripod. This machine gun weighed 41lbs and was capable of firing up to 700 rounds per minute using belts of 100 rounds. It was a useful weapon but its weight made it best suited to static positions or as a vehicle-mounted gun.

These non-standard types were often issued to volunteer units from occupied territories, including the so-called ‘Ost Battalions’ formed by Russian volunteers. The effectiveness of these units varied greatly from unreliable to those which acquitted themselves well in battle. Some of these units would have been issued with captured examples of Russian machine guns, with which they would have been familiar, such as the PM1910 Maxim and the DP-27/DP-28 light machine guns. These weapons were known respectively by their German terms as the Schwere Maschinengewehr 216(r) and Leichtes Maschinengewehr 120(r). They would have also used the Russian version of the Lewis gun known as the Leichtes Maschinengewehr 122(r), a remnant left over from WWI.

Re-enactors will either construct some kind of sandbag position for realism to display the weapons in place or, in the case of the ZB53, show them mounted on tripods in the open. By 1944 the war was going against Germany, with the Russians and Allies pressing in from the east and west. To bolster the defences, the Volkssturm, a form of home defence unit, was created and had to be equipped and armed. The men in these units received rifles and hand grenades, but in desperation, they were issued vintage machine guns from the First World War, which were virtually museum pieces. The list included the Maschinengewehr 08/15, so such ‘oddities’ do not look out of place because the move is well recorded.

In such a last-ditch situation, there was not always the correct calibre of ammunition available for these weapons. As the end neared by late April 1945, with the fighting continuing into the heart of the city of Berlin, there was often no ammunition at all. Such displays of the diverse range of machine guns used by the German army show the desperate lengths they went to, which in the end did nothing but prolong the inevitable outcome. For that reason, these displays are very interesting and informative as items of interest to enthusiasts and collectors.