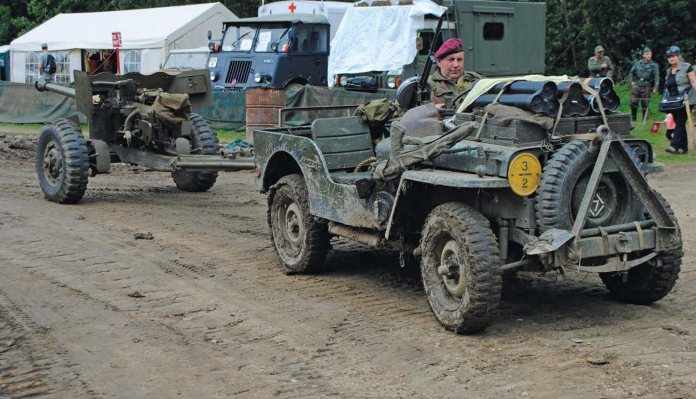 As early as 1938, the British army realised its existing 2-Pounder anti-tank gun would not be sufficiently powerful enough to destroy the new generation of tanks emerging, which it might one day have to engage in battle. It was decided for that reason to develop a more powerful anti-tank gun in readiness for that eventuality. It was agreed that a projectile weighing 6-Pounds would be up to the task and although approved, nothing further was done to develop the new gun. Then, in November 1939, two months after the outbreak of war, pilot models of the new 6-Pounder gun were ordered.

In June 1940, the shortcomings of the army’s anti-tank capabilities during the Dunkirk Campaign led to the development programme of the 6-Pounder being given importance. Firing trials with pilot models of the new gun - designated the Mk.1 - were successfully concluded, leading to an initial order for some 40 weapons. This was later increased to 400 by the Ministry of Supply, but even then, production of the gun did not get properly started until November that year. Factories had to re-tool and following a slow start, some 1,500 guns were produced in April 1942.

The calibre of the 6-Pounder was 57mm and the actual weight of the complete armour-piercing (AP) round it fired was 6.25 pounds. Ranges out to over 9,800 yards were possible and muzzle velocities of 2,950 FPS were recorded. The performance of the projectiles varied according to the range and the angle at which they struck the target. For example, at an impact angle of 30°, the AP shot could penetrate 79mm of armour at a range of 550 yards. At ranges of 800 yards penetration of armour was in the order of 72mm, whilst at the long range of 1,600 yards, the AP shot could penetrate some 50mm of armour.

The specifications of the 6-Pounder varied according to the version, but the MkII measured 15 ft 6 in long, 5 ft 11 in wide and 4 ft 2 in high. It weighed 2,520 lbs, was operated by a crew of six and could be towed into action behind a Jeep, delivered by parachute or even flown in by glider. It served in all theatres of the war, was used by Commonwealth armies and, in a rare move, was also used by the Americans who termed it the 57mm M1 Gun, deploying it to Europe during the Normandy Campaign. It proved a good weapon and just one example of how effective it could be was demonstrated by the 2nd Battalion the Rifle Brigade, which destroyed 37 enemy tanks in the opening battles of El Alamein.

The gun was a versatile weapon, with versions being fitted to tanks, such as the Churchill, whilst other versions of the gun were mounted on the rear flatbed of an armoured chassis to produce a combination known as the ‘Deacon’. The 6-Pound Gun, complete on its two-wheeled carriage, could also be mounted on the rear cargo bed of a truck in a method known as ‘Portee’. This method was used in North Africa to move it quickly over long distances and in an emergency, it could be fired from the vehicle.

In post-war years it remained in service with several overseas armies, including Spain, Brazil, India, Israel and Pakistan. The British Army continued to use it in post-war conflicts such as the Korean War and the Suez Crisis in 1956. The 6-Pounder was declared obsolete with the British Army in July 1960 and other armies followed suit at intervals.

Today, examples occasionally come up for sale on specialist websites. The prices vary according to condition, but if a 6-Pound AT Gun is what a group wants to complete their display then a price can be negotiated. If an original example is outside the budget then there are very realistic-looking replica versions available. They look very good and fit in with static displays to show examples of weaponry.

Blank firing versions of original are also available, these cost more, but they do allow groups the opportunity to take part in arena displays and fire it in action. In static displays, the 6-Pounder can be positioned to demonstrate any theatre where it served and groups paint their guns in the correct colour scheme to match the campaign, such as North Africa or Europe. Adding a vehicle turns it into a complete exhibition item.

Collectors interested in ammunition have different categories within their range of acquisitions from the small calibres up to the larger calibres, including anti-tank guns. The different types of ammunition fired by the AT Gun are important to these collectors, who may like to include an example of each type to show the development of the projectiles during the war. Re-enactors are also collectors and they use examples of the ammunition as part of their displays for realism. If the original ammunition box is available, that is added to the display.

Examples of the gun can be seen in museums, such as the Royal Armouries site of Fort Nelson at Fareham, just outside Portsmouth in Hampshire, where the 6-Pounder is sometimes fired in displays of historical artillery. At a recent Tankfest Show held by The Tank Museum in Dorset, a group taking part in the event displayed their AT Gun and used life-size manikins as props to represent the crew. Included were inert rounds of ammunition and a rare wooden example used for training purposes.

One person who owns an example of the weapon is James Shopland, as part of the Shopland Collection of historical vehicles and weapons. Based in Somerset, James established the ‘Dig for Victory Show’ in Somerset (www. digforvictoryshow.com) where he has displayed the 6-Pound AT mounted on an Austin K5 truck (the Portee role) where it attracted a lot of attention. Re-enactment groups depicting either specialist anti-tank units or recreating a particular scenario will incorporate the gun into the display. Where mobility displays are part of the presentation, vehicles such as Jeeps and ‘Bren Gun’ carriers will parade towing a 6-Pound AT Gun

Groups create scenarios showing battle-damaged buildings and ‘gun pits’ on the edge of woodlands into which they place a 6-Pounder to depict a scene from a campaign such as Normandy, Arnhem or the Battle of the Bulge. It was on the 20th September 1944 that Lance Sergeant John Baskeyfield of the South Staffordshire Regiment won a Victoria Cross for his actions with an Anti-Tank Gun at Arnhem.

Each re-enactment scenario is different, such as the position near trees where the gun can be draped in a camouflage net to create an authentic-looking setting. The weapon is sufficiently versatile as a display item that it allows groups to recreate post war scenarios such as the Korean War. Its use with other armies allows for several other display possibilities, including the Arab-Israeli War, Indo-Pakistan War or just as an exhibition of equipment used by various armies in the post-war world.

Military shows attract people with an interest in military history, including modellers who create dioramas with a military theme. Visiting these shows provides inspiration for ideas and also serves as reference points when constructing their models. So, as far as the 6-Pound AT Gun goes, it is an all-round weapon of interest to a wide range of people from collectors to modellers and reenactors themselves. That is what you call having great versatility.