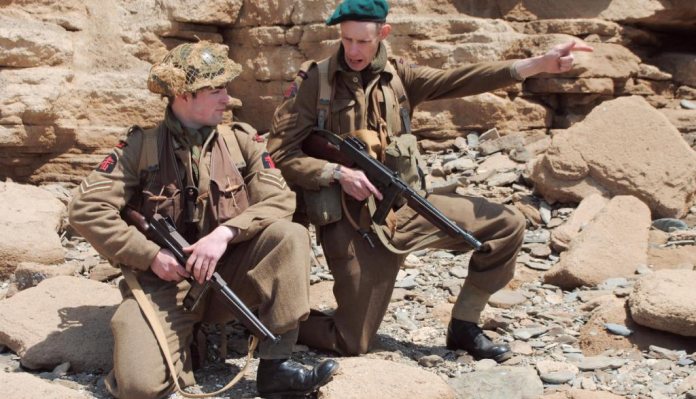 One of the most popular of film genres is the war movie, especially the type which are based on true events, such as ‘The Longest Day’, ‘A Bridge too Far’ and ‘The Great Escape’. Even those which have a fabricated storyline are popular, such as ‘Went the Day Well?’, are very good in their own right. War films don’t have to be based on events of WWII to prove popular, other conflicts are also enjoyed by audiences, such as ‘Zulu’, depicting an epic moment from the Victorian army, and ‘Paths of Glory’ starring Kirk Douglas and set during WWI. A very long list could be drawn up to include many more diverse titles, such as ‘Waterloo’ and ‘Charge of the Light Brigade’.

Regular readers of the re-enactment column will know that I have often drawn comparisons between displays at events and film productions. Such a reaction is only to be expected, because when you see something which reminds you of a scene from a film you realise the group presenting the display has done an excellent job with its preparations. They may not have set out with that intention in mind, but the effect makes a connection causing visitors to stop, take in more detail and speak to the re-enactors.

Some truly spectacular war films have become classics, such as ‘Sea of Sand’ and ‘Ice Cold in Alex’, both of which are fictional storylines set against a backdrop of real events, making it possible to believe they could have happened. Another classic is ‘Dunkirk’, released in 1958 and starring John Mills, which has a storyline set against a backdrop of real events. John Mills starred in many war films and I discovered he served in the army during the war, enlisting in the Royal Engineers September 1939, holding the rank of Lieutenant, until he was discharged in 1942 due to ill health. This experience gave him useful knowledge and made him ideal for the roles he played. This set me to thinking how many other actors had served in the forces during WWII before embarking on a film career and how it affected their performances, especially when starring in war films. In many ways it possible to compare their film performances to the displays seen at re-enactment events.

Some war films were made during the war itself, such as ‘Went the Day Well’, released in 1942, which was a very jingoistic production, but helped bolster morale. A similar film was ‘The Way Ahead’ released in 1944, staring David Niven and Peter Ustinov, both of whom served in the army and went on to star in more war films such as ‘The Guns of Navarone’ released in 1961. It is not just the cast which makes a film, the location is also important. For example, Went the Day Well? was filmed in the Buckinghamshire village of Turville, which could have been any village. Today the village looks almost as it did 78 years ago, making it the ideal setting for other productions, including ‘Goodnight Mr Tom’ which has a storyline about evacuees during WWII.

During the war the area known as Saunton Sands in Devon, with its vast stretches of uninterrupted sand dunes and beaches, made the perfect training area for the US Army to practice amphibious landings in preparation for D-Day. Later, it was used as one of the locations for the film ‘Matter of Life and Death’, released in 1946. Since then it has been used in various productions, with the beaches representing the amphibious landings at Anzio and Normandy for D-Day. It is also sometimes still used by the military for training exercises. Because of its historic connections the location has become a popular destination where military vehicle owners end their organised road runs and re-enactors also turn up in support of such events. These turnouts are popular with locals and visitors alike and always attract a lot of interest.

The Mapledurham Estate in Oxfordshire is an out of the way, quiet location with unspoilt red brick and flint buildings with access to the River Thames, making it the perfect setting for film productions and re-enactment events and battles involving vehicles. Although never used by the military during the war, the site is best known for serving as the fictional village of ‘Studley Constable’ in the film ‘The Eagle has Landed’, starring Michael Caine, and has gone on to become a modern classic. The watermill featured in the film is a real, working building around which battle re-enactments have been recreated. Michael Cain was a National Service soldier, serving in the Royal Fusiliers between 1952 and 1954 and seeing action in the Korean War.

During his film career Michael Caine has been able to put his military experience to good use in several of his films, including his first starring role in a production called ‘A Hill in Korea’, released in 1956 and for which he also gave some technical advice. The list of films which have inspired re-enactors goes on and many more examples could be mentioned, such as Band of Brothers, with Hatfield Aerodrome, a wartime airfield, standing in for Upottery airfield in Devon from where the 101st Airborne Division departed for Normandy in 1944. Connections between wartime use and places where re-enactment events are held include castles, railway stations and isolated places all over the country.

The list of men and women who served their country during the war and later went on to become actors is just as impressive as the list of locations where events are now held. For example, the late Richard Todd served as a lieutenant with the 7th Battalion Parachute Regiment of the 6th Airborne Division, which secured the bridge of the Caen canal on the night 5/6 June 1944 ahead of the beach landings at Normandy. Eighteen years later, in 1962, he recreated the event when he appeared in the film The Longest Day, re-enacting the part of Major John Howard. Indeed, Richard Todd referred to his roles in war films as re-enactment, especially the ‘Dam Busters’ in which he portrays Guy Gibson of No617 Squadron. If you think about it, the difference between actors and re-enactors is the prefix ‘re-’ which separates the two.

Other famous actors who served during WWII include Harry Andrews, who served in the Royal Artillery, and Anthony Quayle, who was attached to the SOE, and both of whom starred in Ice Cold in Alex, a fictionalised story set against backdrop of Tobruk. David Niven served in the army and went on to make several war films, including The Sea Wolves. The late Richard Attenborough probably understood the war film genre better than anyone else. He served in the RAF during the war and his film career saw him on both sides of the camera. As an actor he starred in classics such as Sea of Sand, Dunkirk and The Great Escape, whilst as a director he produced A Bridge Too Far and ‘Oh! What a Lovely War’ set against the First World War.

There were many American actors who served in WWII, such as Clarke Gable and James Stewart, both in the USAAF, as too did Alan Ladd, all of whom later went on to star in war films. Other American actors to appear in war films having served in the military include Kirk Douglas, US Navy. Robert Ryan served in the US Marine Corps as did Lee Marvin who landed on Saipan where he was wounded. Like their British counterparts, such experience prepared them to re-enact their many roles in wars films.

In a roundabout turn, re-enactors have starred in many films appearing as extras in productions such as ‘Saving Private Ryan’ and Band of Brothers. Acting the part at re-enactment events is very serious and by being good in these depictions it can lead to being offered work in films. So, if somebody says they want to put you in the movies, especially a war film or historical drama, they are serious and have been impressed by your appearance and your talents.