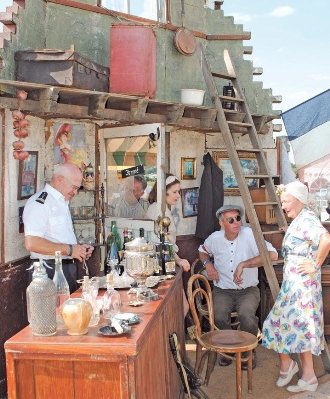 With so much military hardware stretching out in all directions across the site at W&PR, it is clear that many surprises will be encountered.

Strollers wandering around dressed in all manner of uniforms looked amazing, and their high standard of turnout made people turn their heads for another look.

Even a simple image of a young girl in blue overalls sitting under the wing of a Spitfire was an ideal ‘photo opportunity’. With her tool kit and mug of tea she looked very much a member of the Women’s Auxiliary Air Force. The WAAF was formed in June 1939 and in 1943 it had 180,000 women from all backgrounds. Only her cap badge was wrong, being RAF rather than WAAF, but apart from that rather minor point, which could have been corrected with a quick trip to the traders’ stalls nearby, the display was very good and fitted in with the fact that the site now used by W&PR was an operational site known as RAF Westenhanger during the war.

A limited amount of ‘digging in’ is appearing, which adds another dimension to the displays and allows groups to expand on their presentations. For example, my old friends of the Second Battle Group had prepared their display complete with gun pits and looked like it could have been ‘somewhere in France’. The preparation allowed for the group’s leFH18/40 10.5cm howitzer to be positioned ready for firing.

A crew for the 7.5cm PaK40 anti-tank gun was also mustered to show how deadly such weapons were against tanks when well sited.

It was here that I learned something about the vehicle convoy system of the German Army. I noticed the sign ‘Abstand 100m’ on the rear of the Steyr truck used by the SBG and I asked Peter Mooney what it meant. He explained that it was the distance that had to be kept between vehicles when in convoy. Apparently as the war progressed and Allied air power shot up, the gap between trucks on the road was increased to reduce the chance of being hit during strafing attacks. It is useful to learn such things and at W&PR groups welcome questions because it shows that people are interested. Heavy traffic

There is a lot of movement by vehicles as they make their way to or from the main arena. All this traffic is carefully regulated and marshals guide the trucks or tanks, which often resemble small convoys, to where they should be at a given time.

As I was making my way down one of the routes I heard an unusual sound of a vehicle approaching and I turned round to see what it was and I was confronted with a Citroen Kegresse as used by the French army until the 1940. The driver was in full uniform of the French army circa 1940 and I do not know whether I more surprised to see such a vehicle or if the driver was surprised that I recognised it. The Citroen Kegress half-track was used as a prime mover for field artillery by the French army and also to transport supplies.

After the surrender of France in 1940 the German army took these vehicles into service as prime movers for artillery and were known as the U304(f). Some were later used as troop carriers and ambulances and served mainly in France. W&PR has a reputation for being the place to see such rarities and no wonder that visitors descend on the show from across Europe and America.

By contrast there were jeep-type vehicles all across the site from the original Willys to those produced by Hotchkiss and Ford. Indeed it was one of these last types which stood out from the rest and turned out to be Ford GPW Script from 1942. What made this particular vehicle so different was the armoured shield fitted to protect the driver and machine gunner. I had seen photographs of such a vehicle in reference books, but here was an actual example which would have made any enthusiast’s day. Another unusual vehicle was a Model 2 Ford GTB-C M5 Bomb Truck which was used by the US Navy, army and USAAF to transfer bombs to aircraft. Its appearance was a credit to the owner who keeps it looking so good.

Rarities even turned up in the main display arena such as the Carden-Loyd machine gun carrier, sometimes referred to as a Tankette. I had last seen this at a previous W&P Show at the Hop Farm when it was being restored. Now, here it was on the move and giving a mobility display. Very compact with a low silhouette, this design of vehicle served with the British Army between the wars and was armed with a single Vickers machine gun. The vehicle was sold to the Indian army and even Canada and influenced a number of other designs, including the Universal ‘Bren Gun’ Carrier. The Carden-Loyd carrier was used to tow light anti-tank guns such as the 20mm Oerlikon and even trailers, but they were obsolete by the time of WW II. Seeing this example on the move was another rare treat for enthusiasts.

Just when you think there are no more surprises another one pops up. Over the tannoy speakers came the announcement that a Polish TKS Tankette was about to enter the arena for a mobility display and I thought I had not heard correctly. Surely there could not be any outside a museum in private hands. Coming through the dust and approaching at speed there was indeed a TKS Tankette which, again, I recognised from reference books. This was one of the vehicles whose design was influenced by the Carden-Loyd carrier and, like it, was armed with a single machine gun. The Polish army had developed a series of these vehicles which began to enter service in 1932. When Germany attacked in 1939 the Polish army deployed these light vehicles which proved no match for either the Panzer II or III tanks.

As it turned out the surprise was really on me because this was not an original. I was given permission to move closer to the vehicle after the display and it transpired the TKS was a perfect replica built by the Biuro Rekonstrukcyjno- Technlogiczne (www.br-tzip.pl) in Poland. The company used original plans to build the exact replica down to the rivets and bolts. Having seen what German tanks of the 1939 campaign were like, this small vehicle would not have stood a chance on the battlefield. Yet, we know, Polish troops did go into battle in these flimsy tankettes which were even cruder than the British Army’s Matilda Mk I of the same era.

After the mobility display, came the real action, with the battle re-enactment, complete with vehicles and artillery. As each side moved into position in preparation there was an air of anticipation. Moving tanks and other armoured vehicles takes time. Watching all this movement with only a few vehicles gives an idea of how complicated it was to organise an attack such as Operation Goodwood, the British Army’s attempt to break out of the Normandy beachhead 18th - 20th July 1944. For the attack some 1100 tanks were used along with two infantry divisions. It was a fierce battle in which the British lost almost a third of their armour and the Germans lost 100 tanks.

A burnt-out building had been erected to serve as a backdrop, and with the ground undulating with dips and small hillocks it could have been the outskirts of a French town. The Allied artillery opened fire and was joined by American mortars which prompted an attack by the Germans using their armoured vehicles, including replica StuG III assault guns. The armoured troop carriers moved forward with infantry and the two sides clashed in an intense fire-fight. A pair of M18 ‘Hellcat’ tank destroyers moved forward to provide covering fire to the US infantry using blank-firing .50 inch calibre machine guns. Gas guns were also used, which were good, but for those with experience of firearms their ears can tell the difference between the signature sounds of these two types of systems. The arena can be configured to a variety of battle scenarios and it will be interesting to see what other re-enactment battles will be fought over the ground at future W&PR Shows.

Many of the groups presented demonstrations on their own display areas, such as a barn and the burned-out French cafè complete with bar. This was being used by a small group of resistance fighters who were enthusiastic and eagerly anticipating Liberation by the Allies.

One interesting display was depicting a unit of the German army, but unfortunately there was no-one around to ask what was happening. The display was animated by chickens in a hand-woven cage, presumably as troops must have kept them on campaign in order to have fresh eggs. Poultry would have been taken from farms and so the scenario could have been France or Russia. Sometimes it can be the small things like this that make all the difference in creating an authentic effect.

Every group had worked incredibly hard to prepare their displays and each of them can be justifiably proud of what they achieved. New displays had been created and even the Home Front area had changed from last year. This is what keeps the show fresh and attracts visitors to return year after year.

The vehicles are the real stars of the show but the displays put on by the reenactment groups attract attention from enthusiasts and collectors of weapons.

The show has settled into its new location well and retained its appeal as a family attraction. For example, I met a young family who were on holiday in Kent visiting from Denmark and because their son liked tanks they dropped in to see the show. I saw them much later in the day and they gave it a firm ‘thumbs up’ for enjoyment and satisfaction. The traders’ stalls had very good quality items on sale and I added a few things to my own collection from the stands.

Time has to be taken if nothing is to be missed. Take the opportunity to grab the bargains when you see them otherwise you might miss them. The same with taking photographs of the vehicles or the re-enactment displays. Snap away because everything will be different next year with new displays.

On behalf of Gun Mart & Militaria Mart I extend our appreciation to Rex Cadman and his tireless team of assistants for making our visit so pleasurable. To all the re-enactment groups and vehicle owners many thanks for your time in allowing photographs to be taken.

W&PR will return next year between 22nd and 26th July 2015, with more anniversaries including 75th anniversary of Dunkirk, 70th anniversary of the end of WWII and the bicentenary of the Gurkhas serving the British Army. To keep up with developments please visit the official Website at: www. thewarandpeacerevival.co.uk