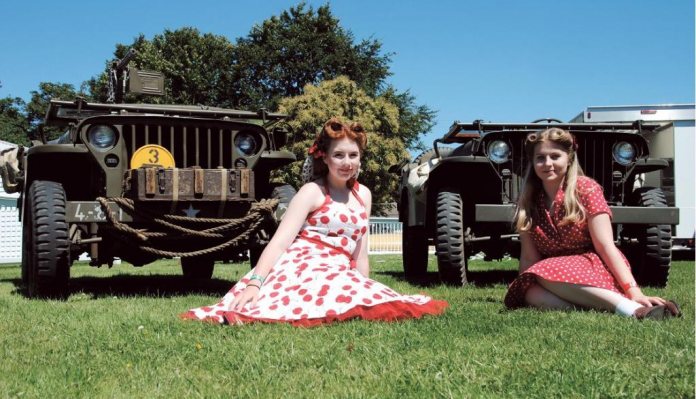 When the show, which today we know as the War & Peace Revival, was first created over 30-years ago as a vehicle rally, nobody could have envisaged the size it would grow to become. Nor could anybody have predicted the impact it would have on military enthusiasts around the world. Since then, the show has consistently managed to surprise people and it is that allure which draws people back year after year to become the regular visitors; and they are never disappointed.

This year’s W&PR was slightly different from previous shows, being held over the five-days between Tuesday 19th July and Saturday 23rd July. It was also the first time under the direction of the show’s new owner John Allison, whose team have spent a whole year of intense preparation and hard work putting it all together. There were some subtle changes, but the W&PR Show, like your favourite television programme, is still the same production, except with a new producer and some new and exciting storylines. There were some regulars who were conspicuous by their absence, for whatever reason, and all I can say to them is: you missed a great show.

The foundation is the same, with the show still providing the three key elements to meet the central interests, which are trade stands for militaria collectors, re-enactors with their static displays and finally the vehicles, which are the stars of the show. In addition, there are the ‘extras’, which increase the pleasure of visiting the show, such as the marquee displays, the model zone, the strollers who turn up unexpectedly wearing a range of uniforms and the battle reenactments in the arena with the vehicles and re-enactors.

The trade stands, as usual, were spread out across five main areas named after the five landing beaches at Normandy. These had a range of items catering for all levels of interest, from medals through to complete uniforms and even larger items. The vintage display area had its own set of trade stands to meet the demands of those interested in the fashion of the period. As the week progressed these areas became busier with collectors and more traders who were late arrivals.

Traffic management John Allison proved himself to be a man of his word and he has removed the coloured plastic marking tape and the unnecessary steel barriers. These have been replaced with sensible roped walkways, which provide visitors with an unimpeded viewing experience and guided them along the pedestrianised route through the displays. A separate inner route, dedicated to vehicle movement allows improved flow of traffic around the site and visitors were provided with a regular ‘land train’ service to transport them around, also.

The vehicles were arranged in displays according the vintage from wartime through to postwar years, parked in four main areas depending on period. By looking at the show programme an enthusiast could go direct to the location to see those vehicles which were of particular interest. There were ‘fill in’ displays provided by vintage agricultural machinery to remind visitors how food production was managed on farms over seventy years ago. A couple of the replica aircraft had been moved from the Battle of Britain display, including the Bf Me 109, which gave better opportunity to see them in their entirety. This meant that the RAF Display had more room to show off the replica Spitfire and Hurricane along with other items.

The Home Front display had all aspects of the war covered from Jude Knight presenting her demonstrations of wartime cookery with Ministry of Food and rationing, through to Kevin Drake with his Home Guard. The shop fronts of the period were much improved with better displays and interaction with re-enactors and the Fire Service obliged me with my first photoopportunity. They had all the equipment including a handoperated pump, hoses and water supply. With eagerness they set to pumping water and began squirting a building to illustrate the effectiveness of the equipment. They also explained how the fittings and equipment couplings were not standardised as today, but varied from one county fire brigade to another.

It took the war to make the service realise the importance of having equipment that was universally compatible. That was one historical fact I found out.

One of the buildings had been kitted out like a Home Guard office and with a couple of chaps the image was complete. Next, it was onto the RAF and they recreated the image of the legendary ‘legless’ pilot Douglas Bader, getting into his aircraft. It was based on a famous photograph showing him pulling his leg to get into his cockpit. The re-enactor who recreated it could not believe how difficult it was and marvelled at how Bader was able to manoeuvre himself into the tiny cockpit without muscles in his legs. Re-enactment certainly makes you think about such points.

Can You Dig It?

Making my way over to the re-enactment area I noticed how many groups were using trenches as part of their displays. Some of these had been prepared for them by a mechanical digger but the group called ‘Die Soldaten’ (The Soldiers), which, with a name like this, naturally depicts German soldiers, dug their trenches by hand using authentic tools. Speaking with members of this group I discovered that apart from British, they had Dutch friends joining them, along with others coming from Belgium and even Sweden. As I walked around the re-enactment displays I heard German being spoken and I was informed that a group had travelled from Lithuania. I later saw these driving around in a replica SdKfZ 247 armoured command car, which they had brought over with them. This demonstrated that W&PR still has its international appeal.

It was not just among the re-enactors that the international following came through, walking around the vehicles in Kitchener’s Field, Dannatt’s Field or Patton’s Field, there were vehicles to be seen from France, Belgium and several other countries. Size also mattered here, with large vehicles such as the armoured M26 ‘Dragon Wagon’ rubbing wheels with the much smaller Willys Jeeps and motorcycles. These all looked very impressive, but the quiet star of the show was a real authentic Sturmgeschutz III or ‘StuG III’ assault gun Ausf. D armed with a shortbarrelled 75mm gun. When I first saw it parked in the static line-up I believed it to be a replica built from two FV432 APCs. It was only when I was informed of its historical significance by a friend that I realised its importance.

As it turned out, I knew the owner, Jon Phillips otherwise known as ‘The Welderbeast’, and we had a chat about his latest restoration project. He explained that it is one of only three such types in the world and of these, his is the only version fully operational. As well as restoring it he has researched its history, which reveals more of its operational service. It served with the Sonderverband 288 in North Africa and was captured near Bir Hacheim in May 1942. Since then it has had a chequered history being largely abused. Jon has done a remarkable job of restoring it and kept the scars of battle damage as points of interest.

After that, nothing could beat such a chance encounter, and I returned to the re-enactment area. Some very good displays had been put up and the groups involved were enthusiastic as always. This applied from the largest groups, who also participated in battles in the arena, down to the smallest groups who put on static displays. The entire showground is a site you can walk around several times and always see something different each time. In fact, more re-enactors and vehicles were turning up all the time, as were traders, and their presence expanded the show.

It was interesting watching vehicle owners and those reenactment groups working on the servicing of the vehicles, which were part of their display. This maintenance is important to prevent breakdowns and keeps the show moving apace. On the Red Ball Express display, one member of the group was halfway up a crane painting the jib, just as it must have happened. At the display area of my old friends the Second Battle Group there was plenty of activity, but they still found time to fit in a photo-shoot. In my opinion there are few groups which can come anywhere near the SBG for levels of authenticity, and I am not alone in that opinion. They set up a sequence showing the loading and firing of the huge 120mm calibre mortar, just as though it were on the Russian Front circa 1943. In another part of the area, a couple of chaps were refuelling a motorcycle using an authentic ‘Jerry can’. Very simple and unstaged, yet it looked as though it were wartime newsreel footage.

Large displays are impressive but, as the old saying goes ‘less can be more’, and that can very often be the case. I was reminded of this when I saw a curious display which drew me towards it. It resembled the entrance to a tunnel representing the type of installation being discovered by Allied troops towards the end of the war. Then I saw the person responsible for its creation and I knew why it looked so good. Dan Butler, of the 29th Infantry Division, who had also built the displays used in the arena battles. Dan explained that he wanted to keep it simple but effective. It certainly worked and attracted a lot of attention.

Strollers is the term I use to describe re-enactors who turn up in uniform at a show but are not part of an overall group. W&PR attracts a lot of these and they are always great. Regular readers will know Titus who comes over from France and is always amazing. The first time I saw him he was dressed as a French General to commemorate the centenary of Verdun. Later in the week he was dressed as a member of the French Camel Corps in the Sahara. Indiana Jones turned up and standing next to a German tank looked every inch the part. A lovely lady dressed as a member of the Rockford Peaches women’s baseball team, as depicted in the 1992 film A League of Their Own starring Geena Davis. This girl looked incredible and added more than a touch of glamour. It would be great if she could form a women’s baseball team for real and set up a game. Now there’s a thought.

A spokesperson for the show said they had “Achieved our aim in the first year”. Everyone I spoke to said how much they enjoyed the show, had no complaints and will be back again next year. As for the visitors, a quick look at the number of vehicles in the new and improved car parking space showed how people voted with their feet by walking through the gate.

W&PR remains the Greatest Celebration of Military History and Vintage Lifestyle in the World with something for everybody. Where else could so much be seen all in one place? The date to put in your diaries for next year’s show is Tuesday 25th July to Saturday 29th July 2017.

We at Gun Mart are grateful to John and all his staff at W&PR for their hospitality and we look forward to seeing you all again next year. Congratulations all round on a magnificent show.