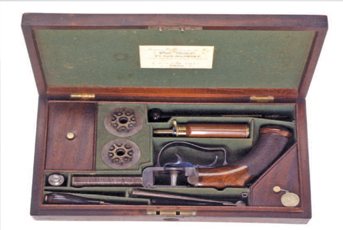 The Rock Island Auction Company, has grossed $14.5 million dollars in one firearms auction over one weekend. The legend of Samuel Colt was alive and well as Colt firearms accounted for 8 of the top 10 items sold during the weekend for an astonishing sum of $2,012,500. The talk of the sale was a breathtaking original and ultra rare Colt 16 inch “Buntline Special” Single Action Army Revolver with its original factory stock which sold for a World Record amount (lot 3228). The top ten lots of the sale are highlighted below.

This sale was comprised of four well known estate collections headlined by the world renowned Gateway Collection, the second part of which will be sold by Rock Island Auction Company on the weekend of November 30th, December 1st & 2nd.  For more information visit the RIAC website at www.rockislandauction.com.

This sale of Antique Arms & Armour was held Bonhams salesroom in Knightsbridge, London.  It was a well attended sale with over 330 lots on offer. Details of a selection of some of the many items which were successfully sold on the day are presented below, including a fine and rare cased 64-Bore Seven-Shot Percussion ‘Turret’ Revolver by James Wilkinson & Son, which sold for £40,850.