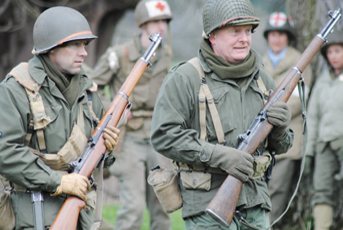 When I heard of a new event called ‘Mapledurham at War’ being held over the weekend of 30 and 31 March I decided to drop in and have a look. Although this was the first time such an event had been held at Mapledurham in South Oxfordshire, the setting itself has been used to recreate wartime Britain before when it was used as the backdrop to the 1976 movie ‘The Eagle Has Landed’, starring Michael Caine.

Mapledurham is an out of the way place but once on site it proved to be a worthwhile visit, with a comprehensive range of displays from static equipment to vehicles. In fact the location is so far off the ‘beaten track’ that it was not even used by the military during the war because the road system to the site was not considered adequate for the traffic.

Much of the site is instantly recognisable from the film but other aspects of the village had been temporary structures specially erected for the film. The large house, which served as the HQ for the US forces, is open to visit and the watermill is fully working and looking just as it does in the film. The houses including that used by the German spy Joanna Grey are private residences and St Margaret’s Church is just as one sees it in the film and is open to visit.  In the past I have compared some of my visits to re-enactment events as being like walking on to a film set because of the activity and attention to detail to get it really authentic, now here it was really the case.

In fact whilst looking at the location I had a moment of inspiration. I thought it would be great if it were possible to stage a recreation of some scenes from the film. Just then I noticed Polish Airborne troops wearing the kit as seen in the film. It turned out the troops were from the ‘Hampshire Rifle & Re-enactment Society’ (www.hampshireregiment.co.uk) and they had assembled the equipment to recreate Michael Caine’s German troops in Polish disguise.

The chaps were very co-operative and keen to get going on the recreation of scenes. The first set we decided to arrange was around the watermill. They took up positions both inside and outside the building and it all looked very atmospheric and just like being part of the film.

Next we moved to the churchyard but as re-enactors were not permitted inside the church whilst wearing their kit, the chaps took up position among the gravestones where the final battle is fought in the film. It really could not have worked out any better and the effect was amazing.

The various re-enactment groups had demonstrations and talks and weapons pits had been dug for machine guns. One group had set up a 60mm mortar in one of the pits and they went through the firing sequence. Their position covered a sweeping bend in the road and together with the .30 inch calibre Browning machine gun they would have made a perfect ambush position to catch any approaching enemy unaware in the flank. The group Das Reich had a PaK 36 3.7cm anti-tank gun which looked real but actually turned out to be a very passable replica.

Another replica anti-tank gun was an M3 37mm which discharged pyrotechnics using an electrical circuit. It had been built by a chap who introduced himself simply as Graham and was a member of the 514 Quartermaster Technical Company and part of the group which portrays the Red Ball Express. He had built it from steel using a 1/6th scale model as a reference and the pyrotechnic charges had a small amount of talcum powder to produce a smoke effect with flame. The replica was deployed for the battle and Graham told me that it was the first time the gun had been used in an event. Another of his creations used during the battle was a replica 2.36 inch M1 Bazooka shoulder-fired anti-tank rocket launcher. With weapons becoming expensive and difficult to obtain it makes sense for groups to produce their authentic-looking replicas.

The battle at Mapledurham was a European theatre setting and involved many of the groups on site including elements from the Second Battle Group supported by a replica SdKfz 222 which was armed with a gas-firing 2cm cannon. The action lasted for around 45 minutes which was quite a long time for a battle re-enactment and the fighting see-sawed back and forth across the field. There was a lot of space to use but the main action was played out very close to the crowds.

My visit was better than I could have hoped for. It was like opening a reference book of wartime weapons and checking off what was on display. Weapon handling drills with rifles, sub-machine guns, machine guns along with mortars and anti-tank guns is improving all the time showing that attention is being paid to training. Even those weapons which had been recreated, such as the bazooka and the blank-firing mortars, were properly handled and worth seeing in action. I have a feeling we are going to see more of these replica weapons in action at future events and perhaps even some rarities will make an appearance. On the Saturday the battle had an unusual twist in the tail and the Allies actually lost! As events go, this is one to watch and hopefully it will become as annual event.