Re-enactment for All Seasons 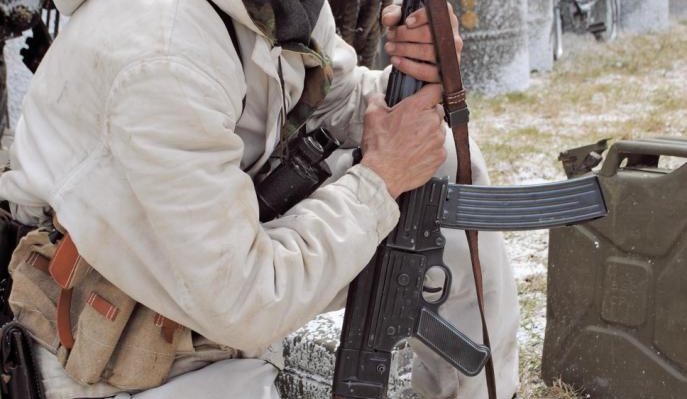 Most hobbies or pastimes have an accepted period during the year, when they are considered to be ‘in season’. This includes sports such as football and cricket, when those who enjoy it turn out either to watch or participate. That is the case with re-enactment, or, rather, it used to be.

There was a time when events used to be organised just for those months of warmer weather, so that members of the public could watch in comfort. If it rained, no one bothered and things carried on just the same.

Things change and so has re-enactment, with more events than ever before to fill the pages of diaries, so that now there is usually something happening somewhere.

Re-enactment is about recreating periods of history, which naturally includes battles. As any experienced re-enactor will tell you, battles did not happen just when the weather was fine. The pages of history are full of accounts that record the weather conditions at the time of a battle, which could often be dreadful.

For example, the Battle of Towton, fought on 29th March 1461, during the Wars of the Roses. Chroniclers wrote about a snow blizzard, so thick that it obscured the vision of the soldiers and blinded them. Each side deployed around 30,000 troops and after the fighting was over, the battlefield was littered with anything between 19,000 and 28,000 dead. Today, the Towton Battlefield Society (www.towton.org.uk) commemorates the battle and has a full programme of events throughout the year.

There are other groups, which also re-enact similar early periods of history and whilst they too take rain in their stride, if not too heavy, snow and sleet are different conditions and do prevent battle re-enactments on the grounds of safety. Besides which, nobody would be able to see the event.

It is this preparedness to continue despite weather conditions that sets re-enactment apart from other physical activities. The occasional summer storm does not prevent large events such as Military Odyssey and War & Peace Revival from continuing and the reenactors quite literally ‘campaign’ on. In fact, if anything, far from dampening their spirits, they see it as an opportunity to test their wet weather equipment to see if it really works.

Wrapped in rain capes and sheltering inside tents, they have all the appearance of being straight out of wartime newsreel film footage.

Those groups depicting WWI up to more recent periods can parade in rain capes, ‘ponchos’, sometimes referred to as ‘gas capes’ and look thoroughly authentic from the Somme to Falklands and even more recent conflicts. Re-enactors depicting Germans sometimes turn out wearing an over-the-head woollen item called a ‘toque’, which is wholly authentic and can be worn either as a hood or to keep the neck warm. It is a simple item and is often seen in wartime photographs, especially on the Eastern Front in the harsh winters in Russia. If somebody is handy with knitting needles they could make one themselves, but they can also be purchased ready made from suppliers such as either Epic Militaria (www.epicmilitaria.com) or Soldier of Fortune (www.sofmilitary.co.uk).

If you should happen to be depicting more recent events and Special Forces units, such as the SAS, the balaclava-style hoods worn by these troops can also be purchased from suppliers. These items, which have origins in the Crimean War, are functional as well as being authentic. Gloves are another functional item which re-enactors can wear to complete a depiction, whilst at the same time being warm, and remaining authentic. During WWI, millions of pairs of gloves were issued or knitted as gifts for the troops. The types worn for re-enactment purposes, however, do have to be knitted using sensible colours such as grey, green, black or blue. Again, if your skills do not run to making such rather complicated items, they can be purchased online or brought in a stores, which specialises in outdoor wear such as Milletts. Check online to see where your closest shop is.

Earlier periods of re-enactment, such as the Roman army, are not so fortunate in being able to purchase weather-proof clothing so easily. The wet weather cape, called the penula, for example, looks relatively simple to make, but if you do not have the skill or material to produce one for yourself you can always purchase it. That is where the re-enactors markets are essential. Traders and suppliers provide for those earlier periods, which re-enactors enjoy, including Roman, Medieval and even Napoleonic Wars. These specialist markets include The Original Re-enactors’ Market (TORM), which can be found at www.reenactorsmarkets.co.uk.

During the Roman occupation of Britain, Legionaries were posted to the far north of the country at garrisons along Hadrian’s Wall. At the site of Vindolanda, many personal artefacts have been unearthed, including letters written by the troops asking for socks to be sent.

Other examples of correspondence refer to socks, underwear and sandals, to help make conditions in the extreme cold climate that more bearable. Remains of Roman tents have also been uncovered on the site and this shows what the troops were using as shelter from the weather whilst on patrol. These items have been researched and suppliers can now provide them, knowing that they are authentic.

There are other similar markets held for re-enactors at a range of venues around the country, including the International Living History Fair (www.livinghistoryfairs. co.uk) and the National Living History Fayre (www.nlhf.co.uk) Many of the items needed for re-enacting in bad weather are readily available at these events, but failing that, orders can be placed. These markets offer the opportunity to discuss with the producer your own personal requirements and the size. That way, you are guaranteed satisfaction.

Traders at these markets also supply items for 19th Century history, including the Napoleonic Wars and Crimean War. You only need look at Napoleon’s Campaign into Russia in 1812 to learn how severe the weather could be. The day before the Battle of Waterloo it rained a terrible storm, which turned the ground into a sea of mud and the troops took shelter as best they could. A waterproof covering was provided to fit over the Shako caps of the armies and capes and greatcoats were also issued. These items can be purchased from suppliers at re-enactors markets, but some groups do have members in their ranks that are skilled to produce these items. The result looks good and keeps you warm.

We know how atrocious weather conditions can affect campaigns, not only in the time of Napoleon but also both world wars, and more recently in the Falklands War in 1982. During this last operation, extreme conditions of cold and wet produced a medical condition called ‘trench foot’, caused by prolonged immersion in water. It had not been seen in such numbers since the end of the First World War and no one had expected it to afflict troops. Yet, here it was, almost 70-years later.

Some re-enactors hold the opinion that if soldiers did it for real during foul weather, then, surely, they can continue with an event during rain and wind. They concede the points that they are not in danger with an enemy shooting at them, and at the end of a display they can dry off and get warm. Nevertheless, there are some groups who do eat and sleep in authentic conditions under canvas tents. One year a terrible storm hit Military Odyssey, with tents, including many modern designs, being hit and blown down. I was one of those camping onsite and the next morning we emerged bedraggled, but none-the-worse for wear.

As seasoned campaigners, everyone sorted themselves out and set about the day’s displays. Weapons were cleaned, uniforms dried off, horses groomed and displays reconstructed. Then it was down to business as usual. It was something re-enactors do to keep the event going and the organisers know that and appreciate such commitment. In all the years that I have been covering events, I have only known a handful of events to be cancelled due to severe weather. On a couple of these occasions the event was cancelled on the advice of the Meteorological Office itself, on the grounds of safety.

The British enjoy talking about the weather, but they accept that it is what it is. There have been times when groups have wished to depict a scenario, but the conditions just do not suit the moment. For example, one year at War & Peace, when it was held at the Hop Farm, the weather was blazing sunshine and very hot. A couple of groups combined resources to depict an incident from the Battle of the Bulge, which most readers will know was fought during sub-zero conditions with deep snow drifts. Despite that, snow machines were used to create the blizzard and the participating re-enactors wore white winter snowsuits. It was a classic example of an ‘oxymoron’ moment, which sits so comfortably within the world of re-enactment. It was perfect and the on-lookers were thrilled.

This depiction worked well and had to be organised, but there are groups who portray units, which took part in the actual event and they visit the battleground in and around the Ardennes Forest during the depths of the winter. They do it, firstly because they can, and secondly because it is their tribute to the men who did it for real. I have spoken to some of those who have taken part in the event, and they say it is a truly remarkable experience. It evokes everything about the battle, especially when it snows. Now that is taking re-enactment to whole new levels of authenticity.

Re-enactment events in any country are completely at the mercy of the elements. Everybody is aware of this fact, from the organisers to the public, and the re-enactors themselves probably more than anybody else. If all concerned are prepared to continue, they go ahead and carry on. After all, it’s only a drop of rain or a bit cold. I am reminded of a group that participated in the multi-period event, which used to be organised by English Heritage at their property of Kirby Hall near Corby.

It was in 2002 that I met the group calling themselves the ‘Antarctic Adventurers’, depicting the ill-fated expedition led by Ernest Shackleton in 1914. The photographs I took remind me that the weather was not particularly brilliant that year and the group’s display was fitting, as they stood wearing all the cold weather clothing from the period. I remember talking with them to ask where they got all their equipment. They explained it was all the props from the award-winning 2002 BBC television series ‘Shackleton’ starring Kenneth Branagh. Everything looked authentic and as though it had just come off the expedition’s ship the Endurance. When something looks this good at a re-enactment event it is remembered for all the right reasons.

So, there we have it. There is no reason why events should not continue due to some bad weather. If the participating groups can muster themselves for a display, then the public will turn up to see them. Visitors are not the only ones who can wear appropriate clothing for the weather conditions, as we have seen. It is all available for any period and can be used for the purpose for which it is intended and to make reenactment comfortable. Not only that, it looks authentic.