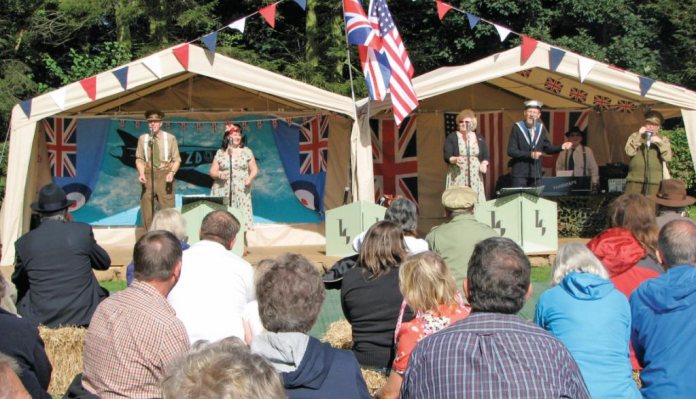 Popular entertainers have always been recognised by audiences to which they have performed live on stage, including Shakespeare’s plays to the days of the Music Halls. With the advent of cinema, this became more apparent as the audience numbers grew. By the time of the Second World War, some performers had gained ‘celebrity status’ and were recognisable to millions. The radio added to this, by playing recordings of popular music, along with live broadcasts of artists to provide entertainment for the masses.

Through their music and films, actors such as Fred Astaire and Ginger Rogers, Hoagy Carmichael and the unforgettable Glen Miller, these performers were able to use their talents to entertain the troops to keep up morale and, for a short while at least, help them to forget about the war. These songs and the music, some of which are over 80-years old, continue to be enjoyed today by re-enactors at 1940s weekends. Modern entertainers at these shows perform in the style of Al Bowlly and the Andrews Sisters, which adds to the atmosphere and, by dressing in the style of the period, they evoke the wartime years and become re-enactors themselves.

Some modern performers wear the uniform worn by the entertainers who appeared through the organisation known as ‘Entertainments National Services Association’ or ‘ENSA’, which was the idea of Basil Dean and Leslie Hanson, who had experience in theatre production. In 1939, they suggested that the talents of singers and musicians might be used to entertain the troops. The suggestion was accepted and later extended to performances at factories engaged in war work. One of the earliest popular comedians was Joyce Grenfell, who went on to tour India, Italy and North Africa with her pianist, Viola Tunnard, delivering monologues and songs.

The idea of ENSA proved so successful that between 1939 and 1946 the organisation produced some 2.6 million shows and entertained around 500 million people, in all theatres of the war. Thousands of performers appeared in acts which included comedians, singers, magicians and orchestras. The unit was not without its critics and soon the letters of the unit were referred to as standing for ‘Every Night Something Awful’. Despite this, ENSA did sterling work, with performers such as George Formby, Flanagan and Allen, performing for the troops, and Vera Lynn, who went on the become the ‘Forces Sweetheart’.

The American equivalent, raised in early 1941, was the United Services Organisation (USO) and, like its British counterpart, utilised the talents of the performers of the day, including singers, film stars, orchestras such Glen Miller and the comic talents of Bob Hope. Between 1941 and 1945, the USO produced almost 300,000 performances in over 200,000 separate visits to entertain 161 million service personnel.

Today, entertainers such as Dickie Lines attend various re-enactment events, where he recreates performances by the likes of Noel Coward, George Formby and Arthur Askey. His style is family friendly and with enough energy to sustain a continuous repertoire of songs, to which re-enactors can either dance or sing along with. Another perennial favourite with re-enactors, is the hugely talented Paul Harper, who, as part of his act, performs a tribute to Al Bowlly, who was sadly killed in an air raid in 1941.

The show must go on

Performers with ENSA or the USO, being civilians, did not carry weapons, not even when touring in theatres of operations including North Africa, the Far East and Europe. Regardless of the dangers, they shared all the hardships, knowing full well that they could have been taken prisoner or even killed due to enemy action. Indeed, the only ENSA performer to be killed during the war was a dancer by the name of Vivienne Fayre, who was tragically killed when the truck in which she was travelling ran over a land mine. The entertainers had talent in abundance and were very brave, to the point where they continued to perform even during air raids. Such were the hazards they faced, and which many in today’s audiences do not consider whilst enjoying the entertainment at shows such as Dig for Victory Show or War & Peace Revival. In fact, it is at shows such as these, and others, like Wartime in the Vale and the railway wartime weekends, which present continuous performances, that entertainers can remind people of this fact.

Individual ‘strollers’ wearing ENSA uniforms and the caps with the special badge can sometimes be seen walking around at events, adding an extra touch to the ‘Home Front’ with their presence. Some have been known to break into an impromptu performance much to the delight of visitors. The ‘seasoned veteran’ performers like Dickie Lines perform a complete act on railway platforms to entertain passengers waiting for their trains. The uniforms to portray ENSA can be obtained through suppliers such as Soldier of Fortune (sofmilitary.co.uk) and the cloth badges can be purchased from suppliers such as Div Patches (divpatch.com) and the metal cap badges are not that uncommon and can be picked up at militaria fairs. Add an instrument, like a ukulele, and the effect has been achieved for relatively little outlay.

Event organisers have long realised how popular live period entertainment is and provide proper, if temporary, stages for entertainers from which to present their acts and even provide seating for the audience. This live entertainment, as experienced during the war years, recreates the mood of mass entertainment of the period, including sing-alongs.

During the post-war conflicts, troops still needed to be entertained and the services of performers were required in places such as Vietnam, Korea and many other locations. Just as in those days, we can enjoy orchestras, dancers and comedians at these events. Keeping in touch with the changes, are groups such as the Jive Aces, who perform music from the 1950s when it was National Service and saw future stars such as Michael Caine, Les Dawson and Paul Daniels serving in the ranks.

American troops serving in Korea were entertained by Marilyn Monroe, who wore military uniform for travelling but appeared in dresses to sing renditions of a whole new range of songs. She also travelled in tanks, jeeps and aircraft to reach the troops. This was the glamour of showbusiness and the troops loved it, leading to more female entertainers following her lead. Today, female performers such as Natasha Harper, the daughter of Paul Harper, continue this tradition and include tributes to those first women ‘stars in battledress’.

The performers appearing with ENSA did not receive any medals or certificates in recognition of their hard work to the war effort. Some went on the achieve fame and stardom in the post-war years and some former servicemen became entertainers themselves, such as Harry Secombe, Spike Milligan, Jimmy Edwards, Eric Sykes and Peter Sellars, to name just a few. It is now down to the re-enactors and performers, to preserve with their tributes, the memories of those brave men and women who went unarmed to the battlegrounds.