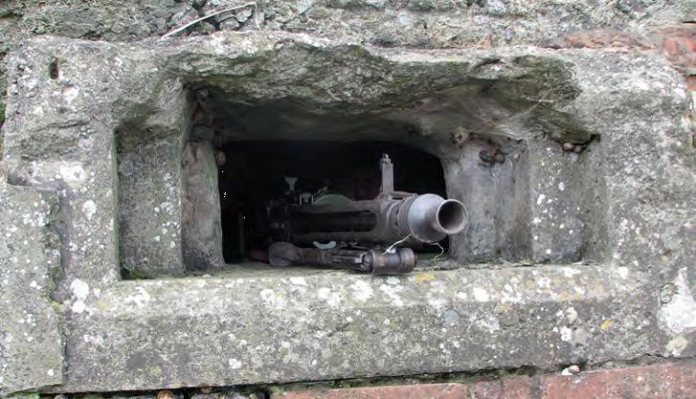 In Somerset, the main A372 road between Bridgewater and Langport skirts around the area of Westonzoyland, which appears to have little in the way to connect it with events in the Second World War. However, it hides a secret. Look carefully and the substantial remains of a runway can be clearly seen as the modern road bisects what was Station 447, which served as the operational base for No.16 Squadron, which flew Lysanders and Mustangs. In 1944, it was taken over by the US 9th Air Force and Transport Command, to support the Normandy Campaign. Today, much of the land has been returned to farming and the owner has set aside part of the land on which to host a wartime re-enactment weekend, with vehicles and displays. The first event was held in 2017 and this year’s event was bigger and better. The vehicles included a Chieftain tank and a Combat Engineering Tractor, both heavyweights in the world of military vehicles.

One group that caught my attention was the 304th Panzer Grenadiers, which had dug a weapon trench in which was a range of equipment and machine guns was displayed. Next to the site, was one of several wartime pillboxes, built to protect the airfield, and added to the effect that was being recreated. A quick request and a couple of the chaps from the group agreed to use the pillbox as a machine gun position. It could have been somewhere on the Russian Front rather than Somerset and, I must admit, it reminded me of a scene from the 1977 film ‘Cross of Iron’, staring James Coburn.

From strength to strength

The Westonzoyland event, as it has already become known among re-enactors and vehicle owners, has gained a reputation for being a very good event, which promises to get even better. If this year’s event is anything to go by, it is certainly sure to grow and develop in strength and popularity. The 304th Panzer Grenadiers put on a great display, as did all the other groups, and included information boards to tell visitors something of the wartime history of the group, which saw service in Russia, the Normandy Campaign and was one of the last units still fighting in Germany in April 1945.

The group was formed in 2013 and has grown in that short time to be able to present excellent displays of weaponry and equipment, to depict an ordinary infantry unit. The group attends several events and is keen to welcome new members to join them. If this is something which interests any re-enactor, the 304th Panzer Grenadiers, which asks the enquiring question ‘Fancy doing something different with your weekends’, can be contacted through their website at: www.304thpzgren.com.

Details and news of this year’s Westonzoyland event and for 2019 can be found on Facebook by typing in the name and adding ‘1940s weekend’, which will either direct you to one of the Facebook pages or through to the site of the 304th Panzer Grenadiers.