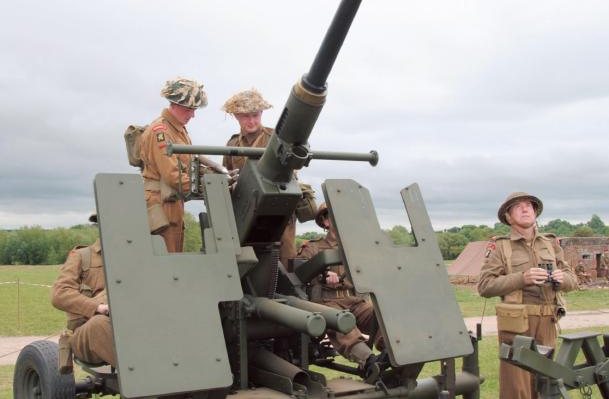 During the Second World War, many regiments of the British army raised multiple battalions, which were deployed to various theatres of war. One such regiment, was the Somerset Light Infantry, which has been involved in many wars since it was raised in 1685. Between 1939 and 1945, the regiment had eleven battalions, six of which were deployed overseas and two of which, the 4th and 7th Battalions, took part in the Normandy Campaign, after the initial landings on the 6th of June 1944, as part of 43rd Wessex Division.

The 4th and 7th Battalions landed at Arromanches and Courseulles respectively in the second half of June, in time to take part in Operation Epsom between 26 and 30 June, where they saw heavy fighting. Ten days after Operation Epsom, the 43rd Wessex Division, including the Somerset Light Infantry, was ordered to move towards a feature known as Hill 112, where it became engaged in Operation Jupiter. Over the course of 10 days fighting, the 4th Battalion lost 525 men out of a strength of 830 men.

Further battles lay ahead for both battalions, as part of 43rd Wessex Division. Today, 75 years after these events, Somerset is proud of the achievements by the county regiment, and rightly so. It was this history, which led Paul Hurren to form the Somerset Light Infantry re-enactment Group in 2015, as a tribute to these brave men of Somerset. He decided to focus on the 4th Battalion, which has around 18 members, which is enough to show two infantry sections with all their equipment and weapons.

I’ve known of the group for several years and seen them at various events and have always been struck by their smart appearance. However, it was only over the long Bank Holiday weekend at the Westonzoyland event in Somerset, 25th to 27th May, that I was able to organise some photographs with them. On site, was a Bofors 40mm light anti-aircraft gun and I was inspired to put the group together to create something unusual. I asked the owner, Mark Towers, and he readily agreed to the use of the gun. On asking the SLI if they would serve as crew for the gun, they were ready to a man to do something different.

As the troops were getting ready, I spoke to Mark Towers to get some background details of the Bofors gun. It turned out that Mark has a lifelong interest in military history and has been collecting military equipment for ten years. He served 17 years in the Royal Signals and since coming out of the army he has acquired some larger items of kit in his collection, the Bofors being just one piece. He explained that he has a Canadian-built Ford CMP Light Artillery Tractor to tow the gun, but it was having some maintenance work done, which meant it was not at the event.

Mark went on to explain that his Mk II Bofors was built in Canada in 1942 by the Otis Elevation Company, which put it in the right period to depict Normandy 1944. He also had a 1942 Matchless G3L motorcycle, complete with the correct insignia, to denote an anti-aircraft unit. By now, the troops had received some basic instructions on how to operate the gun and had taken up their positions.

Infantry in WWII had to be versatile and some battalions even received training in anti-tank and anti-aircraft guns, in the event they would be called on to serve in these roles. Despite being thrown into the ‘deep end’, so to speak, the SLI took to their unexpected new role with all the enthusiasm as soldiers would have done on being introduced to a new piece of equipment. That is one of the great things about re-enactment, everyone is ready to try something new.

Within a couple of minutes, the SLI were traversing the Bofors and elevating and depressing the barrel like true experienced gun crew. Using the sights came naturally to the gunner, having been used to using sights on other weapons. The range of ages, from young lads to older men, was representative of a typical infantry section serving in the Normandy Campaign in the Summer of 1944. The Platoon Commander participated by acting as an observer, spotting for targets with his binoculars. The Bofors gun served in all theatres of the war and with a rate of fire around 120 rounds per minute and the barrel capable of being depressed to engage ground targets if required, it was an allround weapon. All these details the SLI learned during their ‘on the job training’.

Like other groups, the SLI get their equipment from a range of sources, including eBay, table-top traders, militaria fairs, bric-a-brac; in fact, wherever they see an opportunity, they seize on it. Unit badges they get from Monty’s Locker (montyslocker. co.uk) whilst legally de-activated weapons, such as rifles and Bren Gun, typical of an infantry section, are purchased from traders such as World Wide Arms and D&B Militaria. They also have replica PIATs and mortars to add to the group’s range of weapons for static displays.

The uniforms, I was informed, came from a supplier called Panther Store, which is based in the Czech Republic. I looked at the quality of the garments and they are of very high standard. Since then, I have also checked the website (panther-store.cz/en/ catalog/en/czechoslovakmilitaria- 1918-1945) The company specialises in uniforms of the British, German and Czechoslovakian armies of the period 1914 to 1945. Prices are in Euros and items can be purchased online and the pages are easily accessible.

The group puts on excellent static displays of equipment and weapons at events along with other items, to show what an infantryman in the British army of WWII carried into battle. They put on displays of tactics and weapon firing displays and take part in battle re-enactment, also. In fact, the SLI are an all-round group and very interactive, answering questions and just talking about related topics in general. The group is also very proactive and, during the celebrations to mark the 75th anniversary of the D-Day landings, the group went to Normandy to visit some of the locations where the battalion fought, including Hill 112, where they laid a wreath in memory of the men who fell in battle.

The group will be attending the WWII event at Lacock in Wiltshire in August, where they will be pleased to meet potential recruits interested in joining their ranks. For those who are unable to attend, the 4th Battalion Somerset Light Infantry can be contacted through Facebook at: @WWII4SLI.