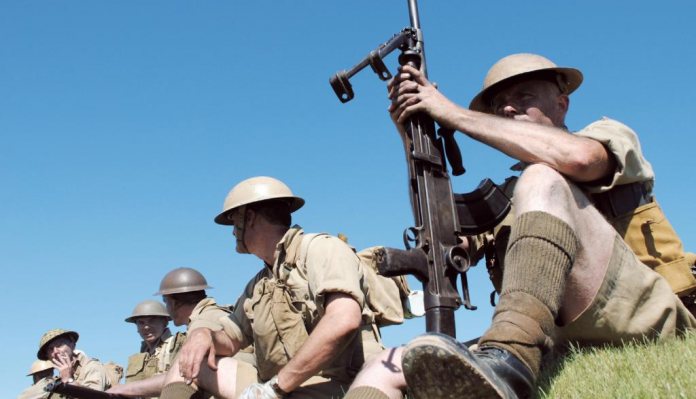 We do not know very much about those men who made up the rank and file legionaries who helped forge the Roman Empire more than 2000 years. About the military commanders who led these legions in their conquest, such as Trajan, Augustus and Julius Caesar, we know much more because of their status and the writings they left. That does not make the individual legionaries historically less important. In fact, if anything, they should be viewed as being the opposite, because without them, there would not have been a Roman Empire.

This rather uneven balance of importance is being redressed by modernday re-enactors who have, through painstaking research, managed to recreate the ranks of the ordinary legionary and formed groups such as the Ermine Street Guard and the Legio Secunda Augusta. In doing so, they are preserving the memories of these otherwise unknown men.

Move the time frame forward 2000 years, and the re-enactment groups who create units to depict regiments from both world wars and other conflicts, are doing the same. They are preserving the memories of those ordinary, but immensely brave, men and women who served in these more recent wars and, in doing so, have established a living memorial, which passes on the details through displays at public events. Whichever period you choose to look at, Napoleonic, Medieval or Victorian, you will find re-enactors who are preserving these memories.

Some groups, which depict more recent conflicts, are fortunate enough to have the support of veterans among their friends. These very special people, despite being advanced in years and often with frail health, are still sufficiently plucky to turn up at displays. For example, the group known as ‘Somewhere in China’, had a static display at Tankfest in 2015, which reminded people of the Korean War. With them, they had Major David Sharp, a veteran of the war, who had been held prisoner by the North Koreans for 30 months

Sadly, David Sharp passed away in 2016, aged 88 years. His was a remarkable experience and to meet him and learn of his ordeal was very humbling. His memory and deeds are preserved by other reenactment groups, such as Bersayap Tentara, with whom he was also a friend and supporter. This group depicts the Malayan ‘Emergency’ between 1948 and 1960. Translated from the Malay, the group’s name means Winged Soldiers. On its website (www.wingedsoldiers.co.uk) the group remembers the veterans of this conflict, and at events such as War & Peace Revival, its display features some of the experiences of men such as David Sharp.

Veterans are always welcome visitors to reenactment events such as Military Odyssey, the Watercress Line and Dig for Victory in Somerset. These men and women, with their first-hand experiences from the conflicts, enjoy visiting the re-enactment groups depicting these periods. They can tell the members of the groups what it was like and what happened to them. To see these two generations engaged in conversation is truly inspiring. The veterans talking in a very matter-of-fact way and the re-enactors in awe, as they hear first-hand what the war, they are depicting, was like for those who were there. Such meetings are becoming increasingly rare, as the veterans succumb to age, but for those re-enactors and visitors to events who have been fortunate to meet these men and women, they will never forget the experience.

Unfortunately, all the veterans from WW I have passed away, but their memories and experiences of the battles in which they fought are being preserved by re-enactment groups. The ‘Last Fighting Tommy’ of the British army was Private Harry Patch, who served with the 7th Battalion Duke of Cornwall’s Light Infantry. He died in 2009, aged 111 years and today there are memorials to him in Wells, Somerset, and on the banks of the Steenbeek stream near Langemarck in Belgium, where he served and was wounded in 1917. That is a remarkable feat for an ordinary man of the ‘rank and file’, whose experiences will be remembered.

Obviously, there are no veterans from earlier periods, such as Victorian or the Napoleonic Wars. What we do have instead is the next best thing, the diaries and written first-hand accounts. For example, Edward Costello, Thomas Plunket and Benjamin Harris, who all served as riflemen in the 95th Rifles Regiment. These ordinary enlisted men have left behind inciteful accounts into the everyday life of soldiers in the British army and battles they fought in during the early years of the 19th Century. These documents are their legacy and as such are preserved for posterity, thereby allowing re-enactors to better understand events of the time.

These few examples listed here show how important it is that we remember the ordinary soldier as much as the Generals. These were the troops who did the fighting and the list goes on. The defence of Rorke’s Drift in January 1879, for example, was a small-scale action compared to the disaster which befell the British army at Isandlwana at the same time. This engagement is well documented and many of the enlisted men, as well as the officers, are remembered for their bravery, which earned them the Victoria Cross. Our old friends ‘The Diehards’, who depict the 57th Regiment of Foot so magnificently, present displays which remind us of these events.

At the battlefields across Europe, there are to be found memorials. These are the static tributes, to the regiments which fought at the site, from Normandy to Waterloo, and from Ypres to the Somme along with many hundreds, if not thousands, of other locations. Even across Britain, there are many of these reminders, none of which happened that long ago. At Slapton Sands, on the south Devon coast, there is a memorial to the 749 American soldiers killed due to enemy action in April 1944 during Exercise Tiger, a training operation in the lead up to D-Day. At those sites where there are no memorials, at castles such as Old Wardour, it is the re-enactment event held in the grounds which serve as the memorial, albeit only temporary, to remind people of events that happened there.

Re-enactment events are like mobile memorials, which can be taken to events where displays are laid out as reminders of battles such as Agincourt, Bosworth and Langport. It’s not just battlefields, war memorials are to be found in almost every town and village across the country. Some of the battlefield sites are used as the location for battle re-enactment scenarios, including Basing House, Tewkesbury and Hastings. These events draw visitors to the sites to see the memorials and walk around the battlefield. From such visits it is easy to become immersed in the history, which can, in turn, lead down the route towards re-enactment to continue the process of remembering.