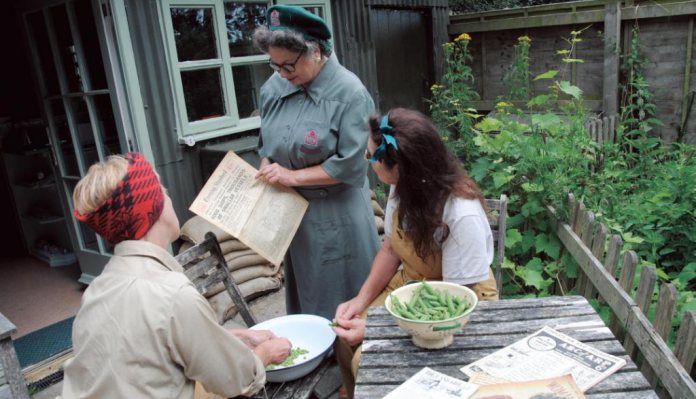 The role of women in both world wars cannot be over-emphasised, and the part they undertook in these wars was more important than could ever have been realised at the time. The ladies who served in various duties are also veterans and some have recorded their experiences, which has allowed military and social historians to conduct in-depth research into their achievements which reveals just how remarkable these ladies were.

The part played by British women in joining a branch of the armed forces is widely recognised, such as the 75,000 who joined the Women’s Royal Navy Services, WRNS, 180,000 who served in the WAAF and the 190,000 in the Auxiliary Territorial Service. Add to this figure the 50,000 women who served in the unofficial capacity with the Home Guard and we arrive at a figure of 495,000 women in uniform. To put that into perspective, that is more than three times the strength of the force which landed in Normandy on D-Day.

Women also served in other uniforms from the police to the fire services and the Royal Observer Corps and the Air Transport Auxiliary, ATA, which had 168 qualified female pilots to deliver aircraft to operational air bases. Then there were 80,000 serving in the Women’s Land Army, working in agriculture to produce food, and a further 6000 in the Women’s Timber Corps. On top of that, there were millions working in the factories producing aircraft, trucks, weapons and ammunition. There were thousands more who served in organisations such as St John’s Ambulance, British Red Cross Society and the Salvation Army, an institution which is sadly overlooked.

Such roles have given female re-enactors the chance to create their own separate groups and mount displays and demonstrations. The badges and insignia are also collected by the female re-enactors which add to their group displays, such as the several ladies who have joined together to form ‘Landgirls at Large’ and attend events around the country. There were other female organisations which helped support the war effort, also.

The first was the Women’s Institute, which had its origins in Canada in 1897, and was enthusiastically picked up in Britain. In 1939 the WI had almost 330,000 members all of who would assist in evacuation of children and care for those who lost everything in the Blitz Raids from 1940.

Female re-enactors put on superb displays to remind visitors to events of the hard work undertaken by this all-women’s army of volunteers that processed hundreds of thousands of tons of food to help feed the country. They did not wear a uniform, but they had arm bands and badges worn on the lapel to identify themselves. The Women’s Voluntary Service, WVS, was the idea of Stella Isaacs, the Marchioness of Reading, who formed the organisation in 1938. It had its own uniform, badges and lapel pins, with branches across the country.

Memorabilia from the WVS is now very collectable and many female re-enactors turn up at events wearing the uniform. They also put together displays of collectables along with demonstrations of the work undertaken by the WVS, such as providing support for the troops and fund-raising. The WVS also ran canteens to feed people and help with the evacuees and assist the victims of the bombing. During the war some 241 members of the WVS were killed in air raids. Fifteen female pilots serving with the ATA were killed during the war, while the ATS lost 1000 women and the WRNS and WAAF 300 and 731 respectively.

Women served in other roles, such as postal workers, railway porters, bus drivers and ticket collectors, known affectionately as ‘clippies’, as well as guards on trains, nurses and even staff with the Navy Army Air Force Institution (NAAFI), all of which required them to wear a uniform and wear badges. Memorabilia of these roles is also very collectable, not just among women but also male collectors. Female re-enactors do turn up occasionally wearing uniforms of these services, which really draws attention.

Even the younger girls in organisations such as the Girls Guides did their bit to help the country’s war effort. Across the country they were ‘mobilised’ on bicycles to help in any way they could, from picking fruit to helping those injured victims injured in air raid by administering first aid. This may not sound much, but everything was essential and thousands of these girls did all they could. The best example I have seen of wartime Girl Guides was at Winchcombe in Gloucestershire, where the young ladies were serving tea and cake, wartime style, whilst in period uniforms. It was a brilliant display by the Girl Guides who resembled a reality museum as they walked around the room serving cups of tea, just as they may have done during the war.

Despite such a diversity of roles available for female re-enactors to depict, by far the most popular remains the Women’s Land Army, with its distinct uniform and opportunities to perform scenarios to show who the women worked. Some events are attended by owners of agricultural equipment from the period, including threshers and bailers and tractors, fully operational to demonstrate how they worked. Many are very obliging and will allow the WLA to join in in, but always being aware of the safety guidelines.

The WLA group known as the Landgirls at Large was formed about 14 years ago by several female re-enactors all of whom share a common family background connection with farming. They attend events around the country with their display and will also join in with other WLA groups to put on working demonstrations using tools and equipment of the period. One of the ladies in this group is Bronwen Jones, who has been collecting WLA memorabilia for over 20 years and whose family were farmers, is very enthusiastic about portraying WLA. So much so, that Landgirls at Large even arrange to spend whole weekends completely immersed in the period and live the life.

During the war the girls in WLA were sent to farms around the country where they would either sleep in the main house or some farm building converted to the purpose of accommodation. In some cases, purpose-built accommodation was constructed with very spartan facilities. Not many of these constructions survive, but one example still exists on a former farm near the village of Baltonsborough, just outside Glastonbury in Somerset. It is an original building, constructed from corrugated iron, it can accommodate up to five and can be rented for weekends or longer.

For a few like-minded friends it is a great way of really getting back to life during the war to live as a WLA. This is not a recreation, but a real surviving example of what the WLA girls would have lived in while working on the farm. It has an open fire and indoor plumbing but otherwise it has very basic facilities, reflecting the lifestyle of the time. In the village of Baltonsborough there is a pub and a village shop, which are used to seeing WLA re-enactors in uniform dropping in for a drink or to stock up on supplies. In the garden an Anderson Shelter has been reconstructed to add to the experience. For those interested in knowing more about the ‘cottage’ details can be found at: underthethatch.co.uk/landgirls

Female uniforms can be obtained from specialist sources such as: the1940sshop. co.uk and sentimentaljourney.co.uk. Items can also be picked up at militaria fairs and car boot sales as well as general ‘bric a brac’ stores and charity shops. Postal workers and Salvation Army uniforms do come up for sale which are perfect for individual ‘strollers’ to walk around events. The opportunities for female re-enactors have widened considerably over the last few years with more groups being formed and more interest being shown in the roles undertaken by women who were more ‘empowered’ long before the term became fashionable. Female re-enactors are indeed fortunate to have these veteran ladies around to pass on their first-hand experiences and share these memories which will be used in displays to make sure the role of women in both world wars is never forgotten. GM