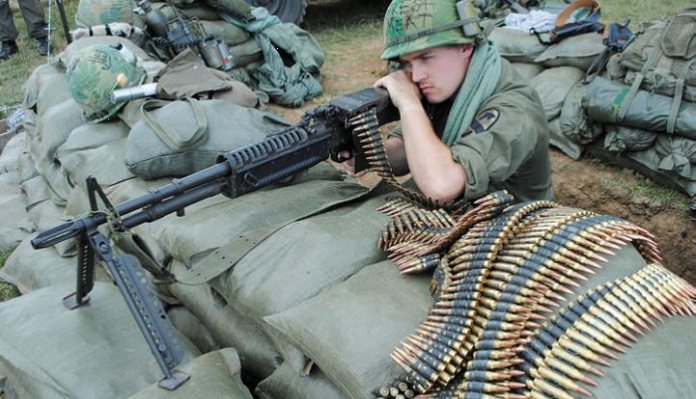 Re-enactment events are very busy places, with lots of crowds and plenty of action as vehicles are parked, horses tended and groups get ready for displays. Preparation time is also a busy period, even before the show begins. Areas allocated to various groups for their displays must be marked out and barriers erected, for both purposes of safety and security. These remain in place for the duration of the event and normally comprise of ropes suspended on metal stakes, to cordon off the display area. Dozens of other points must also be considered, from firewood to water, which makes the event run well and keeps the re-enactors comfortable.

Mostly, the barrier arrangement works well and serves to keep visitors out of encampment display areas, where preparations for the event, such as period cooking or weapon cleaning, can continue without distraction. This is for insurance purposes and serves to prevent accidents. However, with so much happening, it is easy for members of a group to become distracted and with so much equipment on display, temptation for visitors to ease forward as close as possible for a better look.

By and large, though, this ‘low-tech’ security and safety arrangements work very well. Most people use their common sense and stay on their side of the rope. They also leave things alone, unless they are invited to handle items by members of the group. When the main arena event is presented, most visitors go to watch the battle re-enactment, leaving the rest of the area relatively quiet. Some visitors prefer this and take advantage of the lull to better see the static displays and take photographs without interruption. It is for this reason, that camp sites are never left unattended. Somebody must stay behind to look after the safety of things and take care of the security of equipment.

Those members of a group who remain behind keep themselves busy, engaging in other activities so as not to make it look obvious that they are on watch. Individuals may be repairing a piece of kit, such as an item of uniform, or a small group may be engaged in playing cards or a board game of the period. Whatever occupies them whilst the battle is in progress, and it fits in with the period being depicted, their presence does not make it obvious that they are on safety and security duty. As far as visitors are concerned, these members of the group are there to answer questions and engage in conversation, but they are alert to what is happening. Even tending the camp fires or sitting with a drinking mug can achieve the same effect.

For depictions in the 19th Century, such as Napoleonic Wars and American Civil War, sentries with muskets can be posted to patrol the perimeter line to show how the encampments in these conflicts were always busy. It is these images that visitors, see without focusing on the real reason, which is security. The same also applies for the English Civil War, with sentries patrolling with their muskets or else they can be sitting in conversation but still looking. At some events, groups can dig a small earthwork ditch to act as a demarcation line, to keep back visitors from entering the display area. This is also delineated with the rope and stake barrier for additional safety.

People are honest and compliant, leaving things alone and complying with requests to not touch anything or enter an area unless they are invited. Unfortunately, there is a very small element which believes that such terms and conditions do not apply to them. That is why the ‘stay behinds’ have to be vigilant without seeming to be so. The static displays at events often include many small items from the collections of members of the group and unfortunately some of these things can and do ‘go missing’. This is a sad fact of our society today and means that members of groups must be extra alert, especially at the larger, busier, events. Such acts are not annoying ‘petty pilfering’ but tantamount to destruction of property. No-one likes causing a scene, just in case it turns out to be unfounded. Therefore, it is better in this case to exercise prevention by watching everything, but very discreetly.

Groups achieve this in a very subtle way, by always leaving a couple of members at the camp or display site. For example, groups depicting WWII can leave a couple of members on site to depict sentries being engaged in watching for targets by using binoculars. At other times, just sitting around and discussing matters serves the same purpose. There must be plenty of times when, wandering around, this type of activity has been seen. Cleaning weapons also works well, while providing the group’s display site with simple, yet effective safety and security.

Displays depicting the Vietnam War face similar problems and can be dealt with in an identical way. Just by having a couple of members on-site drinking coffee or having a chat to keep an eye on things, they can also answer questions. Some Vietnam groups erect replica barbed wire barricades, watch towers and vehicle checkpoints, which impart the impression of a secure compound, as seen in original photographs. Visitors pass through these features, happy to be part of the display, without realising the purpose.

Today, we all aware of how safety and security arrangements have become an integral part of our modern lives. Things displayed by re-enactment groups are expensive and their loss must be safeguarded against. Likewise, when it comes to on-site safety, it is better to prevent an accident than incur the inquisition, which is ‘Health and Safety’. Insurance does cover most things, but there are times when the unexpected happens and must be dealt with separately. It is the re-enactors themselves who keep things safe for all of us at events and we can all be grateful for them making things work as smoothly as possible.