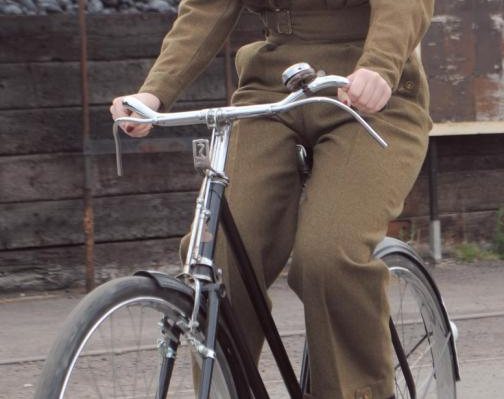 Armies across the world have used many modes of transportation during their campaigns over the years. These include horses and camels, along with motorised transportation, such as trucks. However, there is one method of transportation which is far more economical than any other form, does not require fuel or fodder, and can remain in operation with only the modicum of maintenance. It is often used as a means of transport by re-enactors, especially at events, where it comes in handy as a convenient means of getting around the site, especially the larger grounds. I am, of course, referring to the bicycle.

The first practical bicycle was developed in the early 19th Century and very quickly its value to the military was recognised. In fact, within only a very short time bicycles were in service with several armies, where they were used as cheap, effective means of transportation for the infantry. During the Franco-Prussian War of 1870-1871, messengers used them to convey orders between units. During the Second Boer War of 1899-1902, the British army and the Boers proved how invaluable bicycles were in war, with both sides using them as personal transport and to carry supplies and equipment.

Once the influential armies of the world, such as the British, French and Prussian armies, began using bicycles, other armies were quick to follow, because they could see the sense in their use. On bicycles, soldiers could cover many miles without becoming over tired and transport heavy loads. The importance of the bicycle continued to increase and during WWI the British army formed whole battalions in the Cyclist Corps. Sales of bicycles to the military soared in view of such successes. When Japan invaded China in 1937, it is estimated that the troops used as many as 50,000 bicycles during the campaign. In 1941, the Japanese army issued 6000 bicycles to each infantry division.

Today, we are used to seeing bicycles at re-enactment events but how often do any of us give any more than a passing thought to these machines? I must confess, I too was one of those, until I attended the 1940s event at the South Somerset Railway’s wartime weekend recently. Seeing a display of wartime bicycles set me thinking how many times I had seen bicycles used at re-enactment events, and the answer was quite a lot.

In fact, the more I thought about it, the more I realised I have seen many displays, which involved the use of bicycles. These included messengers, ARP Wardens, Home Guard, Women’s Land Army and policemen. The largest number of bicycles I have seen in use at one time was at the 2017 War & Peace Revival, when a whole platoon of German infantry rode into the main arena for a battle re-enactment.

Among some of the most enduring photographic images from WWII, are those showing British and Canadian troops coming ashore on the Sword and Juno beaches at Normandy on D-Day and carrying bicycles. In sharp contrast to these images, are those from 1940, which show Belgian and French refugees with their possessions on bicycles. With such a wealth of detail to draw from, re-enactors are not short of inspiration for displays or scenarios to recreate at events.

It is straight forward to incorporate bicycles into a Home Front setting, as men depict going off to work and the ladies of the Women’s Voluntary Service go about their duties. Police ride them at events, to show how towns and villages were patrolled by the local ‘Bobby on the beat’ and ARP Wardens cycle around to either warn of an air raid or give the all clear. It is fair to say the bicycle is an extremely versatile machine to have at a re-enactment event.

One of the most unusual depictions I have seen was that created to show a Swedish border guard post to guard a crossing point from Norway, circa 1940-1941. Among the items used in the display, which featured all genuine Swedish army equipment of the period, was an original wartime bicycle. By coincidence, I knew the re-enactor, Craig Appleton, and he explained how he obtained the machine through a specialist Online auction site. Such attention to detail turns a very good display into an incredible one.

Since then, I have done some Online research myself and discovered that there is a very healthy market in the buying and selling of wartime bicycles. Even the designs which were developed for the troops, such as the ‘folding’ bicycles for the Parachute troops, are available through these specialist auction sites. Among the several sites I looked at, the best were: www.milweb.net and www.oldbike.wordpress.com. Prices vary in accordance to the condition of the machine and its original purpose. Like everything else, it comes down to what someone is prepared to pay, but it makes sense to look carefully.

During the war, the German army used perhaps as many as three million bicycles, not including those civilian bicycles commandeered in the occupied countries, such as France and Belgium. When the Germans established the volunteer home defence units called the Volkssturm, in the later stages of the war, some of the troops were issued bicycles. Such troops were called Radfahrbeweglichemarschgruppe (Mobile Bicycle March Group).

Even frontline troops were issued with bicycles. For example, in March 1944, two of the six battalions of infantry forming part of the 17th SS Panzergrenadier Division were using bicycles, because the machines, not requiring fuel or food to operate, were even more economical than either vehicles or horses. The Germans used to pile weapons, such as anti-tank Panzerfausts and heavy loads ammunition on these machines, which were pushed by hand. Almost thirty years later, and in another war, the Vietcong were doing the same during the Vietnam War.

As well as being part of a display, bicycles can be used by members of the group to run errands on site to get supplies of drinks or something to eat. Not only is it a handy means of getting about, it does not require anyone to get out of character and allows them to remain in keeping with the event. The bicycle may appear humble, but it is an essential and highly versatile piece of equipment, which can fit into almost any situation a re-enactor cares to choose. As an afterthought, I have also seen bicycles used as ‘stand-alone’ exhibits to display collections of militaria. No one could ever say bicycles are not versatile!