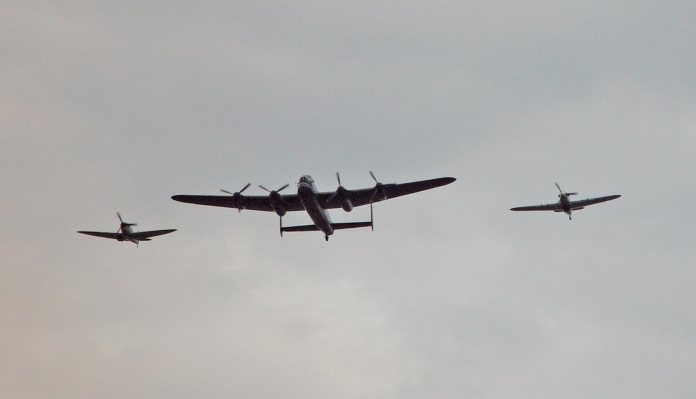 The Royal Air Force came into being on the rather inauspicious date of April 1st 1918, being created from the Royal Flying Corps and the Royal Naval Air Service.

There were several months still left before the Armistice would end WWI, at which time the strength of the RAF was 5182 pilots with 3300 aircraft of all types. Between 1914 and 1918 some 9378 pilots were killed, 7245 wounded, and 7000 aircraft shot down. After 1918 various countries reorganised their air forces with many reducing the number of aircraft. It is well-known that Germany was denied having an air force and the once-lauded pilots such as Ernst Udet and Goering, along with other fliers such as Hugo Sperrle, were retired.

Twenty years later, Germany had built up a powerful air force, the Luftwaffe, and European countries were also beginning to re-equip and expand their air forces. Bombers and fighters formed the backbone of all air forces but there were other branches including reconnaissance, supply and air support for the armies. After the fall of Europe in 1940 Britain found itself alone in the forefront of aerial warfare as the country was systematically bombed and the RAF beat off the Luftwaffe in the Battle of Britain. From 1942 USAAF bombers began to arrive to conduct operations against Germany.

Today these chapters in the history of aerial warfare are remembered by re-enactment groups who recreate units by putting on static displays and also ‘strollers’ who walk around events wearing air force uniforms of the period. Collecting equipment, uniforms and other items connected with wartime flying is very popular and some specialist collectors’ fairs have been established, such as that found on the website at: www.aircraftenthusiastfair.co.uk. Traders, such as D&B Militaria, based in East Grinstead, West Sussex, (www. dandbmilitaria.com) also have available some items related to air forces and the classified adverts in Gun Mart carry offers of aviation items for sale.

The range of reenactment displays connected to air forces varies widely from individuals, who simply walk around at events, through to complete groups who put on displays to show ‘Operations Rooms’ at work. One such group specialising in this type of display is the WWII RAF Group (www.ww2rafgroup. org). They were at the GWR railway 1940s weekend near Cheltenham where they put on a display in one of the large buildings. Telephones, map boards and plotters all helped recreate the atmosphere as an aerial battle unfolded. Strollers can also depict famous figures such as Air Marshal ‘Bomber’ Harris, Air Vice Marshal Keith Park or the Luftwaffe’s Adolf Galland.

Re-enactors mainly depict RAF, USAAF or Luftwaffe, because they are the most obvious choices. However, some years ago I remember seeing the depiction of Red Air Force pilots at an event. The Soviet Red Air Force received around 20,000 aircraft of all types from Britain and America and thousands of all types were flown in defence of Moscow between 1941 and 1942. Around 2000 were flown at the beginning of the battle for Berlin in 1945 and the Soviets ended the war with 18 air armies. Air forces during the war are all about numbers. For example, the USAAF reached 2,411,294 men and women at its peak and between 1940 and 1945 it took into service almost 230,000 aircraft. By contrast the German Luftwaffe had casualties of 70,000 killed and 25,000 wounded and also lost 100,000 aircraft.

The RAF started the war with fewer than 2000 aircraft and 20,000 personnel. In 1945 there were 9000 aircraft in service, with 144,488 aircrew and over 831,000 ground personnel. The RAF was bolstered by pilots from Canada, Australia, India, the West Indies, and many European allies; a fact which in itself widens the opportunity for re-enactors to depict air force personnel.

Other air forces such as Italian or even special squadrons can also be recreated, such as the ‘Cactus Air Force’ or ‘Red Tails’ which flew fighter escort. There is apparently a group in America depicting the famous ‘Red Tail’ pilots and no doubt over time we will also see other air force re-enactors emerge such as French pilots. Younger re-enactors can depict pilots whilst older members can portray Group Captains or even Air Marshals. Female members of the groups can depict maintenance crew and even pilots of the Air Transport Auxiliary Air who flew aircraft from the factories to the squadrons. Some of the ladies engaged in this role actually flew more types of aircraft and clocked up more hours of flying than some men. Perhaps the most famous of the ATA pilots was Amy Johnson who was tragically killed in 1941 when her aircraft crashed. It is quite possible that one day we may see a lady recreating this incredible woman as a tribute.

Unlike groups which re-enact armies with vehicles, those groups which recreate air forces do not usually have access to real aircraft of the period, because these are mostly in museums. Instead they have to rely on replica aircraft which look very good and allow static displays to be built up around them. Rex Cadman who organises War & Peace Revival has a number of these aircraft, including a replica Me bf109 fighter. Over the years these have been used to depict the Battle of Britain in static displays and are his personal tribute to commemorate the men who flew to save Britain. These replicas are built from fibreglass and can be dismantled for transportation and storage.

Scaled-down flying versions are available from companies, at a cost, and looking at their websites is the ultimate in shopping online at: www. supermarineaircraft.com. Some events have fly past displays by historical aircraft such as Dakotas, Mustangs or even the Battle of Britain Memorial Flight which is always an incredible sight (see the Essex HMVA Military and Flying Machines Show story in Diary Dates).

The battles fought between aircraft took place in the skies and left no trace unlike the battlefields such as Normandy or Arnhem. However, one thing which groups recreating air forces have over armies is the fact that wartime airfields are often used to host special events. One of the most famous is the Flying Legends Show organised by the IWM at Duxford in Cambridgeshire. This airfield was in the front line throughout the war, Douglas Bader flew from here during the Battle of Britain, and bombers of the USAAF also operated from the airfield. Each year a massive air show attracts thousands and re-enactors add to the experience in their uniforms. Biggin Hill in Kent, another Battle of Britain airfield, also hosts an air show as does RAF Lyneham and the site of the War & Peace Revival Show was also once used by the RAF during WWII.

Some groups have units depicting air force within their organisation, whether RAF, Luftwaffe or USAAF and these depictions offer something different in the way of displays. Dispersal huts, operations rooms and even hospital wards for wounded pilots have already been recreated for events. Some re-enactment events have also been established which focus on the RAF and the Battle of Britain. One of these is Graham Adlam’s annual Battle of Britain Show held at the WRSA Rally Fields, Norton Fitzwarren, Taunton, TA4 1BH. This year’s show is being held over the weekend of 29-30th August and is a tribute to the 75th anniversary of the Battle of Britain. Graham is the owner of Spitfire Spares (www.spitfirespares. com) and puts on a show using his replica Spitfire and Hurricane aircraft to show a fighter airfield. He has a range of displays and even a replica WWI FB9 Vickers ‘Gun Bus’ to show the development of aircraft.

Kitting Out and Collecting

Original items of equipment are highly collectable and some pieces put on display are very expensive and very rare. Some reenactors do wear original items of uniform to show how it looked and explain to the visitors the function of each piece. Replica items are available from a range of sources including reproduction trade badges and insignia for ranks, such as those made by Divpatch (www.divpatch.com) which produces RAF, Commonwealth and even Polish pilots’ badges. The Welsh-based company of Epic Militaria (www.epicmilitaria. com) offers a very good range of badges and reproduction uniforms for British, American and German air forces. USAAF pilots’ jackets in leather, A2 for fighter pilots and fleece-lined B3 jackets for bomber pilots are very popular with re-enactors and just for ordinary day wear. These jackets were sometimes personalised with logos and images by their wearers.

Another Welsh-based company specialising in reproduction items for re-enacting air force is Soldier of Fortune (www.sofmilitary.co.uk) which has an extensive range of items and uniforms for USAAF, RAF and Luftwaffe. Items can be purchased online and the company has a reputation for quality and reliability. Full uniforms can be brought or individual items to allow re-enactors to build up their uniform. Among the items for sale to depict Luftwaffe SoF have pilots’ jackets and caps along with medal ribbons for campaigns and service. Shoulder boards for branches within the Luftwaffe such as anti-aircraft artillery are available and badges for units such as the ‘Condor Legion’ which was a volunteer unit that served in Spain during the Civil War is something very different.

Soldier of Fortune has a comprehensive range of items for the RAF and USAAF from caps and badges to service dress uniform for officers. A very nice reproduction line of sheepskin jackets as worn by flying crew looks very much the business for RAF pilot re-enactors. For USAAF air crews SoF offer kit bags, medal ribbons, badges, life preserver, B2 flying caps and full uniforms. Indeed, everything an aspiring airman could want. These reproduction uniforms are perfect for recreating static displays along with original wartime items that have been collected. Likewise, they are perfectly suited to allow a group to build up a display around a replica aircraft and by adding extra components like tools or bicycles more authenticity can be achieved.

Re-enacting air forces is one of those areas which can be continually developed to portray a range of scenarios. If the groups depicting the war in North Africa with the Afrika Korps and Desert Rats, then the groups depicting Luftwaffe and RAF could recreate scenes to show aircraft in the desert. There are some very famous photographs which could be used as a starting point. The aircraft would have to be painted in the correct colour scheme and the correct uniform worn, but such challenges are met by re-enactors. I have seen dispersal huts recreated and the effect was very good as the pilots rushed out to ‘scramble’. Unfortunately there were no aircraft! Yet the action was lively and recreated the sense of urgency of getting into the air.

Whether wholly original, an amalgam of original and reproduction or completely reproduction the depiction of air force units adds to any show. Male and female can join together just as they did during the war. In 1945 there were over 150,000 personnel serving in the Women’s Auxiliary Air Force and some 6278 officers, a fact which presents the ladies with a wide range of opportunities. The RAF was a multi-national and multi-cultural force and it would be good to see more portrayals of this at events. Vehicles in RAF or USAAF colours compliment displays and pilots sitting in the cockpit or on the wings of an aircraft make people take notice. I have a feeling that this is a side of re-enactment which is set to get a lot stronger.