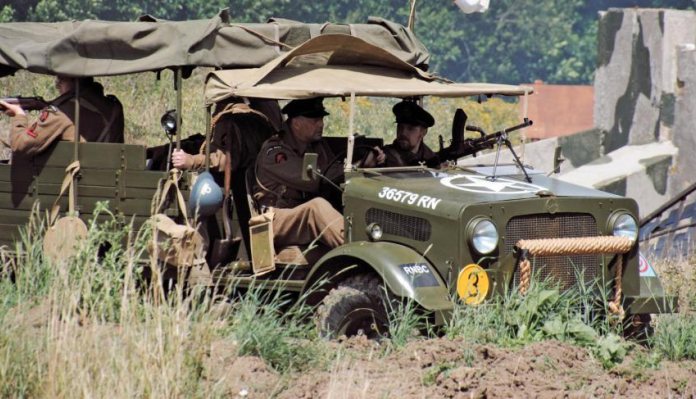 It all began with the purchase of a Royal Navy officer’s cap from the Second World War. John Ruffhead is a militaria collector with a keen interest in naval artefacts and when he saw an officer’s cap for sale, he couldn’t resist buying it to add to his collection. Then, as sometimes happens, one thing led to another and, following some research into Royal Navy Beach Commandos, in 2016 he formed a small re-enactment group called the ‘Romney Marsh Beach Commando Re-enactors’.

I discovered all of this when I met John and the rest of the group at this year’s War & Peace Revival back in July. Their display included a Bedford MW ‘Aeroscreen’ truck for transport and although relatively compact, the level of attention to detail is excellent and the collection of weapons and other equipment one of the finest I have seen in a long time. As I began taking photographs and asking questions, I was invited to take a seat and have a chat.

It was explained that, since being formed, the group had taken part in a handful of small local events, but W&PR was their first big event. Some of the group knew the show, having previously visited but as buyers to collect items for their display. Now, it was their turn to show what they had and very good it was, too. The most unusual aspect about the Beach Commandos is the fact they wear British army battledress uniforms, but everything else is Royal Navy, including the headdress and badges of rank.

As a unit, the Royal Navy Beach Commandos were formed quite late in the war, being raised in 1942, with their first operation being in May that year to capture the port of Diego Suarez on the island of Madagascar, which was held by forces loyal to Vichy France. The idea stemmed from Combined Operations, established in 1940 by Admiral Roger Keyes, who was later replaced by Lord Louis Mountbatten. The role of the Beach Commandos was to go ashore before the main landings and establish a secure perimeter and guide the assault forces into their designated points. Afterwards, they would continue to operate and be among the last to leave the area. The role of the unit was described in its motto; ‘In Primo Exulto’ which means ‘First in Last Out’.

At a show which is predominantly army, a group depicting any Royal Navy unit really stands out at W&PR. The RMBC have done superb research and were more than happy to discuss the wartime role of the group and how they feel privileged to be able to commemorate the men who served in it for real. Training for the commandos was carried out at Achnacarry in Scotland and the men took part in all the major amphibious landings during the war, including the disastrous ‘Operation Jubilee’ at Dieppe in August 1942, where they learned many lessons.

At the time of our meeting, all this was new to me and John, along with other members of the group, explained how the Royal Navy Commandos took part in the landings in North Africa, Sicily, Italy, Normandy and Europe. The idea led to the creation of similar units in the Royal Canadian Navy and even India, where units took part in operations in Burma. As John described it, the unit was ‘born out of necessity’ and by the end of the war had 22 operational units. Yet, for all this history and its important role, it remains a littleknown unit.

The RMBC wear reproduction British army battledress uniform, which they purchased from Corwen-based Soldier of Fortune in Wales (www.sofmilitary. co.uk). The group explained that this was the best solution for them and given that the company also supplies the Combined Operations badge, comprising an anchor crossed by an eagle and Thompson submachine gun, it also made sense. The headdress is also reproduction, but they have been given a bit of attention by the members of the group to give the caps a ‘worn’ appearance for authenticity.

The webbing is original and in keeping with the equipment used by the Royal Navy Beach Commandos. Weapons used by the group for their displays and demonstrations are all legally deactivated and purchased from either D&B Militaria (www. dandbmilitaria.com) or Chelmsford Militaria (www.chlemsfordmilitaria.com). As commandos, the men are armed with infantry weapons, which includes Thompson sub-machine gun, Lewis and Bren machine guns, No. 4 Lee-Enfield rifles and the Lanchester sub-machine gun, which was uniquely used by the Royal Navy. As an officer, John Ruffhead carries a Webley revolver, as befits his rank.

At present, the group is only several members strong but it works very well at that size because they can all fit into their Bedford truck to take part in mobility demonstrations. Among the other equipment that forms part of their display is radio and field telephone, just as would have been used to direct the landings during operations such as Normandy.

The appearance of soldiers wearing naval headdress does take some people by surprise and when the RMBC explain their depiction, it all becomes clear. We take it for granted that somebody had to be first on the beach during an amphibious landing and now there is a group which depicts it admirably and explains the history concisely, holding your attention and illustrating certain details with some extraordinary photographs.

This is what re-enactment is all about; recreating a moment in history or depicting a unit which is very unusual and the RMBC do both these things. The Royal Navy Beach Commandos were an elite unit and whilst their short history ends with the end of the war, the importance of their role continues to be told and remembered through the displays of the RMBC. Three years is not a long time for a group to be in existence, even for the war, but they certainly managed to pack a lot into those three short years. As with other groups, the collection being built up by the RMBC is a work in continual process, with new items being added all the time. Only by doing so are they able to increase the size of their display and add to the understanding of its wartime role.

So, next time you are walking around an event somewhere in Kent, keep an eye open for the Romney Marsh Beach Commandos, they just might be there. If you do drop by, to talk to them you are guaranteed a warm welcome from this very friendly and well-informed group. Alternatively, if you wish to know more they can be contacted by Facebook at @RMBC42 or by email at: rmbc42@gmail.com.