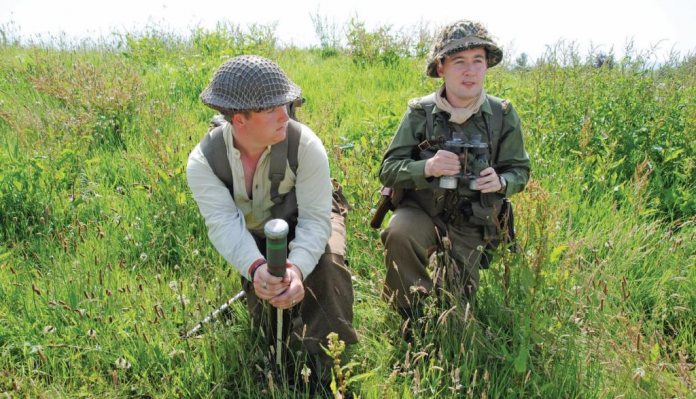 When the 1st Battalion the Dorset Regiment landed on Gold Beach on 6 June 1944 as part of the 231st Brigade of the 50th Highland Division it already had a long a distinguished history. As it made its way up the beach at Normandy it was beginning the next chapter in its history by adding another battle honour to its already impressive list which included Albuhera, Sevastopol, Mons and Ypres. With the regimental motto of ‘Primus in Indus’ (First in India) and origins dating back to the 18th Century, the Dorset Regiment was used to making history. By the end of the war the 1st Battalion would add twelve more battle honours to the regiment’s credit.

Today, the battalion is remembered by the re-enactment group which uses the battalion’s designation as its title to be known as 1st Battalion The Dorset Regiment (Living History Association). Formed about ten years ago, it has undergone some changes in recent years, all for the best and by 2014 had established itself as one of the finest groups to represent an infantry battalion of the British army during WWII.

The 1st Battalion Dorset Regiment was never quiet for very long during the war, being part of some operation, campaign or defence somewhere. Between 1939 and 1943 it was posted to Malta where it formed part of the garrison to defend the island against attack. The battalion was on the island during the height of the air raids and the men served in many duties, including manning coastal defences against the event of an invasion and clearing up operations after the air raids. In 1943, the 1st Battalion took part in Operation Husky, the Allied landings on Sicily, where it served as part of XIII Corps. From here in September 1943, the battalion went on to take part in the amphibious landing Operation Baytown to invade Italy.

With such experience following two amphibious operations, in November that year the 1st Battalion found itself posted to Inveraray in Scotland, where the men learned more skills at the Combined Operations Training Facility. What the men did not know was that it was in preparation for yet another amphibious landing, this time Operation Overlord. As they fought their way through Tilly-sur-Seulles in the summer of 1944, the men of the battalion probably had the most experience in amphibious landings. Even so, they would have been grateful for those extra skills learned in Scotland. Indeed, those same skills would stand them in good stead as the battalion battled across Europe and in the process earning twelve more battle honours, including Arnhem, Rhine, Aam and Geilenkirchen to go with Sicily and Malta.

As can be imagined, the casualty rate in these operations was high. In Malta the battalion lost 33 men killed and the campaign on Sicily cost them 63 killed and over 120 wounded. By the end of the war the battalion had lost 327 men killed and over 1000 wounded. It is this history and sacrifice which the 1st Battalion Dorset Regiment re-enactment group is commemorating with its depiction. It was not by random choice that the group decided to depict the 1st Battalion the Dorset Regiment. Some members of the group have served in the regiment, whilst others have family connections with it. With such strong personal associations, it was a foregone conclusion that the group should depict the battalion.

It was at this year’s Tankfest at the Tank Museum in Dorset, over the weekend of 28-30 June, that I got the opportunity to find out more about the group. One thing which struck me was the very noticeable age difference between the young officer and the older NCOs. This is exactly as it happened for real during Normandy and the later campaigns and comes through in memoires such as Sydney Jary, himself a young officer, in his fascinating book ’18 Platoon’ in which he recounts his time as a platoon commander serving with the 4th Battalion Somerset Light Infantry in Normandy. The uniforms worn by the men in the group are those of an infantry unit in combat, from the helmet and webbing right down to the boots. This continues with tactics of the period to show how weapons such as rifles and mortars, were used by the infantry the war. Another aspect to the group is its static display around the camp which shows other items of kit used by infantrymen in war, along with the heavy weapons, such as the three-inch mortar, which also includes a specially adapted blank-firing version for use when taking part battle re-enactment displays.

As an infantry section moving on foot each man carries his own rifle and for fire support a 2-inch mortar is available and the Bren Gun group adds to that. The men can also carry hand grenades and shows what was used at platoon and rifle section level to attack machine gun positions and clear the enemy from buildings. Officers wore revolvers in holsters attached to their belts, but Sidney Jary, in his book 18 Platoon, writes how he favoured a Colt .45 pistol. Weapons, such as deactivated rifles, used by members of the group have been purchased from companies such as World Wide Arms (worldwidearms.com) and D&B Militaria (dandbmilitaria.com)

Uniforms are reproduction and these are purchased from companies such as Epic Militaria (epicmilitaria.com), Soldier of Fortune (sofmilitary.co.uk) and the American company of What Price Glory (whatpriceglory.com) Miscellaneous bits and pieces are picked up at militaria fairs and car boot sales whilst regimental and divisional badges are obtained from Montys Locker (montyslocker.co.uk) As all experienced re-enactors, they also pick up other items as and when they see such useful bits of kit.

The group maintains strong links with the Dorset Regimental Museum in Dorchester (keepmilitarymuseum.org) and has a full diary of events which sees it attending Tankfest at the Tank Museum in Dorset. Another venue attended by the group is the Castletown D-Day Centre on Portland in Dorset (castletownddaycentre.com), where it puts on special ‘Recruiting Weekends’ where re-enactors can find out more about the group. For next year, it has been invited to take part in the Dig For Victory Show, organised by James Shopland and is being relocated to a new venue at Ashton Court Estate in Bristol. For full details of this, visit the website at: digforvictoryshow.com

Further ahead, the group is making plans for a big turnout in Normandy for 2024 to commemorate the 80th anniversary of the D-Day Landings. It may sound premature, but really it is not that far off. Planning at this stage can only make it a successful tribute. If anyone facies joining the ranks of the 1st Battalion Dorset Regiment they can contact the group through Facebook by typing in the search request at: facebook.com/Dorsetslhg/posts